END_OF_DOCUMENT_TOKEN_TO_BE_REPLACED

Judged as a percentage of global investable paper, Gold may have further to run amid this financial crisis...

ARE YOU RUNNING into YEAR-END 2008 with a hatful of fears, losses, hopes and questions?

Here's another puzzler to ponder as the $3 trillion of tax-funded bailouts now promised worldwide slowly roasts every bond-holder's goose over Christmas...

Judged as a percentage of global investable paper, Gold hasn't been this strongly-weighted for the last 15 years.

But seeing how this financial crisis is the ugliest since the Great Depression, World War I or perhaps even earlier (depending on which political hack, wonk or meddler you speak to), it could still double again – if not rise more than ten-fold.

Either that, or the value of paper assets – meaning stocks and bonds – could tumble in half. If not sink by more than nine-tenths (depending on which historical measures you use).

Yes, the numbers are rough. But no, we're not kidding. No more than anyone else. 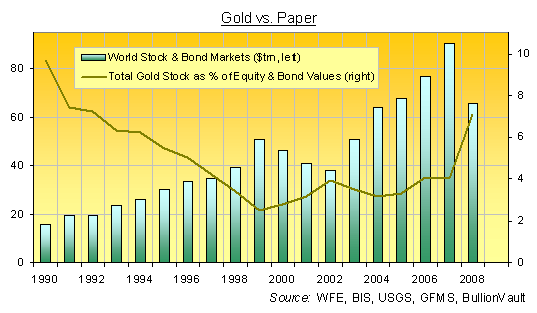 Tessa Jowell, a UK minister, reckons this downturn is "deeper than any we have known." Mervyn King, head of the Bank of England, says it's the worst financial crisis since before the Great War.

And given that "when investor stress reaches extreme readings" people Buy Gold – as John Hathaway at Tocqueville Asset Management put it in a 2006 paper – then we should expect the valuation of all the gold-in-the-world to rise accordingly.

People turn to this rock, after all, when paper's too scary to own. Have we reached an "extreme" amid this financial end-of-days...?

First, let's try (if we can) to ignore the $596 trillion-worth of "notional" value outstanding in credit, currency, stock-market and collateralized derivatives.

Let's also put the Western world's real estate markets to one side, as well. The idea that housing is a tradable asset only shows up every generation or so. In between, the slumps and dips just make bricks'n'mortar somewhere to live in – not retire on.

That leaves us, pretty much, with stocks and bonds. And as the good folk of World Financial Exchanges will show in their data just as soon as 2008 croaks out, last year's peak of $90 trillion is set to take a knock. By our reckoning here at BullionVault, in fact (and with thanks to the Bank for International Settlements' latest figures), that gross market capitalization will show a fall of one-quarter and more in global equities and tradable debt.

On the other side of the trade, in contrast, Gold Priced in Dollars actually rose in 2008, notching up its seventh annual gain on the trot. (That's not to say it won't fall next year; for now, the Gold Price in 2009 is not our beef.) And with the total, above-ground-stock of gold now standing around 165,500 tonnes (guess-work courtesy of GFMS, the World Gold Council and ourselves), that puts the notional value of all gold ever mined in the world at some $4.6 trillion.

But comparing all the gold-in-the-world against stocks and bonds shows a far less than "extreme reading" for investor stress. So far, at least.

Back in 1980, for instance – when the Iranian crisis and war in Afghanistan last sent gold to a nominal peak at $850 an ounce – "the $1.6 trillion invested in gold exceeded the market value of $1.4 trillion in US stocks," according to Peter Bernstein in his classic tome, The Power of Gold.

US equities today stand closer to $13 trillion. Every ounce of gold ever mined is worth barely one-third.

Put another way (and yes, the numbers are rough once again), "We calculate the market cap of all above ground gold, including central bank reserves, equals about 1.4% of global financial assets," wrote Tocqueville's John Hathaway almost three years ago.

In short, the mass people choosing to Buy Gold today remains tiny compared to the value which the world still puts on paper. And it's only when paper collapses in value – an event you might expect during the worst global crisis since WWII – that gold is likely to hit its true peak for this investment cycle.