END_OF_DOCUMENT_TOKEN_TO_BE_REPLACED

RHONA O'CONNELL did it on the train home, John Reade managed it before the conference finished, and Ross Norman's team were at it throughout.

No chance then of our being the first members to reflect on this week's LBMA Conference in Edinburgh. But BullionVault can at least relay a taste (minus the fine malts and bagpipes), and we might get to have the last word as well.

Because India's IMF gold news stole the headlines even before Tuesday's speeches began, and gold itself has since grabbed the limelight, hitting fresh all-time highs against the Dollar and Rupee (and Chinese Yuan, note).

Be sure to check both Rhona's comments at MineWeb and what FastMarkets say at TheBullionDesk. (John Reade's conclusions have yet to reach the LBMA website.) For us, three points stand out from the tenth annual conference of the London Bullion Market Association.

#1. Utterly Bullishly
Bears don't fill hotels, and Edinburgh was the first LBMA conference to pack the available space, drawing a long (and disappointed) waiting list too. More than 300 people attended the tenth but first such UK event, and it was no surprise to learn that four-in-ten delegates worked at either brokers or banks. Listening to the official speakers, however, it was a shocker to find the supply-demand view of gold – the commodity view – so fast in retreat.

Consumption destruction, mine output up 6%, a flood of Cash4Gold-inspired scrap...Roll on the Eeyores saying it could not last, or so we imagined. Plenty of speakers (and guests) did cite gold's "unsustainable imbalance", but only to dismiss what it might mean for near-term prices. Because 0% rates, yawning government debts, and the slow, ineluctable shift of Western power to gold-friendly Asia won't be beat.

Or as Irish and former UBS economist David McWilliams neatly put it, "The Chinese proletariat is seizing the means of production using worthless Dollars earned from the United States" – a fact so hard to ignore, it adds up to $1181 gold and $18.10 silver by November 2010, at least on Tuesday's average guess from the floor.

Amongst the opening day's speakers, Aram Shishmanian, CEO of the World Gold Council, was due to speak on "Issues Facing the Jewellery Industry". But he said straight off he wouldn't bother with that, switching instead to what's driving investment and safe-haven flows. Mehdi Barkhordar of Swiss refining group MKS then spoke on the surge in Gold Bar and coin demand, noting "a new Western mindset" more typically seen driving Eastern gold hoarding:

The real "impact of the financial crisis" (as per Barkhordar's title) was in fact 2008's squeeze on vaulting space and refining capacity, plus new opportunities in small-bar and coin fabrication. Coming out of that crisis into whatever crisis awaits, "There is a fundamental shift in the dynamics of the gold market," concluded MKS's managing director.

#2. London Rules But Rocks
Innovation in gold products – and maintaining London's No.1 spot – was a hot, heated topic, much discussed away from the dias and breaking onto the stage in the last-but-one session.

To be sure, innovation would have a good way to go to beat Julius Bär's "legal engineering", building physically-backed funds and products (seems there's a difference) whilst also shorting the Dollar. This gives Swiss money "maximum participation in the price movement of the underlying" according to Bär's product engineer Stephan Mueller, an objective which caused much head-scratching (well, at least at the back...) and apparently took UBS's chief commodities strategist a couple of years to fathom as well.

"Once in gold, you're short all currency," said John Reade in his summing up, before explaining that, one day, he got it. "Our Swiss clients wanted to be long of gold priced in Dollars." Which still sounds like two trades at once to us. And why not buy gold and sell the Dow (367% gains in 10 years), or better still the Rupee (down vs. the metal in 26 of the last 38 years)...?

Over in the physical 400-ounce gold market, meantime, the Lehmans' crisis confirmed London's dominance of physical storage and professional trading according to pretty much everyone, with metal heading this way from Zurich according to MKS. James Steel of HSBC also noted London's odd but continued dominance of wholesale silver, picking up pretty much where Spain's Latin American empire collapsed and coming despite Britain having no silver mining, refining or sizeable consumption.

London's reign is set to persist, Steel said, thanks to the infrastructure (vaults, assaying and dealing) which that very dominance built. And on the subject of silver, industrial bulls should check the speech from the VM Group's Jessica Cross... 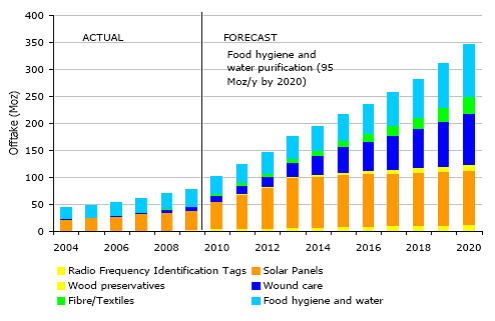 Back in London meantime, the Bank of England now stores some 400,000 gold bars in its vaults, said foreign exchange director Michael Cross, worth $100 billion. That would mean some 2850 tonnes – second only to the US and Germany's hoards, but with well over 90% in custody (and sub-custody) accounts, rather than held as the UK's own official reserves.

So far, so good – if not complacent. The conference wasn't quite so at ease with deciding how to maintain London's lead in precious metals worldwide. And seeing how the Association is only that (albeit applying strict membership and code of practice rules), bringing the various member firms together to agree a global strategy would seem a big ask. The Good Delivery list sets the standard for new exchanges and products worldwide, which given the challenge ahead (from new localized products in local currency terms, as Julius Bär's Mueller observed) might prove good enough. Word is, however, that the issue of cleared forwards will be addressed – if not resolved – in the very near future.

#3. Central Banks Now Buying Gold
Okay, so it's hardly news after Tuesday's IMF announcement, and the GFMS consultancy (which is only slightly less cautious than central banks) said as much in April:

Central banks would likely be "net buyers" this year, with purchases outweighing sales. So what? Well, hearing that same forecast – or something very much like it – from a senior manager of the European Central Bank, thats what.

The first central banker to address the London Bullion Market Association since Philipp Hildebrand of the Swiss National Bank spoke in Montreux in June 2006, the ECB's principal advisor in market operations didn't bring down the roof. "I wouldn't be taking a huge risk to imagine that official holdings of gold [globally] will stabilize or increase," Paul Mercier said, adding that "I must stress that gold is still a vital asset for Europe's central banks."

But while that's no news to money historians, it's in fact a powerful statement from a central bank official – with or without advance knowledge of India's impending 200-tonne purchase. And reviewing my notes on the plane home, you might think Paul Tudor Jones, David Einhorn or even Jim Rogers had put Mercier's speech together.

"Why do we have gold?" he asked, before citing economic security, the capacity to deal with unexpected events, adding confidence to paper currencies, and risk diversification. Pretty much the same advantages were named by a French central bank at the start of this decade...and France then went on to sell gold from its vaults, cutting its holdings by one-sixth to 2,500 tonnes. But Hervé Hannoun spoke after gold had been falling for almost two decades. Whereas Paul Mercier spoke this week after 10 years of gold beating everything else – a period, as he noted, which also saw "the largest-ever reduction in official holdings, a reduction of 3,700 tonnes."

Take it as the ultimate contrarian "sell" if you wish. But given what everyone I spoke to thinks is the fate of the Dollar (let alone Sterling...or Euros), M.Mercier's carefully-phrased forecast looks a safe bet.

And as for Asia's growing private demand... 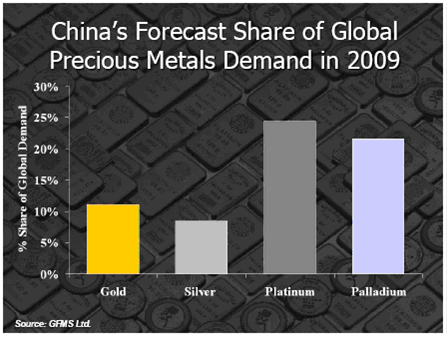 BullionVault has noted before that

has doubled as a percentage of its ever-growing annual savings over the last 10 years. In full-year 2008, basis World Bank estimates and GFMS data, gold swelled to equal 1.8% of saved household incomes.

But looking at Phillip Klapwijk's chart above, as John Reade suggested in his summing up, there's plenty of scope for further growth yet. China's gold demand has lagged behind the platinum-group metals – which are more in line with its share of global demand for base metals and concrete.

China's private market is hardly deluged with gold at this stage. And that's with or without the People's Bank nabbing part II of those IMF sales.