END_OF_DOCUMENT_TOKEN_TO_BE_REPLACED

Yes, gold has risen 12 years running. But compare its path with US stocks...

SO the WORLD DIDN'T END on the shortest day of 2012, writes Adrian Ash at BullionVault, as forecast by no-one beyond lazy journalists and internet frauds.

But the long bull market gold has choked its last. Or so some soothsayers claim.

Bloomberg: "Gold, [enjoying] its longest winning streak in at least nine decades, is poised to enter a bear market..."

Interactive Investor: "Is gold's bull market over? Market commentators [are] citing a tumultuous economic environment. Others say it has simply been over-bought, and as with each bull market, inevitably reach[ed] a point of resistance..."

MarketWatch: "Gold bugs are finally throwing in the towel. Over the last two weeks [they] have become even more discouraged than they were at the end of November. And that’s saying something..."

Okay, we were kidding. These 3 stories in fact came at the end of 2011. But with the big top of summer last year now a distant memory, and with prices this week unwinding all of 2012's gains for Euro and Sterling investors, you could book your path to the US Treasury, running Italy, or getting a $400,000 annual housing allowance from the Bank of England by saying gold is spent today.

"Goldman Sachs...are among those calling the end of the gold bull market," reports Portfolio Adviser, "having recently trimmed their 2013 forecasts to $1800/oz."

Whatever the reality ahead, gold has certainly done an odd thing in 2012. Odd for the last 13 years at least. Because it failed to beat the US stock market's annual gain – the first such failing since 2004, and only the third time since 1999. 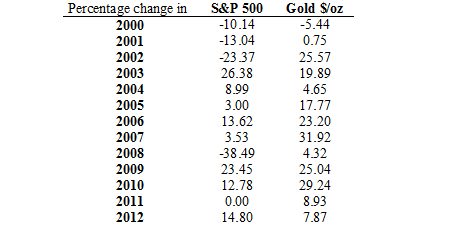 What to make of this underperformance? Well, if you missed all of that 14.8% capital gain in the S&P500, then a measly 7.9% return on your gold might be scant comfort. But it does continue a broader trend, dating back a whole decade.

Gold and the stock market both rose together this year. Only twice has that failed in the last decade, once when stocks sank (2008), and once when they were flat (2011). 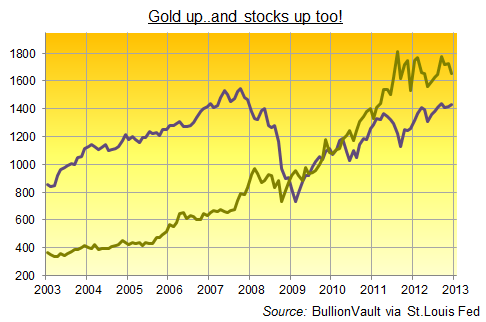 What gives? Isn't gold supposed to rise when stock markets plunge, and vice versa? But really, that's such a 20th century idea! 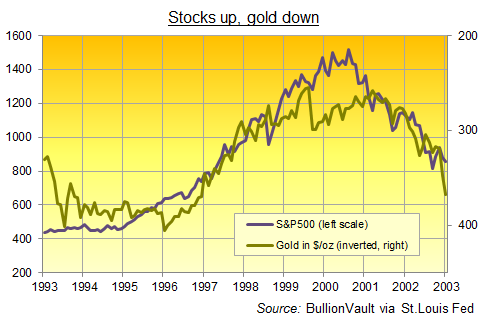 Go back 20 years, and flip the price of gold upside down. As US stocks rose, the gold price fell, all through the mid-to-late '90s. It wasn't early 2001 that gold found its floor – shown as the second peak on our inverted chart.

And from there, the Tech Stock Crash came right alongside the start of gold's now 12-year rise...a rise which stocks joined again just as soon as near-zero interest rates were applied in 2003.

Yes, the common link we believe has been cheap money. On the one hand it has driven investors back into stocks (and back again thanks to truly free cash and quantitative easing since 2009). On the other, it has driven a small but growing band of people worldwide to abandon a chunk of their cash, swapping it for a lump of metal instead. And overall, gold has outperformed by not sinking in the middle.

Scarce and incorruptible, unlike common stock, gold has thus acted as a great hedge for stock market bulls, rising both with and despite the action in equities. But being rare and indestructible, gold has yet to find its true calling in the early 21st century we predict, squinting into the future just like ancient Mayans didn't.

We think gold looks good insurance against that other all-rising bull market, the all-inflating credit bubble that is the 32-year non-stop bull market in US and other Western government bonds.