END_OF_DOCUMENT_TOKEN_TO_BE_REPLACED

Told you once, told you 98% of the time...
ROLL BACK to Tuesday, 4th May 1999, says Adrian Ash at BullionVault.
The US stock market has risen 10-fold over the previous 2 decades...
...and stocks now keep setting fresh all-time highs as the "information super highway" sees investors large and small bet big on anything with "dot com" in its name or prospectus.
Gold in contrast is flirting with fresh 2-decade lows, losing two-thirds of its US Dollar value from the inflation-crisis top at $850 per ounce of January 1980.
Cue the New York Times:
"Who Needs Gold When We Have Greenspan?"
So asks the headline on columnist Floyd Norris' view of the metal as central banks across the world sell off ever-more of their bullion reserves.
"The process of removing the glitter from gold has been a gradual but inexorable one," Norris writes.
"Gold's reputation as a store of value has eroded...Much of the world is now quite happy to accept the idea that a greenback backed by [then US Fed chairman] Alan Greenspan is just as good as one backed by gold." 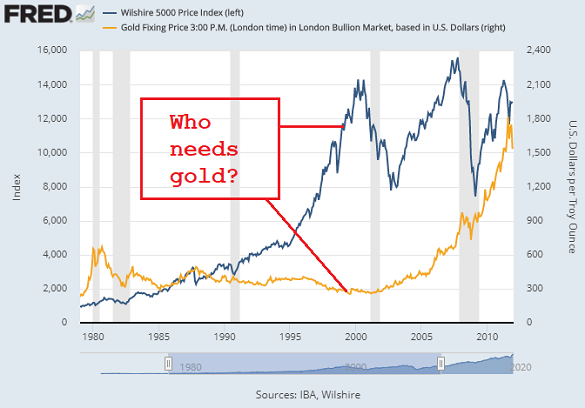 Fast forward to Friday, 17 July 2015.
Gold is sinking again...losing 40% from its financial-crisis top of $1920 set a little less than 4 years before.
The US stock market, in contrast, is again making new all-time highs...rising 3-fold from its Lehman's crash low and beating its 2007 top by 39%.
Cue the Wall Street Journal:
"Let's Be Honest About Gold. It's a Pet Rock"
So says the headline on columnist Jason Zweig's view of the metal.
"Many people may have bought gold for the wrong reasons...[from] its glittering 18.7% average annual return between 2002 and 2011, [or] because of its purportedly magical inflation-fighting properties, [or] because it is supposed to shine in the darkest of days.
"But gold's long-term returns are muted, it isn't a panacea for inflation, and it does well in response to unexpected crises, but not long-simmering troubles." 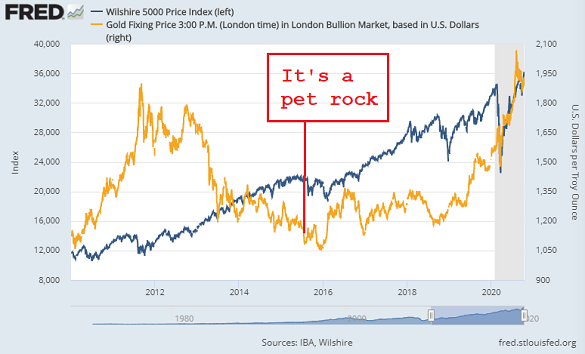 Now fast forward to October 2020.
Tuesday 13 October, in fact.
"If you think gold protects your portfolio from a stock-market plunge, you might be disappointed," says Jason 'Pet Rock' Zweig on Twitter, linking to a new article from his Wall Street Journal colleague James Mackintosh.
"Gold's role as a hedge depends on the risk you are trying to protect against, and it has its uses," that new article says.
"But...when stocks fall, investors want a diversifier that rises in value to cushion the loss. [Yet] gold fell alongside stocks during the market panic in March and again last month, and might continue to move with stocks for some time."
So far, so true. And Mackintosh's columns – like his previous work at the Financial Times – always take the big picture and ask valuable questions. In this instance, comparing how and when gold has 'worked' or 'failed' in the very recent past.
It's worth a read for sure. And by avoiding a stupid one-line conclusion, it also risks much less irony as a turning point for gold or the stock market. Not least because both have done so well together amid the horror of 2020.
But that doesn't mean it's not wrong. Not out where it matters.
We have pointed this out before, more than once. Here x 3 for instance:
Stocks Down, Gold Up 98% of the Time
Gold Investing Working as Hoped
Fed Rates or Stocks: Which Matters More to Gold?
And also for UK investors too:
FTSE Down? Gold Up 96% of the Time
Gold: If Only the 'Smart Money' Could Buy
But the idea still persists that gold *should* jump when stocks fall, and so the metal is broken...failing...pointless...if that doesn't happen or sticking your finger in the air says it won't.
So, once more then, with feeling...!
First, gold shows no pattern of jumping when equities crash. The WSJ gets that much right, but only by pointing to the Lehman's crash of 2008 or the Covid Crash of March 2020. Which simply misses the point.
That's because, over the last half-century...that period of history since gold was cut free from a fixed price, and money itself floated away from that anchor...it has been a coin toss whether gold would rise or fall in opposition to stocks week to week.
Seriously, it's pretty much exactly even odds that gold will "work" or "fail".
Month-to-month too. Gold shows no pattern of rising when share prices fell...or falling when the stock market rose...from 4 weeks earlier.
Nor does this only apply to US Dollar gold prices versus the S&P 500 index.
It is also true for gold priced in UK Pounds versus the FTSE All-Share...
...and also for Germany's CDAX index of shares versus gold priced in Euros and before that, gold priced in the Deutsche Mark.
Take your pick and take a bow. There is zero correlation week to week or month to month.
But please, do the maths first. And then pull out a little further...
...and look at the 12-month pattern...
...or better still, look at all 5-year periods.
Why half-a-decade?
It's because 5 years represent the kind of time-frame you might actually want to plan for...
...a length of time where losses in equities really do hurt...
...messing with your savings and spending plans, potentially even pushing back your retirement date or hitting the level of post-work income you can buy with your pension pot.
Out here on a 5-year horizon...far beyond the gaze of newspaper pundits...gold actually does show that pattern of offsetting losses in shares which columnists like to say it should show week-to-week or month-to-month...
...right before they dismiss it as "failing". 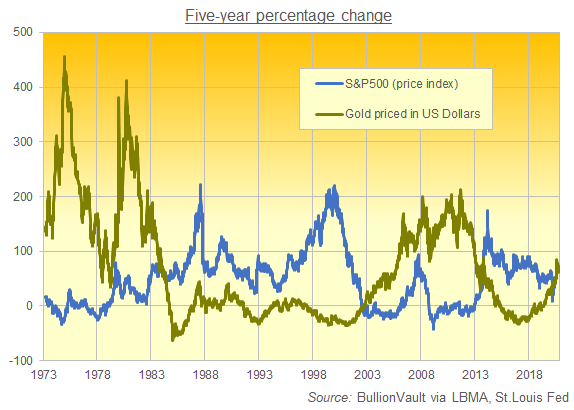 This chart shows data from across the last half-century, taking gold and stock prices each Friday evening.
Across that time, the S&P500 index of US corporations has traded below its price level of the same weekend 5 years earlier some 22% of the time.
On those occasions, gold prices were higher from where they stood 5 years earlier 98% of the time.
For UK investors in the FTSE All-Share that figure is 94%. For German investors in the CDAX it's 90%.
So is gold a perfect hedge? No. Instant? No. Guaranteed? Of course not.
But on 5 decades of data, it's perverse to deny that investors are right to consider gold as an equity hedge, never mind label it useless or ineffective.
It just depends on your time frame.
Bottom line? If you fear that the stock market is going to plunge next week, buy a put option or sell the stock market short with a spread bet.
Don't expect gold to bail you out. It failed to work that way in March. History says it never promised to.
But if you want to defend your savings into the future, think instead about gold.