END_OF_DOCUMENT_TOKEN_TO_BE_REPLACED

Gold's Pound Sterling returns on 5-year horizons...
With LONDON's FTSE index setting fresh all-time highs this spring and US stocks also now heading to reclaim January's peak, it's natural to think about locking in some of the last decade's gains, writes Adrian Ash at BullionVault.
The FTSE 100 has now more than doubled from its crash lows of the financial crisis (+124% from March '09) and the US S&P500 has almost tripled (+290%).
If you decide to take some money off the table, what might prove a good way to store it? And what might be a good way to buy some kind of insurance for the money you leave invested in the stock market?
Gold is often seen as a stock market hedge, a form of insurance to buy when equities fall. That's because a lump of physical bullion is so unlike a share of a productive business. Gold cannot lie about its earnings (it doesn't have any) or go broke.
It does so little in fact, it doesn't even rust.
That means it tends to underperform when other assets do well. Because in all ages and all cultures in history, gold's primary use – whether as jewellery, coin or central-bank reserves – has been to store value, rather than grow it.
So is now a good time to buy?

To track how US stocks are performing versus their opposite, some analysts in the States follow the Dow/Gold ratio. It simply divides the Dow Jones Industrial Average by the price of gold. That shows how much one unit of the DJIA would cost in ounces of gold.
To measure how UK shares are performing over the precious metal, BullionVault's equivalent – the All-Share/Gold ratio – divides the FTSE All Share (price index) by the gold price in Pounds per ounce. 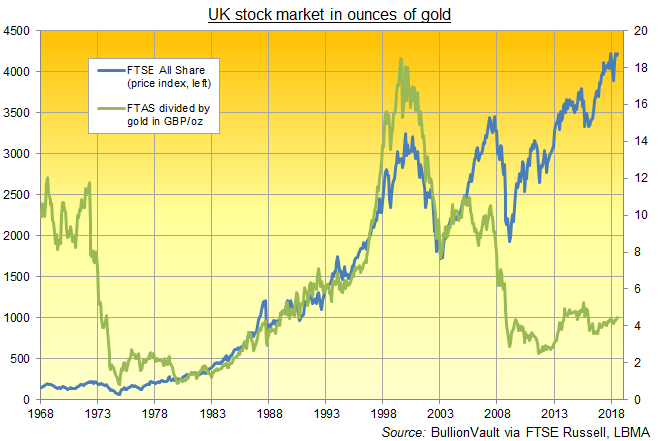 Over the last half-century the AS/Gold ratio has read 6.1 on average. Its low of 0.8 came in 1974 and again in 1980. The ratio peaked at 18.5 in 1999, falling to 2.5 as shares sank and gold soared over the following decade.
Currently the AS/Gold ratio stands at 4.5 – pretty much its median of the last half-century (half of all months it was higher, half  lower).
That suggests London-listed shares are fairly priced in terms of gold right now. But it also says things could go either way from here.

Such protracted losses in shares are no small risk. On a 5-year horizon, the FTSE All-Share has traded lower one-fifth of the time since 1968. That is exactly as often (20%) as it has doubled or more.
Past performance is no guarantee of the future of course, and looking at longer time frames (eg, 5-year returns rather than monthly) will highlight historic events and trends, rather than any statistical pattern.
Also note that, in summer 1992, gold failed to rise when the FTSE fell from 5 years before (that's the "4% of the time" in our table above). Indeed, gold showed a 38% five-year loss against the Pound as the All-Share trade 5% lower from the same point in 1987.
That drop in equities drop came off the pre-Black Monday peak. It also marked the stock market's only pause during the 1980-2000 bull run. So if history does offer any guide, and you think that the FTSE's long-term direction points higher from here, you probably won't feel the need for insurance.
On the other hand, gold didn't always fall when the stock market rose over the last half century. So the stock market clearly isn't the only driver of gold's 5-year returns. And as we see from 1992, owning a little metal didn't always offset equity losses.
It's just that, in the main, that's how things have tended to work out. Just like they did for US investors since 1968 too.