END_OF_DOCUMENT_TOKEN_TO_BE_REPLACED

Private gold investing sinks as stock market teeters...
PRIVATE INVESTOR interest in gold has collapsed in 2018, writes Adrian Ash at BullionVault.
Any dealer tells you otherwise, they're lying.
What began as a Trump slump for US gold coin sales in 2017 has now spread to retail gold bar investing demand in UK and Europe.
Globally, Google search volumes for the phrase 'buy gold' have sunk to 2007 lows, back before the global financial crisis got started.
Existing gold coin and bullion bar owners have meantime turned seller, steadily exiting the stockpile they began building ahead of the financial crisis.
Why? Time is one factor. The banking crash now stands almost a decade behind us, and who remembers that?
Poor performance is another, at least against the straw man of gold's 'safe haven' appeal. Bullion prices have failed to surge in 2018 despite the jump in oil prices, the US-North Korea nuclear rumblings, Italy's new comedy coalition, slaughter across the Middle East, Britain's Brexit buffoonery, blah blah blah.
Most of all however, the New York and other stock markets have just kept on rising, setting new all-time record highs. This makes a lack of private-investor interest in gold look perfectly natural. If potentially stupid.
Because who needs investing insurance when equities have never been higher?
Here are 2 things to consider as the world burns and shares in listed corporations teeter near 2018's all-time record peak...

Gold is often seen as a stock market hedge, a form of insurance to buy when equities fall. That's because a lump of physical bullion is so unlike a share of a productive business.
Gold does so little, it doesn't even rust. It also cannot lie about its earnings (it doesn't have any) or go broke. In all ages and all cultures in history, its primary use – whether as jewellery, coin or central-bank reserves – has been to store value, rather than grow it.
To track how shares are performing versus their opposite, you could follow the Dow/Gold ratio. It simply counts how many units of the Dow Jones Industrial Average you could buy for one ounce of gold. 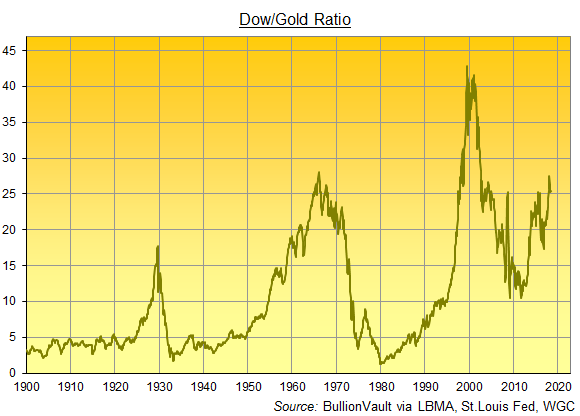 Over the last half-century, since gold prices broke free from their $35 per ounce peg to the Dollar, the Dow/Gold ratio bottomed at 1.2 ounces in 1980...peaked at 43 ounces in 1999...and averaged 15 ounces overall.
Half of the time it traded above 13 ounces and half of the time below. Right now it reads a little above 25 ounces.
So the stock market today looks somewhere between a bit and very over-valued in terms of boring old bullion. But so what?
History shows it trading both much higher and much lower than this. So on this point, no conclusion.

Over the past half century, investing in gold to protect against short-term drops in the stockmarket has failed to pay off.
Week to week, gold priced in the Dollar rose 51% of the time when the S&P 500 index rose, and it went up in 53% of those weeks when the S&P fell. Little better than a coin toss.
Judged on longer time frames however, the metal does show a 'safe haven' function, and increasingly so when stockmarket losses get worse. Since 1973, gold has risen from 12 months earlier in 55% of those weeks when the S&P was higher, but it rose 68% of the time when the US stockmarket had fallen from one year before.
This pattern is clearer still for 5-year periods. Gold rose 59% of the time when the S&P gained but it rose fully 98% of the time when the stockmarket had dropped from a half-decade before.
Five-year losses in stocks have been far from uncommon. Over the last 45 years, the S&P 500 price index has closed lower from 260 weeks earlier on nearly a quarter of all Friday afternoons. During those periods, gold's average 5-year gain was 135% (both mean and median). And during 20% equity slumps or worse, gold averaged 181% gains from a half-decade earlier, doubling or more on four-fifths of those occasions.
Again, you're wrong if you think a drop of 20% or worse in the stock market is rare across 5-year periods. It happened twice in the 1970s, again at brief points in 2003, 2004 and 2005, and then again with the 41% five-year loss of early 2009.
Past performance is no guarantee of the future, of course. It's simply that, over the past half-century, things just tended to work that way.

So, playing the odds, do you feel lucky?

If you think the odds of the stockmarket halving from here are zero, you probably want to own zero gold. That seems the view which a growing number of private investors who already bought gold are taking for the UK Spring and US Memorial Day weekends.
Whether these gold sellers are too late to join the bull run in stocks or not, only time will tell.
By then however, history says it will be too late to buy gold if it turns out they needed it to offset their equity losses.