END_OF_DOCUMENT_TOKEN_TO_BE_REPLACED

On a 5-year basis that is...
NOBODY CARES but we'll say it again, writes Adrian Ash at BullionVault.
Over the past half-century, gold has risen very nearly every time that the US stock market fell over a 5-year period.
Such protracted losses in stocks are no small risk. Or so history says.
On a weekly basis, data show the S&P500 price index trading below its level of 5 years earlier 23.3% of the time since 1968.
On those occasions, the stock market's average 5-year loss was 11.6%.
Gold's average 5-year gain, in contrast, was 133.7%.
This percentage includes that 2.0% of the time when gold didn't rise as the stock market fell.
In 11 brief weeks scattered between July and October 2002, the metal showed an average 2.9% loss from summer-and-fall 1997. The S&P meantime traded 8.1% lower.
You can see it here, on this chart of the data, where the gold and blue lines cross as the Tech Stock Crash really crushed equity portfolios. 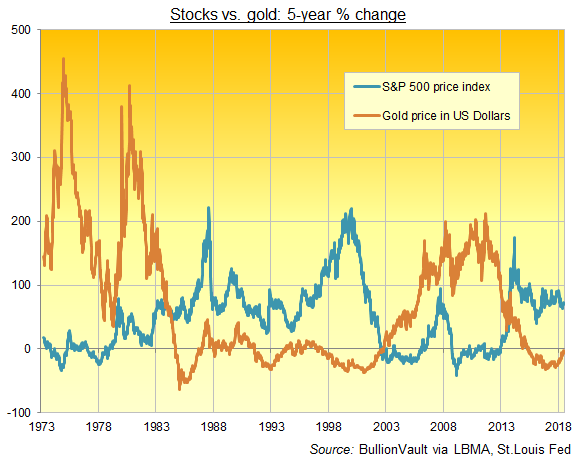 But so what? The stock market is 66% higher today from Independence Day 2013. It has tripled from where this bull market started almost a decade ago.
More importantly, the past is no guarantee of the future, as regulators like all good sales-men and women to remind you.
It's just that, well, this is how things have tended to work over the last five decades.
All but 2% of the time.
To repeat:
Over the last half century since gold prices were freed from their peg to the Dollar, the S&P500 has traded at a loss from 5 years earlier more than one-fifth of the time (price index, not including  dividends or costs or tax).
When that happened, gold prices traded higher 98% of the time. The metal's gains were, on average, over 11 times greater than the drop in US equity prices – meaning that a little gold went a long way to offsetting stockmarket losses.
But again, who on Independence Day 2018 might even need to care?
It's not like gold has managed to offset the stock market drop from January's new all-time highs.
And it's not like the vast bulk of investors – professional or private – think they need to worry about 5 years' time anyway.
2023 feels like an eternity away from here. By then, today will no doubt feel like a lost world too.
If not a lost opportunity.