END_OF_DOCUMENT_TOKEN_TO_BE_REPLACED

Excuse me Captain, but is this the flight to safety...?
WHY oh why isn't gold rising? asks Adrian Ash at BullionVault.
Damn stuff just sank, in fact...
...down a record-busting $200 per ounce by Friday's finish from Monday's new 7-year Dollar top...
...even as the global stock market put in its worst week ever outside the October 1987 Crash. 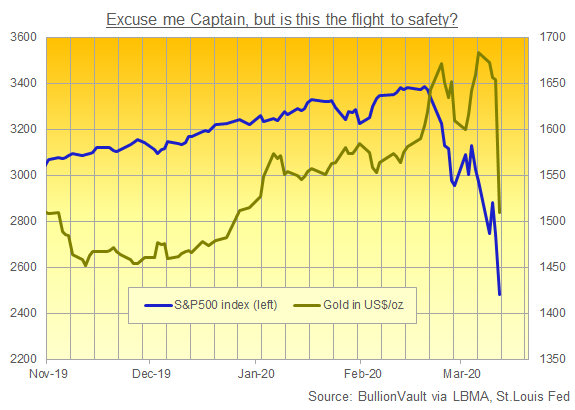 Call that a safe haven? What kind of insurance burns your house down? Isn't gold supposed to go up when stock markets fall?
It does, in fact, work that way. Or at least it has across the past half-a-century. Gold has repeatedly paid out when equities didn't since 1970.
Repeatedly? 94% of the time.
But not on a daily, weekly or even monthly basis. Instead – and both for US Dollar as well as UK investors – gold worked by rising when the drop in share prices was so prolonged that investors really needed some help.
Here comes the science, UK edition:
Day to day...
...since 1984, when London's FTSE100 share index was launched, gold has moved in the opposite direction to the gold price in UK Pounds per ounce 49% of the time. That same 50:50 pattern holds true over the last 1 year, 5 years, and 10 years too.
Week to week...
...the numbers pretty much even out to 50:50. Over the last 10 years, the price of gold in Sterling terms has moved in the opposite direction to the FTSE All Share 49% of the time (so yes, they moved in the same direction together in 51% of those 522 weeks). When the FTSE rose from a week before (56% of all weeks since March 2010) the price of gold rose 56% of the time. When the FTSE fell, gold rose 54% of time.
Month to month...
...it's pretty much a coin toss again. Since 1970, the FTSE All Share has risen in 60% of all months, while gold priced in Sterling rose in 54%. That same number, 54%, applies whether the FTSE went up or down. So much for 'safe haven'!
But year-to-year...
...shows a slightly different picture across the last 5 decades. Because while the FTSE rose in 71% of all 12-month periods, gold rose 63% of the time. That hit rate for gold splits between rising 60% of the time when the FTSE rose, and 68% of the time when the FTSE fell from 1 year before.
And across 5-year periods...
...in stark contrast to all shorter time frames, gold has offset losses in stocks time and again for UK investors. Because while the FTSE, on month-end data, has risen in 79% of all 5-year periods over the last half-century, gold rose 71% of the time. But that splits dramatically, with gold rising 65% of the time that the FTSE gained from a half-decade earlier, but rising fully 94% of the time that the FTSE fell from 5 years before.
Bottom line? If gold offers a reliable safe haven from falling share prices, it works across longer periods – just the kind of prolonged losses which a sensible investor might want to avoid – and it has worked almost without fail.
So when did gold fail? Summer 1990, summer 1992, and the start of 2016 for UK investors. (We'll update our US Dollar analysis and also add Euro-equivalent data soon.) Those failures were all short-lived, first because the FTSE soon recovered to show a 5-year gain, or because – 4 years ago – gold was starting a rally from multi-year lows.
With the odd set back, that start-2016 rally became a bull market became a run to new all-time record highs for UK investors, peaking above £1300 per ounce 3 times in the last 3 weeks. 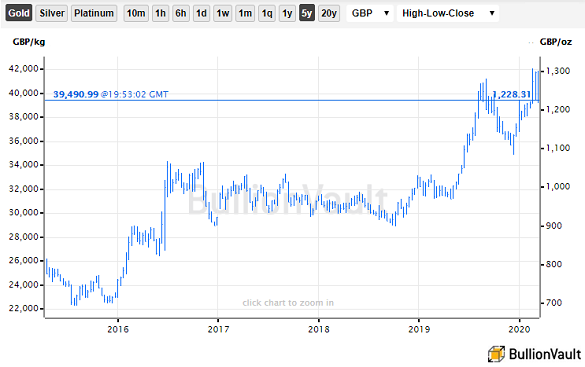 Is gold's bull market finished? Who knows? But just like the 9/11 terror attacks didn't spur gold's long bull market of 2000-2011, gold was already gaining long before today's virus crisis took hold.
Most notably, demand to invest in gold began rising sharply last summer, when forecasts of global growth turned lower, hitting the outlook for corporate earnings and sending long-term interest rates sharply lower.
And from here – with or without continued panic in the stock markets next week – the factors already driving gold prices higher look set only to grow stronger as governments throw money at a global economy already weakening, and central-banks slash rates and print money to try and keep 2020's fresh record debt pile from collapsing and crushing all financial assets.
So if history rhymes and repeats from here to 2025, ask yourself:
Will the stock market trade higher 5 years from this crash? Can you really hope to know? Or will spreading your risk, and adding a small allocation to gold, help cut your need to guess right?