END_OF_DOCUMENT_TOKEN_TO_BE_REPLACED

Fear of missing out sees the real ghouls pour back in...
COMMON THINKING says 'Gold only loves bad news', writes Adrian Ash at BullionVault.
Looking at the first 7 dreadful months of 2020, you might think the metal deserves that ghoulish tag.
Gold priced in US Dollars has now only traded higher than today on 3 days in history, all of them at the summer 2011 peak. To get here, it has risen $400 per ounce from March's Covid Crash, marking its steepest 18-week gain since the very tops of September 2011 and before that January 1980.
The zombie metal's slack-jawed cousin has started cackling too.
Silver prices have leapt by one-fifth this week alone...reaching sudden 7-year highs after hitting the cheapest since 2009 only 4 months ago.
Now up nearly 90% since then, silver's US Dollar price has added $10.65 per ounce since mid-March. Like gold, that also marks its fastest acceleration ever outside the 1980 and 2011 peaks.
Look, bullion prices don't typically jump because of a surge in the death rate, social unrest, geopolitical strife or wanton incompetence from elected officials. But if those stresses add to a financial crisis or economic slump, then gold prices can spiral higher.
Throw in a little war-war jaw-jaw...with Trump's Secretary of State Mike Pompeo today calling on the United States' allies to join him in rattling swords at China...and who knows how high this spike might stab?
Again, both the dramatic gold spike of January 1980 and then the next record gold price of summer 2011 prove the value of violence to metals which most usually just don't care.

The first top came on 21 January 1980 at $850 for London benchmark prices...
...up 180% in 6 months as a decade of double-digit inflation climaxed with the Soviet invasion of Afghanistan and the US Embassy hostage crisis in Iran.
The second peak of 6 September 2011 at $1895...or more famously $1920 in spot trade...came as the global financial crisis climaxed with US government debt being downgraded, the Greek debt crisis threatening the end of Euro monetary union, plus the worst rioting across England in more than two centuries.
Both times the violence of those gains subsided on the retreat. You got more time to get out after the peak than you got to get in.
Gold's wholesale bullion price took until December 1981 to break decisively below the $400 level it had reached in the surge of late 1979.
Three decades later it took until April 2013 to fall through the $1500 floor built and tested just 1 month before the $400 surge of summer 2011.
Nine years later, gold has already set fresh all-time highs in every currency except the US Dollar in the first half of 2020. It has already begun to rise back in summer 2019...long before Covid began claiming lives the world over.
Bad things were already happening in the economy and debt markets too.
That's why Australia's construction sector shrank for the 22nd month in a row this June...
...and Japan's manufacturing has now shrunk in all but 2 of the last 18 months...
...while Eurozone manufacturing activity has now been shrinking unbroken since the start of last year.
Maybe this underlying slump stems from politics, with China's 21st Century boom now whacking its formerly happy suppliers as they baulk at the Beijing dictatorship's violence at home and threats abroad.
Then there's monetary policy. Yes, central banks have gone utterly crazy since the virus hit. But the European Central Bank was already throwing cash at lower-rated debt markets, starting way back in 2014 as this new research paper from the Frankfurt money factory points out.
The paper says targeted longer-term refinancing operations (aka the catchy name of TLTROs) were a good thing...enabling commercial banks across the 19-nation currency union to raise loans from the central bank using lower-rated corporate bonds as collateral.
But even if that benefit were an unalloyed good, why were these loans against junk necessary? What dreadful risk or failure do they seek to mask?
Back in gold, this latest swing towards 2011's top in US Dollar terms near $1900 per ounce is finally attracting media attention outside the usual gold-watchers at Reuters, Bloomberg and MarketWatch.
That's because FOMO is driving a flood of speculative money into gold, piling on top of January-June's record physical investment demand. And while this surge in Comex gold futures contracts and especially silver options betting enables active traders already owning the actual metals to take a quick profit ( BullionVault users as a group have been net sellers over the last 2 days) it's giving gold and silver the kind of acceleration they need to catch the eye of the wider world. 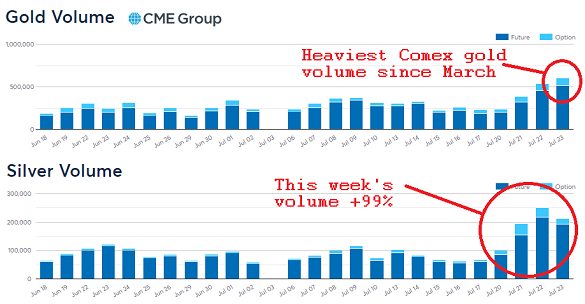 So far however, no Sunday magazines splashing glossy pics of vaults or cargo planes carrying gold...
...and no afternoon chatshow hosts touching our knee and asking why gold is so stable at the very highest prices in history.
Where the 1980 and 2011 tops both came after a decade-long bull market, summer 2020 comes only 12 months after gold turned decisively higher, and barely 2 years after it flirted with the crash lows of a half-decade before.
So will $1900 or even $1920 prove the top this time again? Maybe, and very possibly in the short term. While the underlying trend looks strong, silver in particular might struggle not to stumble on the other side of this jump...now gaining 20% inside 5 trading days and rising over 27% since we wrote this tip just at the end of June.
(Anyone thinking they need leverage on the devil's metal probably needs instead to take a breath, if not a Valium. Oh, and anyone buying silver coins or bars to polish at home needs a long lie-down in a darkened room, too.)
While everyone is suddenly watching the price of gold in US Dollars surge towards its 2011 peak, gold has already set fresh all-time highs in every other currency this year, and the UK gold price in Pounds per ounce has made a fresh record today, breaking through £1460 as Sterling slides yet again on the currency market.
Beyond the current jump in speculative trading and profit taking, the case for owning a little physical bullion looks set to grow stronger as 2021 approaches. Rising inflation expectations, driven by unprecedented peacetime deficit spending and central-bank stimulus, make rare, uninflatable gold or silver an appealing alternative to cash or credit investments that are certain to return a loss in real terms.
Fears of widespread bankruptcies and debt defaults also contrast with precious metals, because physical bullion cannot go bust or miss a payment (it never makes any). Like real estate, gold doesn't rely on anyone else's solvency to retain value, but it also trades in a deep global market (only just behind short-term US Treasury bonds or the US stock market’s S&P500 index in daily volume)
For our own ghoulishness meantime, this surge in gold and silver prices is keeping the world's No.1 market for physical precious metals very busy.
Globally the 6-month count of new first-time BullionVault users more than tripled in the first half of 2020 from the average pace of the last 5 years. Most notably, and with deposit rates at the European Central Bank now 0.5% below zero – and negative rates now impacting deposit accounts for corporate and retail savers – a record number of Eurozone residents began buying precious metals for the first time between January and June.
Trading volumes on BullionVault – launched in 2005 – have meantime surged, reaching $28.9m across gold, silver and platinum on Wednesday alone and making it our 3rd busiest day ever after 17 March 2020 (when the Covid Crisis really broke) and 24 June 2016 (day of the UK's Brexit referendum result).
Have you missed out so far? For private investors it can feel hard to buy an asset which has already risen so sharply, but bank and bullion analysts are now bullish across the board...
...favouring real assets over the fast widening disconnect between financial markets and the economic reality...
...and consensus for the second-half of 2020 says gold will continue to break higher and set a run of fresh all-time records even against the almighty Dollar.
Warning: Such consensus should make us all nervous. First because when everyone thinks the same thing, there's a risk no one is really thinking at all. Second because I, for one, don't actually want to live in a world of $2,000 gold...never mind $3,000 or $5,000 per ounce.
But nor did I want any family to die from this dreadful virus however...
...or my friends' businesses and jobs to be destroyed by the blanket lockdowns imposed in the name of saving them...
...let alone see my kids and their friends locked out of school, sports, exams, hanging out, growing up.
Stuff happens. Ugly stuff we can't avoid by wishing it away.
If people buy gold as insurance, then being called 'ghoulish' should be the least of our worries. And if hedge funds and other hot-money traders keep spiking the price of silver as well, we might at least get some excitement to detract from the sadness and anger.
Like gold, silver enjoyed record price spikes in late 1979 and early 2011. Both saw silver prices more than double in a matter of months, and both topped out at $50 per ounce (in nominal dollars).
What those surges also had, and what silver has lacked over the last decade, is a new and compelling narrative. A return to some kind of metal-backed currency system was widely discussed as the 1970s' long inflationary crisis peaked. Silver's crucial role in photo-voltaic cells then gained mass coverage in late 2010, led by Beijing's plans to cover China with solar panels as part of its post-financial crisis stimulus.
Here in 2020, governments everywhere are hoping new infrastructure spending could accelerate their national recovery. Leading those plans (and again following China's example) is 5G technology, where the massive rollout of base stations, additional data storage and new 5G-enabled devices is certain to boost the electrical and electronics sectors' demand for silver.
Bottom line? Silver tends to act like gold on steroids, if not crack, and the number of private individuals seeking stability and diversification with precious metals has meantime never been greater.
Gold's timeless use as the ultimate store of value shines out amid 2020's rolling crises. Today's unprecedented central-bank and government stimulus put a spotlight on silver's stronger industrial use and its potential as a high-octane inflation play.
Small cheer, I know, against the things that really matter. But losing money on top of losing loved ones won't help us look after those we still have.