END_OF_DOCUMENT_TOKEN_TO_BE_REPLACED

Investors spent $113m more than they needed buying silver in 2014...
BUYING SILVER makes sense for lots of reasons that lots of analysts don't get, writes Adrian Ash at Bullionvault.
If you see the appeal, there are smart ways to buy, and less wise choices ways.
One popular route, enjoying record demand for the second year running, cost investors at least $113 million more than they need spend in 2014.
By early December, demand for buying silver Eagle coins made by the US Mint already hit an annual record.
More than 42.8 million Silver Eagles were produced and sold by the Mint year-to-date. That tops even 2013's full-year record.
Silver ETF trust fund holdings have meantime held firm near record levels. Bullionvault users have also been buying silver in 2014, adding some 1.7 million ounces to the metal they own in secure London, Zurich, Singapore and Toronto vaults as well.
Coming against the continued drop in silver prices however, some analysts think such robust investor demand is crazy. Because a small group of what the finance industry calls "retail investors" have kept pouring money into silver as it kept falling...all the way down from $49.50 per ounce in 2011 to just $14.40 in the wholesale 'spot' market at early December's new, sudden and brief five-year low.
"Will these people never learn?" you might ask.
But the value case for silver today – the fact it looks historically cheap in terms of gold, in terms of fiat Dollars, and simply as a hard asset used as money since the dawn of civilization – is only one part of the story as 2015 begins.
Growing technologies are now replacing the demand lost from photographic film since digital cameras and then smart phones began to take over at the turn of this century. On top of existing industrial silver uses, like in chemicals production, new technologies also find silver to be the truly "indispensable metal", from solar energy to silver in flexible touch-screens to RFID tags for tracking packages shipped worldwide.
Being a noble metal, silver doesn't rust or corrode. The most conductive of all materials for electricity, silver is the most reflective metal, and has the highest thermal conductivity too. And because bacteria can't grow on it, pure silver has long been used to line bottles and jugs to keep water, wine and milk fresh. Now its commonly used to fight mold, mildew and infections in timber treatments, sportswear, mens socks, hospital linen and wound dressings.
Global economic growth can thus build a solid case for silver's long-term value. But shorter-term, and for more active traders and investors, silver's price volatility also appeals today, especially starting down here near those 5-year lows. Because when silver moves, as December 2014's huge 19% rally proved, it really moves. 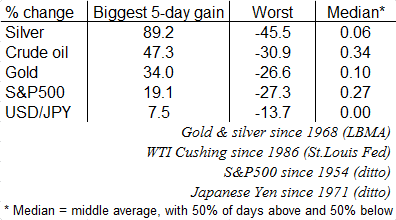 Private investors buying silver down here clearly think they've grabbed a bargain. But if they hope to sell a big spike, or plan to hold for a longer-term revaluation by the market, then 2014's record-high sales of Eagle coins from the US Mint are odd.
Because those investors gave away a huge chunk of their potential profits. An easy $113 million or more, in fact.
Individuals cannot buy straight from the Mint. The best-priced US retail price, offered by an approved distributor today, costs you $2.80 per ounce over and above wholesale spot prices.
Checking live quotes on BullionVault in contrast, private investors would have paid barely 20 cents per ounce over spot – commission included – at current prices. So they could have easily saved $113 million on 2014's year-to-date sales, way up at 42.8 million ounces.
Yes, using Bullionvault, you must then pay storage and insurance. Because it removes the hassle of trying to care for coins (or small bars) at home. It also enables you to sell the very moment you wish, with instant settlement of payment in full, rather than trying to negotiate or shop around different coin dealers' quotes when the time comes.
On the buying-cost savings alone meantime, the typical Bullionvault user would save so much money acquiring 500 ounces of silver, he or she would then enjoy more than 14 years of free storage.
So, whether or not today's "silver stackers" are crazy as some analysts think, they're surely mad to buy so much silver in the form of high-cost coins.
And that is without even touching on the issue of VAT sales tax...costing up to 20% extra...which UK and other European investors face when buying physical metal outside Good Delivery silver bars and storage.
That, to my mind, really is the definition of crazy.
Sane investors can side-step all these costs. Use Bullionvault to  buy silver directly at the lowest possible charges.