END_OF_DOCUMENT_TOKEN_TO_BE_REPLACED

"THE GOLD MARKET has gone nuts," said a dealer to me today. Anyone looking to Buy Gold Today might think the same.

Surging by more than 25% in the last 12 weeks alone, the Dollar Gold Price has now traded above $800 per ounce for three sessions. 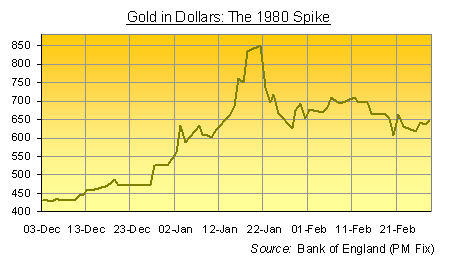 The famous peak of $850 per ounce – recorded at the Afternoon Fix in London on 21st Jan. 1980 – marked the end of a nine-year bull market in gold, unleashed when Richard Nixon cut the US Dollar free from its "golden fetters" and stopped paying foreign governments in bullion.

Nixon killed what little life was left in the Bretton Woods agreement, built amid the devastation of World War II to help Europe recover its faith in credit and currencies. The result?

"Inflation in most countries at the end of 1979 was running in double digits," writes Peter Bernstein in his classic The Power of Gold. Pointing to the OPEC-led spike in oil prices, he also notes that "political conditions were perhaps even more frightening.

"Iranian radicals in Nov. 1979 took over the US embassy in Tehran...At the same time, the Russians were building up their strength in southern Yemen near Saudi Arabia, near Afghanistan's border with Iran, and near Bulgaria's border with Yugoslavia."

Fast forward to Nov. 2007, and the US is now rattling sabers with Iran once again, even running a naval exercise this week in the Persian Gulf. The Straits of Hormuz – the world's busiest shipping lane for crude oil tankers – were last week threatened by Iranian general Ali Fahdavi. He also said that Iranian suicide teams stand ready to attack any target in the Gulf.

Russia is also harking back to the flared-trouser glory of its Communist past, flying jets near to NATO airspace, murdering dissidents in London, and using its oil & natural gas resources as a kosh to beat its smaller neighbors.

"There are those who would like to build a unipolar world," said President Putin at Sunday's Unity Day rally in Moscow. "They would themselves like to rule all of humanity."

Putin then laid a wreathe in Red Square to commemorate those soldiers who had built Russia into "a great power stretching from the Baltic Sea to the Pacific."

Ignore the never-ending war in Iraq and Afghanistan for a moment, and move straight onto the oil markets, where prices above $90 per barrel are only a few cents off beating 1980's top if you account for inflation. And then there's the credit market, struggling beneath a mountain of bad debts while interest rates fall...cutting the value of money every time it drops in price.

In other words, the panicked reaction of central bankers to the ongoing credit crisis makes Buying Gold attractive even before you consider the fundamentals of the Gold Market itself.

When gold last traded above $800 per ounce, Paul Volcker at the Federal Reserve fixed the Dollar by hiking US interest rates to nearly 20%.

For a full report on What's Really Driving this Gold Bull Market – plus a gram of Free Gold stored in Zurich, Switzerland – click through and Register with BullionVault here...