END_OF_DOCUMENT_TOKEN_TO_BE_REPLACED

WHY DIDN'T anyone see it coming? asks Adrian Ash at BullionVault.

That was the Queen's famous question, 14 months into this now 5-year old crisis, when she visited the London School of Economics.

Well, replied Professor Luis Garicano, showing Her Majesty the LSE's new £71 million ($140m) faculty building in November 2008, "At every stage, someone was relying on somebody else and everyone thought they were doing the right thing."

Hnh? The British press guffawed and harrumphed at this lame excuse for an answer. But given a few days – and then a few months, and then a few years – the economics profession got its full reply down pat.

"The simple response is that many people did see it coming."
- Prof.Garicano, defending himself in The Guardian a week later

"Many people did foresee the crisis...but nobody wanted to believe [it]."
- Open letter to the Queen, summarizing a Royal Academy seminar of experts, July 2009

"The answer is extremely simple: no-one believed it could happen."
- Mervyn King, governor of the Bank of England, BBC Today lecture, July 2012 (no doubt reprising his own 2009 audience with Her Majesty)

So many people, such simplicity! But oh, so much disbelief too!

Contrary to what celebrity-economists would have you think, most people did in fact see the crash coming. Ask anyone you know. I promise they'll say they knew what was coming. It's just that, well, they didn't do anything about it. It wouldn't have been a crash if they had. Because they would have got out of the way, or – if they had any say in the matter – they would have done something (raising interest rates, trading more cautiously, reining back lending standards) to stall the bubble long in advance.

But contrary to the professionals again, a few people most definitely did believe it would happen. What else do you think drove the 150% rise in gold and Silver Investing prices in the half-decade before Northern Rock blew up? Reviewing global finance in the August 2007 edition of his Gloom, Boom & Doom newsletter, Marc Faber – a long-time advocate of Buying Gold – listed 13 clear warnings of trouble ahead, starting with the 2001-2006 period. "Ultra-expansionary US monetary policies," wrote Faber of Alan Greenspan's response to the Tech Stock Bust, "with artificially low interest rates lead to bubbles all over the world and in every imaginable asset class.

"First Warning: The price of gold more than doubles..." 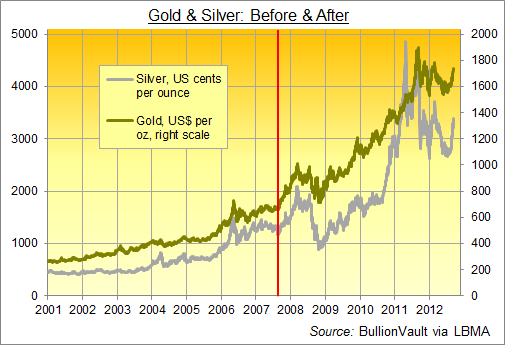 That red line marks the credit crunch of 9 August 2007, which all too rapidly for the all-knowing disbelievers became the Northern Rock bank run of 14 September. Over the preceding half-decade gold and silver had doubled in price. Over the following 5 years, they've both gone on to triple again.

So being early was smart – or lucky...or just doom-n-gloomy...depending on whether or not you got in. But buying even as the crisis broke has seen gold and Silver Investing deliver as expected, albeit with ugly swings in the meantime just to keep new buyers on their toes.

"I realised early in 2007 that the economy was going south," writes John, a BullionVault user since September 2007. "I had an endowment that was going sour, so I cashed it in and bought my gold."

Phillip, who also began Buying Gold when Northern Rock hit the headlines – 5 years ago this Thursday – says that "The high level of personal and public debt had concerned me since 2004, and I realised that there was only one solution: money printing and currency devaluation. But it was only in 2007 that I found BullionVault and saw how simple it could be to own gold."

"Given what's happened in the last 5 years," adds Armand, a British user of BullionVault since September 2007 who now lives in Spain, "I'm surprised more individual investors haven't bought bullion as a direct result of the crisis.

"I'm not a doomer, it's a question of confidence. To me, owning gold and silver is the only option in a financial environment heading for collapse in one of two ways: rapid, unexpected hyperinflation, or a long, drawn-out decline."

Now, that kind of gloom might sound all too common today. The data are hardly improving as Europe tiptoes around an abyss of its own making, the US and UK struggle to add jobs or growth or both, and China starts apeing post-bubble Japan circa 1990. Closer to home, newspapers and their comments section are after all full of savers moaning about zero interest rates, politicians panicking over money-printing, and economists and investment strategists fretting about hyperinflation. Buying Gold or silver is hardly a smart, little-trod path today.

But look again at the first 5 years of this financial crisis. How many of the new know-it-alls – who now say they saw it coming – have actually done something about it, and chosen to Buy Gold or silver? The best-performing asset class by a country mile since 2007, precious metals might be edging into the presidential debate. But amongst investors and savers, they remain very much a minority sport. No doubt because, quite simply, no one really foresees the crisis continuing. And amongst those who do, no one believes it. Not enough to take action.

"We have learned that in most situations central banks are more than capable of controlling inflation on their own. Markets [today] show no sign of a fear of looming high inflation."

Looking to start Buying Gold or physical Silver Bullion at the lowest costs with the utmost security...?