END_OF_DOCUMENT_TOKEN_TO_BE_REPLACED

This doesn't compute. Not against recent history or received wisdom.
"The traditional argument is rising yields are bad for gold," as strategist Aasif Hirani of Tradebulls Group in Ahmedabad, India, writes in the Economic Times.
"There is a negative relationship between gold and interest rates."
More specifically, "The true driver for gold is real interest rates," as the aptly named Maxwell Gold says at trust-fund provider ETF Securities. He points to the stronger inverse relationship between gold prices and bond yields adjusted by the rate of inflation.
"Changes in real yields," agreed a portfolio manager at asset-management giant Pimco back in 2014, stating the growing consensus, "can explain the majority of changes in gold prices over the past several years."
Even ahead of this week's US inflation shock to bond yields however, "Gold has completely dislocated from its negative correlation to real interest rates," said analysts at Swiss bank and wholesale bullion market-maker UBS in late January.
"We believe this dislocation is more a temporary phenomenon than a change in regime. [We expect] re-establishment of the historical negative correlation between US real rates and gold."
But is this historical link now historic? It certainly reached historic levels as 2017 ended.
Did that mark one last hurrah for a relationship ever-more analysts had noted and which ever-more traders were clearly playing? 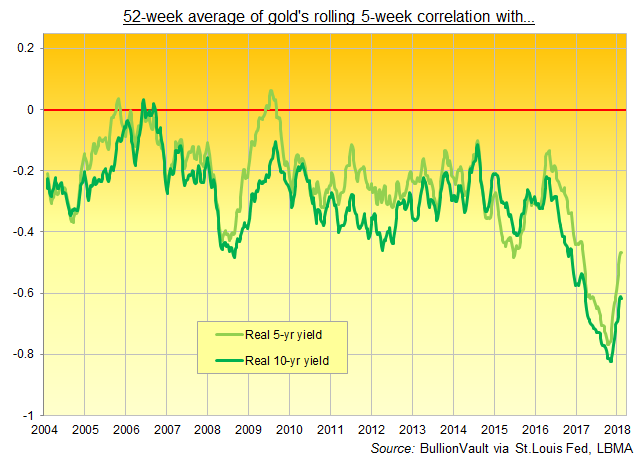 The way things used to work (and might do again soon) made sense for gold versus bond yields immediately, mechanically and financially.
But not here in early 2018. The pattern right now is gold prices rising even as bond yields rise, both in nominal and inflation-adjusted terms.
What gives?
Statisticians track how closely two things move together by working out their correlation. Run over a period of time, this figure stands at +1.0 if they move exactly in lockstep together. Or it reads -1.0 if they move exactly opposite, with one rising to mirror a fall in the other.
No, correlation doesn't prove causation. But it sure doesn't deny it, either. And checking gold prices against shorter-term US bond yields, the metal has consistently shown an inverse relationship with interest rates.
On a 12-month basis, gold's correlation with 2-year Treasury yields has been negative 59% of the time over the last 40 years. It gave a negative reading in 85% of all months between 2008 and 2018.
January this year, in contrast, ended with gold's strongest positive 12-month correlation against 2-year US Treasury yields since late 2006, back before the subprime slowdown slipped into a crash and then a crisis.
Adjust those rates for inflation, and this 2018 switch becomes more stark again. The co-movement with gold prices of 2-year Treasury bond yields minus the annual pace of CPI inflation hasn't been this strong since late 2010. Only 16 months out of the previous 180 showed a stronger positive correlation between gold prices and real 2-year yields.
Further out, the same picture, only more so. Already by late January, gold was showing its strongest positive weekly correlation with real 10-year bond yields (this time adjusted by the market's own 'breakeven' 10-year inflation outlook) since gold's first post-crash rally of late-summer 2013. It has only been stronger 8 times in the 784 weeks since these 10-over-10 data begin from 2003.
So is that it? Has gold snapped its negative connection with the cost of borrowing?
Three possibilities stand out among many others...
Personally I'd say option No.3 looks most likely. But that's just prejudice based on investing in and studying gold since the 21st Century got started.
Historically, the other two interpretations also look a fair guess right now. And the surging stock market just throws another curve-ball at analysts trying to figure out what's moving gold higher. Because typically, gold tends to do well when equities fall, making it a valuable tool for investors wanting to diversify stockmarket risk.
Here again however, there is precedent. And again, like the last time gold's co-movement with real bond yields was this strongly positive, it also comes back before the global financial crisis broke a little over a decade ago.

See how, from mid-2003 to early-2006, the price of gold (yellow) rose alongside the US stockmarket (blue), the rate of inflation (red), and the yield offered by shorter-term US bonds (green)?
Any "typically" negative relationship didn't apply. All four went up together for the best part of 3 years running...a goldilocks period of rising asset prices, better returns to cash, and stronger pricing power for US corporations.
Gold and the stockmarket then pushed higher still as inflation flattened and fell, gaining even as real interest rates rose thanks to 2-year bond yields holding firm. But if the too-good-to-be-true gains of 2003-2006 weren't warning enough, this apparent surprise really said that something ugly was afoot. It came just before that fat gray bar marking the sharpest US recession since the Great Depression.
Gold prices then kept rising during that global financial crisis. Equity prices, in contrast, took almost 5 years to get back to what had been, at the 2007 peak, a series of new all-time record highs.
That's all just history today of course, even if it does feel weirdly familiar right now. And one other possibility might explain this upmove in gold, but this time with no precedent in modern history.
Because maybe, just maybe, the sell-off in bonds doesn't reflect fears of inflation so much as fears of US government debt in itself.
US federal debt today totals over $20 trillion. More than half of that debt has been added in just the last 10 years. Another $10 trillion of debt by 2027 was forecast when Donald Trump took over the White House in January 2017. His latest budget plan could extend that 10-year growth by a further $7 trillion on top.
If the world ever does get sick of lending ever more money to the United States' Treasury, the price of Treasury bonds will sink by defintion. In that outcome, it's hard to imagine the price of gold failing to rise sharply. Because the metal is, after all, "the ultimate insurance policy" to quote former Fed bubble-blower Alan Greenspan.
And for savers and investors everywhere, a collapse in US Treasury debt, together with the disaster it would mean for the Dollar, would mark a truly historic crisis.