END_OF_DOCUMENT_TOKEN_TO_BE_REPLACED

Higher interest rates & rising equities must mean gold prices fall. Right...?
GOLD was a universal "sell" for professional analysts at New Year, writes Adrian Ash at BullionVault.
Losing 30% in 2013, the gold price faced the long-awaited start of US Fed tapering – widely supposed to make fixed-income bonds go down, nudging interest rates higher – plus strong hopes for further gains in world equities. Who needed the barbarous relic?
Half-way through 2014 however, the gold price has since rallied, recovering one-third of 2013's near-record losses and beating all other major asset classes so far. Why? The market, reckons Nic Brown, head of commodities research at French investment and bullion bank Natixis, "is taking the view that the Fed is behind the curve and may be allowing inflation pressures to creep into the system." But most other analysts still forecast fresh losses for gold prices in the back-half of 2014, and they still point to US Fed policy and the rising stock market as your No.1 reasons to sell.
ABN Amro's commodity analysts put it plainly last week. They expect gold's 11% rise in the first-half of 2014 to be "temporary" because US Fed rates hikes are coming, while the outlook is "positive" for equities. Such thinking makes sense based on 2013's example. Taper talk pushed bond prices down last year, nudging market interest rates higher. The S&P500 meanwhile returned 32%, a little more than gold prices fell.
Logic might also see a trade-off between gold and rising returns on other assets. Because the metal yields nothing and does nothing. It can't even rust. Equities and interest-paying investments on the other hand work to increase your money. So gold prices should fall when equities rise, and also when the markets expect higher interest rates. Or so analysts now think.
Consensus and logic are only half-wrong. Almost exactly half wrong in fact. Since 1969 gold prices and US Fed interest rates have moved in opposite directions 47% of the time (rolling 12-month periods). That proportion rises to 54% if you adjust both gold and Fed rates for inflation. But this relationship remains far from strong enough to make certain forecasts. As for equities, gold also moves in the opposite direction to the US stock market just less than half of the time, some 48% of all 12-month periods since 1969.
What's more, the rolling 12-month correlation of gold prices with the S&P 500 over the last 45 years averages zero. The mean is -0.002, the median 0.02 – as near a perfect non-correlation as equity investors wanting to diversify their holdings could wish for. 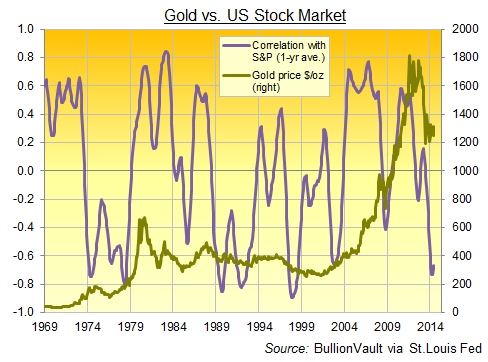 To achieve that long-term zero, gold prices in fact swing from a strongly positive to strongly negative correlation with the US stock market, as the chart shows. The 15 months to July 2014 were the longest run of negative correlation in 11 years, suggesting a period of co-movement is now due.
Yet with both gold and equities rising in June, several analysts called it an "unusual combination", one which "does not normally last long." During gold's long bull market starting 2001 however, it rose when stocks fell, and rose again when they gained. So once again, the statistics beg to differ.
So much for the data. Gold bullion is often cast as a "narrative asset" – an investment choice built on stories and sentiment because it lacks a yield on which to base any value analysis. So let's assume that both equity prices and rate expectations do rise in the second-half of 2014. How might that story run for gold? The most recent period when Fed rates rose with equities should give gold bears pause. 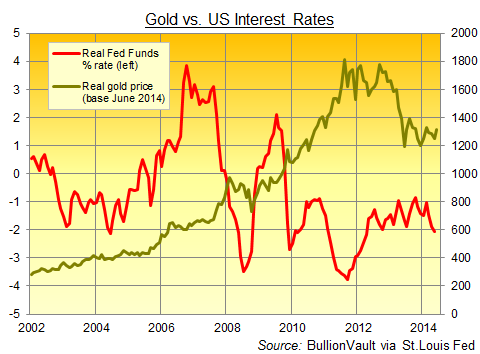 From spring 2004 to summer 2006, and starting from what were then all-time low "emergency rates" of 1.0%, the Fed raised its key interest rate 17 times in "baby step" increments of 25 basis points. The S&P 500 gained 13%, but gold priced in Dollars rose nearly 60%, gaining 48% when adjusted for the change in US consumer prices. All this while the real Fed Funds rate, also accounting for inflation, rose three percentage points to turn positive for the first time since mid-2002.
One explanation is that the big money which drives gold higher or lower doesn't tend to make decisions based on overnight rates. Instead, it looks at longer-term yields, most notably 10-year US Treasuries. Fed chairman a decade ago, Alan Greenspan noted how his central bank's tightening cycle hit a "conundrum" in the bond market, because longer-term yields failed to rise in tandem. Indeed, real 10-year yields actually fell between mid-2004 and mid-2006, briefly turning negative for the first time since 1980.
Here in 2014, bond yields have again ticked lower so far, despite the Fed's quasi-tightening of tapering its quantitative easing asset purchases. Both gold and equities have risen with bond prices. Short-term rates will meantime start the next hiking cycle from new record lows, and the current "emergency rate" has also been applied far longer than Greenspan's 1.0% low – a full six years by end-2014, against just 12 months for the Maestro's tech-crash reflation.
You won't need reminding how the US economy reacted to "normalization" a decade ago. Given 0% money and QE since 2009, can it really bear a return to positive real rates next year? The gold market says not.