END_OF_DOCUMENT_TOKEN_TO_BE_REPLACED

Nor 100% about the Dollar. Just in time for Goldman Sachs to catch on...
NICE to see Goldman Sachs spotting what matters 3 months late, writes Adrian Ash at BullionVault.
"It is tempting to blame the rally in gold prices on recent events in North Korea," says a note from the US investment bank's commodities team under Jeffrey Currie.
"But...real rates and the US Dollar...explain 85% of the price movement."
Real rates here mean the yield offered on US government bonds after you account for the pace of inflation. The US Dollar means the greenback's value against what Goldman calls "a basket" of emerging-market currencies.
But forget that 85% for now. Because even before Pyongyang began lobbing out missile tests...and back before it was only threatening to tweak Donald Trump's nose in early August...gold had already moved to a new record-close relationship with the yield offered by US bonds, adjusted for inflation.
Or rather, a record-strong inverse relationship.
Typically moving in the opposite direction, the price of gold was never more about real interest rates than it was over the month to mid-June.
Since then however, the relationship has weakened – albeit a little – just in time for Goldmans to catch on.

Still, like Goldman almost says, the gold price's latest action continues to oppose the direction of real US bond yields like (pretty much) never before.
Our chart above shows the rolling 1-month average of the rolling 1-month correlation. It would read +1.0 if gold prices and inflation-adjusted bond yields moved together in perfect lockstep. It would read -1.0 if they moved perfectly opposite to each other.
And on the 8th of the 8th their 1-month correlation reached -0.92, a new all-time low on the available 15 years of data, before edging back to -0.70 as Kim's bombs splashed into the Pacific at the end of August.
Weekly data meantime show that, on a rolling 5-week basis, the correlation of gold prices with real inflation-adjusted US bond yields has not risen above zero for more than 12 months – the longest-ever stretch since 2002 – averaging a record -0.77 over that period.
Last week the 5-week correlation fell below -0.90 as gold prices jumped and inflation-adjusted US interest rates fell, both reaching levels last seen before Donald Trump won the US presidential election last November.
"I doubt very much that North Korea is going to back down," says David Govett at brokers Marex Spectron in London, "and I also doubt that Trump will keep quiet.
"[But] the Fed are also helping gold's cause by talking down interest rate rises and keeping the Dollar weak."
Conclusion? "All in all," says Marex, "this market is 100% governed by news and the Dollar."
You might wonder what else there is. Besides, of course, the all-important direction of real US interest rates. But the Dollar really does count for the gold price. Albeit slightly less than the all-time record connection hit in the middle of last month. 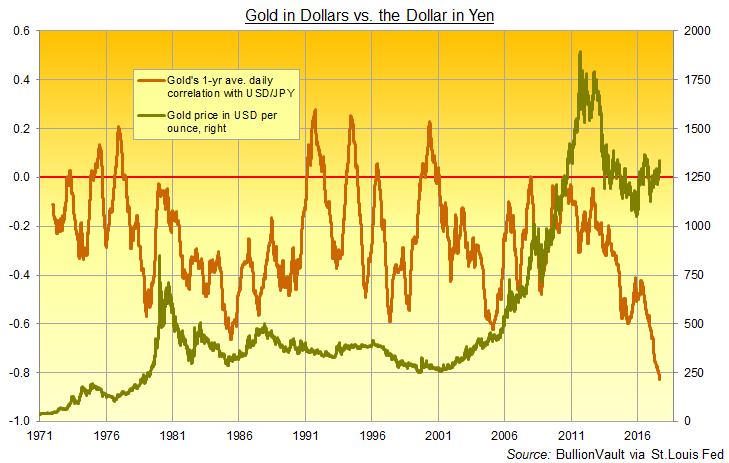 Here again, gold's relationship with a key US variable hit a fresh all-time record earlier this year. Again, it has moved away from it since then.
The daily correlation between gold priced in Dollars and the Dollar's value in Japanese Yen hit a record low of -0.99 this April. On a rolling 12-month average, it has moved ever-more negative since then, falling from -0.74 five months ago to touch -0.83 last week.
But this relationship – mirroring the Dollar's value against the Yen, currency of what used to be the world's 2nd largest economy and the largest economy with a four-decade history of freely floating exchange rates – has suddenly weakened.
Between 25 August and 6 September the 1-month correlation (daily basis) has risen from -0.93 to -0.51, touching its least negative level since start-March.
How come? Step forward prime suspect Kim Jong-un. Firing his missile test across Japan has capped the Yen even against the fast-falling Dollar. But from a negative correlation this strong – very nearly perfect this spring, and still stronger than the positive daily correlation of gold with silver prices – a retreat looks statistically likely, if only short term.
In short, gold was in summer 2017 pretty much entirely about the United States' Dollar and the real rate of interest offered by its debt, even as the headlines screamed about North Korea's nuclear tests and stand-off with Trump.
Note the past tense. Real rates and the Dollar will struggle to account for so much of the movement in gold prices from here. Something else will likely pick up the slack. Something perhaps like that nuclear stand-off between Pyongyang and Washington.