END_OF_DOCUMENT_TOKEN_TO_BE_REPLACED

'Zero sales' but flights into No.2 consumer nation -98%...
GOLD PRICES in No.2 consumer nation India have erased almost all of this spring's historic discount to London quotes, suggesting that even as the Covid-19 lockdown keeps households away from jewelry stores, local demand is outstripping supply thanks to the plunge in airfreight.
Besides denting legal imports – down 86% year-on-year in June – the collapse in international flights has also crushed so-called 'grey flows' of smuggled bullion according to local traders, analysts and dealers.
As London prices have risen 25% from March's Covid Crash lows – driven by record-heavy investment demand to reach 9-year highs in US Dollar terms above $1800 per ounce – India's domestic gold prices have trended higher relative to that global benchmark since setting an all-time monthly record discount of $64 per ounce in April.
India's gold price recovery contrasts with China – both the No.1 gold consumer and No.1 mining nation – where Shanghai today showed a $33 discount to London, the deepest since mid-May, after briefly climbing to zero in June.
India has next-to-no domestic gold mining. Like China, it bans the export of gold in bullion form, requiring value-added fabrication (which can then be taxed) and forcing domestic prices to drop when local demand weakens relative to supply, rather than allowing outflows onto the global market.
"Demand is very weak," says one wholesale dealer in Kolkata, "but dealers are still charging a premium due to lower imports and as smuggling has nearly stopped."
Last week's rise to a small premium was possibly the first since the Modi administration's shock demonetisation of larger banknotes in late 2016 according to Sudheesh Nambiath head of the India Gold Policy Center at the Indian Institute of Management Ahmedabad.
"Shortage of smuggled gold is reason cited," he tweeted, " hope I am misinformed." 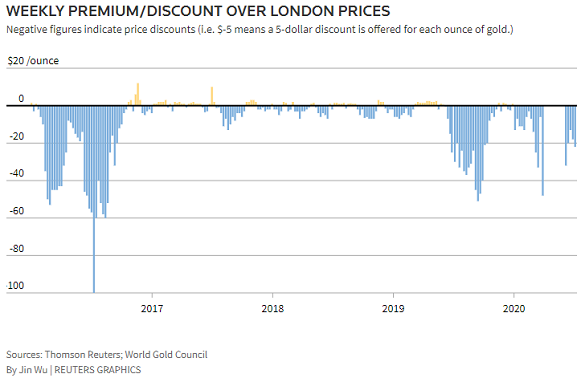 Data from Thomson Reuters suggest that, after accounting for India's 12.5% import duty on gold bullion and gold coins, domestic prices have offered an incentive to legal shipments in only 3 of the last 52 weeks.
Thursday saw spot gold on the MCX exchange slip back to a $3 per ounce discount to London quotes after accounting for India's 12.5% import duty.
Gold smuggling into India leapt in 2012 when the then-Congress Party Government hiked import duty on bullion bars from 5% to 10%, followed by a series of restrictions including the 80:20 rule, which effectively shut legal inflows the next summer and wasn't abandoned until November 2014.
Today's higher rate "creates an immediate cushion" for criminal gangs, says one un-named jeweler in Dubai, because "even if the smuggled gold is sold at a 6% margin, it's still a windfall."
With nearly 600km of shoreline on the Arabian Sea, the south-western state of Kerala last week sacked a senior civil servant over links with a gang caught smuggling gold through diplomatic baggage in the name of staff at the United Arab Emirates' consulate in the region's capital city Thiruvananthapuram.
Police say the gang smuggled 29 kilograms of gold in June alone, adding to the 130kg already smuggled since September last year.
"The UAE authorities have also launched a simultaneous investigation into the matter at their end," says Gulf News, "thereby putting a squeeze on all activities to move gold from here to India."
More broadly however, and with the number of international air passengers sinking by 98.5% in April-May from a year earlier according to the Airports Authority of India (AAI), "smuggling logistics were severely affected during lockdown" notes Reuters.
Trying to stem the spread of coronavirus among India's 1.3 billion citizens, the Government of Narendra Modi's BJP put the nation into lockdown on March 22, when all international passenger flights were banned and imported cargo "piled up unclaimed" at Mumbai's international airport.
Now with the third highest number of infections in the world, plus over 24,900 deaths from Covid-19, many states continue to restrict businesses from opening, "threatening the economic recovery" according to the Times of India.
" Sales are zero during the lockdown," says N.Anantha Padmanaban, chairman of the All India Gem and Jewellery Domestic Council. "We have never seen such kind of demand destruction happening,"
India's tentative re-opening also finds its gold industry in the middle of the sub-continent's typical summer lull, with few auspicious dates on the Hindu calendar until after the 'shradh' closed period of early September leads into the post-harvest season for weddings and culminates with the festival of Diwali, falling this year on 14 November.
Indian weddings – a key source of gold-gift demand – are typically lavish ceremonies held with hundreds of guests over several days, but can now have no more than 50 attendees, held in as short a time as possible, with no drink or food served or consumed unless vital to the ceremony.
While some big weddings have gone ahead regardless, breaching the rules and ending with police raids, others have been held at home with only a few guests, but the majority have been postponed, with October expected to see a spike.
Major retailers such as Titan have attempted to boost sales by offering incentives to online purchases, but digital sales start from a very low base in the metal's No.2 consumer market, accounting for just 1-2% by value in India according to a new report from the mining industry's World Gold Council.
"The gold industry in India needs to be fixed," says Joy Alukkas, chairman of the eponymous $2bn jewelry group.
"Too much of it is still in the unorganised sector, and I hope the exposure of the latest smuggling racket [in Kerala] will not be limited to a political drama."
India was this year ranked at 80th spot in the World Economic Forum's Corruption Perception Index, joint with China, Benin, Ghana and Morocco while Denmark and New Zealand took the top spot.
Venezuela, Syria and Somalia came in the bottom five.