END_OF_DOCUMENT_TOKEN_TO_BE_REPLACED

Gold ETF investing up 5-fold, jewelry halves, Germany now No.3...
GOLD DEMAND from investors in bullion-backed trust funds traded on the stock market has surged to record levels amid 2020's Covid Crisis according to new data, pushing up prices to new all-time highs as household consumption crashed.
Global figures from analysts GFMS Refinitiv show jewelry, industrial and retail investor demand for coins and small bars slumping by 29.3% in January to June compared to the first half of last year.
Within that household demand, Germany rose from No.4 to No.3 worldwide, overtaking the United States as coin and bar demand in the Eurozone's largest economy more than doubled from the January to June period of 2019.
Gold coins and bars accounted for over 96% of Germany's household demand in H1, an unprecedented figure for any top 10 gold-buying nation.
On a quarterly basis, jewelry fabrication volumes worldwide sank by 45.3% in the April to June period according to Refinitiv's data, reaching "the lowest level seen over the past two decades.
"All the key regions witnessed severe losses as demand was paralysed due to the virus outbreak and lockdowns in many markets."
Investment inflows through gold-backed ETFs in contrast rose 5-fold in the first half of 2020 according to separate data from competitors Metals Focus, published Thursday by the mining industry's World Gold Council.
Net-net, that still meant total visible demand shrank 8.9% year-on-year on Metals Focus' analysis for the WGC.
Wholesale bullion prices meantime averaged $1646 per ounce, the highest half-year level since H2 2012 and 26.0% above the January-June period of last year. 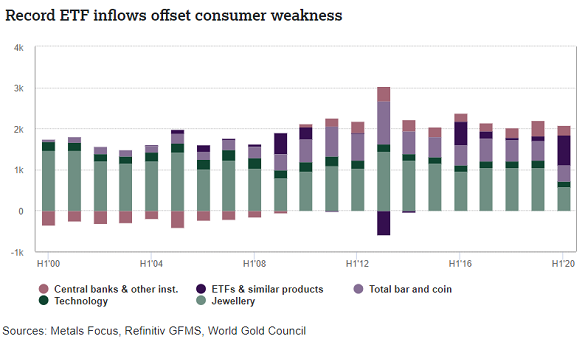 "The real story, and the reason we're seeing record-high gold prices, is because of what's happening in the investment market," said Andrew Naylor of the World Gold Council to CNBC today.
Three factors have driven the surge of ETF investing, says Naylor: a heightened fear of financial risk, unprecedented low to negative interest rates, and "price momentum [spurring] tactical positioning by institutional investors."
"Looking ahead," says Refinitiv's director of precious metals research Cameron Alexander, "the overall macroeconomic backdrop remains very supportive for gold.
"We believe that gold will continue its uptrend, driven by growing concerns over the global economic recession, fears of a second wave of Covid-19, heightened geopolitical tensions, historically low and negative interest rates, as well as rising inflationary expectation amidst unprecedented levels of stimulus measures launched by central banks around the globe."
Jewelry demand "was hammered by market lockdowns and gold prices reaching record highs in various currencies," says today's new Gold Demand Trends report from the WGC, with China – gold's No.1 mining, importing and consumer nation – "alone in witnessing a quarter-on-quarter recovery [in April to June] from extreme Q1 weakness."
Central-bank demand for gold also fell sharply in H1 2020 according to the WGC's new report, down 39.5% from the first half of 2019 to the smallest total since H2 2017.
"This is 6% below the 10-year H1 average," says the World Gold Council of net official sector purchases, still calling it "robust" but with "buying [now] more concentrated, with fewer banks adding to reserves so far in 2020."