END_OF_DOCUMENT_TOKEN_TO_BE_REPLACED

Turkey has announced some interesting policies towards gold recently. What are they up to...?

WHY ARE Turkey's policymakers suddenly so interested in Gold Bullion? asks Ben Traynor at BullionVault.

The move came only months after Turkey's banks initially received approval to hold some of their reserves as gold – and less than a week after reports that the Turkish government is hoping to encourage people to deposit more gold with the country's banking system.

What ever could they be up to?

One explanation is that Turkey satisfies most of its Gold Investment demand through imports. As BullionVault noted last month, Turkey has joined India and Vietnam in turning its attention to gold as a means of addressing a balance of payments problem.

But there is another, arguably more pressing problem to which policymakers view gold as the solution: Turkey's fragile banking system. The move to boost gold's role in the banking system should be viewed as part of a wider strategy to stave off a liquidity crisis – whereby banks have insufficient liquid reserves to meet their creditors' demands for repayment.

This is a potent fear in Turkey, which just over a decade ago suffered a liquidity crisis that scuppered efforts to rein in inflation and government deficits. Indeed, the Turkish Liquidity Crisis of 2000-1 is key to understanding recent policy announcements regarding gold. What began in late 1999 as an attempt to solve long-standing and deep-rooted problems ended with a banking crisis and exchange rate collapse.

"Our program rests on three pillars," wrote Turkey's economic minister and the governor of its central bank in their letter of intent to the IMF.

In other words – like many who have been compelled to throw themselves on the mercy of the IMF – Turkey's politicians pledged to sort out the public finances and put downwards pressure on wages, and therefore inflation.

Another way they would fight inflation by anchoring the exchange rate. The Turkish Lira was to be supported by what several economists have called a "quasi-currency board". Limits were imposed on how much liquidity the central bank could provide to banks – the idea being that if it prioritized the banking system's daily Lira liquidity needs it would weaken the currency.

A result of this arrangement, as one Turkish economist points out, was that the volume of liquidity in the system was "basically determined by the 'support of the international community' as well as the existence of 'good climate in other emerging markets'".

For a short while, the program seemed to work. Inflation fell, and capital inflows kept the Lira supported. In reality, though, Turkey was merely storing up problems for later. The current account deficit – the other side of the coin to those capital inflows – swelled from $0.9 billion in 1999 to nearly $10 billion by the end of 2000, according to IMF data.

At the same time, Turkey's banks were building up foreign currency liabilities that would later come back to bite them. One impact of the 2000 stabilization program was that it created an attractive opportunity for foreign investors. With the exchange rate now seemingly stabilized, market interest rates in Turkey more than compensated foreign investors for currency risk.

In addition, the stabilization program lowered the perceived default risk on Turkish government bonds. There was thus an attractive arbitrage, and investors – including Turkish banks as well as foreigners – piled in. Bond prices gained, and interest rates fell, as over $10 billion in net capital inflows washed into Turkey in the first nine months of 2000.

This speculative momentum, unsterilized by the central bank as part of the terms of the program, caused interest rates to 'undershoot', as foreign money flowed in and domestic banks funded bond positions with short-term borrowing. Then things went into reverse.

Capital inflow had already begun to slow down in the second half of 2000, and by September had turned into a net outflow. But it was November when things really started to fall apart. Under other circumstances, the central bank might have been able to sterilize the outflows by undertaking an expansionary stance, providing liquidity to offset the outflows. But under the stabilization program, this was not an option, lest it undermine the Lira.

With market liquidity scarce, interest rates rose. Banks that were funding their bond positions through short-term borrowing found their borrowing costs rose while the assets they held went down. Many were forced out of the trade with margin calls.

In addition, rising interest rates made it more expensive for the government to service its debt. This raised the risk of default, further weighing on government bond prices. And as money started to flow back out of Turkey, the pressure on the Turkish Lira caused investors to wonder if the central bank could support it. Eventually, on December 6 2000, the IMF had to step in with a further $7.5 billion.

However, Turkey was only allowed to use this money against a speculative attack should one occur. It could not use the money to support the Lira while lowering interest rates, a move that might have eased pressure on bank balance sheets stuffed with government debt.

A second liquidity crisis in February 2001 saw the stabilization program collapse. Turkey entered a deep recession, GDP that year falling by over 5%.

There were other, external factors at work too, which may have played a part and which carry faint echoes of today's environment. A sharp rise in oil prices put upward pressure on inflation and made the current account problem worse. The Dollar rose against the Euro – a problem for Turkey, most of whose imports are priced in Dollars while its exports receive mainly Euros.

Another source of pressure was the US Federal Reserve, which raised the fed funds rate from 5.5% to 6.5% over the course of 2000 – reducing the relative appeal to investors of putting their money in higher yielding emerging market securities. Today's Fed seems very far from raising its interest rate, but as the US economy starts to show signs of improvement, investors and policymakers alike are beginning to consider what will happen when it eventually does.

Against this historical background, Turkish policymakers have taken a number of steps in recent months that they hope will be sufficient to deal with today's threats.

The central bank's November Financial Stability Report shows that while the banking system as a whole was viewed as still being reasonably strong, concerns were growing last year about whether it had adequate liquidity to keep things ticking over.

"It is noteworthy," the report says, "that the weight of FX assets and FX liabilities on the balance sheet has been on the rise."

Furthermore, banks' Foreign Currency Liquidity Adequacy Ratio – the foreign currency value of assets compared to value of liabilities of a similar maturity term – has been falling: 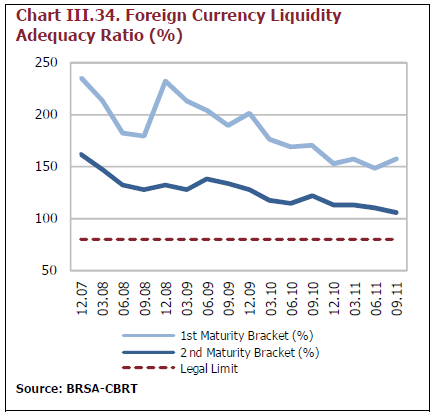 In other words, foreigners have been building up claims on Turkey's banks, while the ability of banks to meet those claims has been diminishing. Were asset values to fall too far, banks' solvency could be called into question – and even if banks remained technically solvent, they could still face a liquidity crunch if too many of their creditors decided they wanted their money back at the same time.

Last year, as the Eurozone crisis was intensifying, this looked a distinct threat. The crisis increased the likelihood that foreign lenders, especially in the Eurozone, would pull their money from Turkey as they ran into trouble themselves, or demand higher interest rates to compensate for the greater perceived risk.

Anticipating the possibility that banks would need additional funds to meet greater payments to lenders, Turkey's authorities undertook a number of measures aimed at boosting banking sector liquidity, which included the following:

On August 4 2011, the central bank's Monetary Policy Committee agreed to cut its benchmark policy interest rate – the one-week repo rate – from 6.25% to 5.75%. At the same meeting, the MPC "laid the ground" for additional liquidity provision "in case of possible financial turmoil". This included a reduction in Turkish Lira required reserve ratios – the amount of cash banks have to hold back as a proportion of their assets – as well the central bank providing foreign exchange liquidity "in case of unhealthy price formations due to a decrease in the depth of the foreign exchange market", a measure which came into effect on October 5.

It's clear that the authorities want to make sure Turkey's banks have sufficiently liquid reserves to meet their liabilities – and especially their foreign currency liabilities, hence the tweak to prevent gold being substituted for Euros and Dollars.

Much like 12 years ago, though, the central bank is in a bind. If it uses its reserves to provide foreign exchange liquidity, it risks inviting a speculative attack on a currency that lost 16% of its value against the Dollar last year. Similarly, if it is too aggressive in providing domestic currency liquidity it will also undermine the Lira.

Turkey has arguably run up against the limits of accommodative monetary policy. And it has turned to Gold Bullion as a potential lifeboat.

In a sense, Turkey's banks are being encouraged to treat gold as a quasi-foreign currency – but one whose depositors are domestic citizens, who are traditionally less inclined than foreign depositors to pull their money at the first signs of trouble.

Turkey's banks have offered gold accounts since the mid-1990s, but most of the gold in private hands – an estimated 5000 tonnes (worth roughly $260 billion at today's Gold Price) – is still held in physical form well outside the banking system. Hence these reported plans to encourage more people to put their gold in a bank.

It remains to be seen how successful any such attempts will be – both in terms of how many people deposit and how effective that will be at supporting the banking system. But if anyone asks you "Why is Turkey turning to gold?", answer them this: "It's the liquidity, stupid."

Investing in Gold? Make it safer – with investment-grade Allocated Gold stored securely outside the banking system in private professional vaults – and pay the lowest price possible when you own gold through BullionVault...