END_OF_DOCUMENT_TOKEN_TO_BE_REPLACED

GOLD BULLION traded in London fell back through $1900 for the 5th time in a week on Thursday, retreating after prices in China sank for a 2nd day following news of new anti-money laundering laws and fines in the metal's No.1 consumer nation.
Spot gold prices then fell further as new US jobs data came in well ahead of analyst forecasts for May, dropping to the lowest in almost 2 weeks below $1880 per ounce.
Longer-term interest rates edged higher again after ADP Payrolls said the US added almost 1 million jobs in May, nearly 50% more than Wall Street's consensus forecasts.
With the US Dollar extending its rally on the FX market, Western stock markets also fell, following China and Hong Kong lower.
But "meme stocks" Blackberry (NYSE: BB) and AMC (NYSE: AMC) held firm after surging again on social-media calls to buy their shares in a "short squeeze" forcing bearish traders to close their bets at a loss.
Today's benchmark price on the Shanghai Gold Exchange – the only legal route for refined bullion into mainland Chinese circulation – came 2.1% below Monday's 4-month high.
That crushed the premium for bullion landed in China, over and above the global reference price of London settlement, from last month's average of $8.65 per ounce – right in line with the typical historic incentive for new imports – to a discount of more than $10 yesterday and now $25 today.
With bullion exports banned from China, last year's collapse in domestic demand saw Shanghai prices drop to a record $90 per ounce discount to London gold as global set their current all-time highs above $2000 in August. 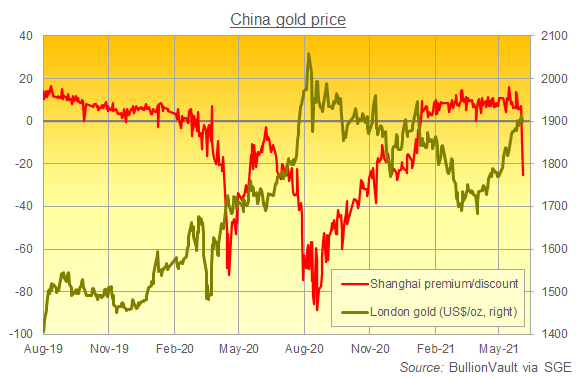 "The SGE premium for gold [has] collapsed," says a note from Swiss bullion refiner and finance group MKS Pamp, "a reaction to AML headlines out of China regarding precious metals on the exchange.
Unchanged in scope since 2007 and last updated in 2014, a draft of new anti-money laundering rules for China – now the world's 2nd largest economy – were published Tuesday by central bank and finance regulator the People's Bank of China, part of an update now underway since end-2020.
The proposals include widening the regulatory net for checking client IDs and source of funds to non-bank lenders, real estate companies, accounting firms, asset managers and also "precious metals exchanges" – of which the SGE and the Shanghai Futures Exchange are the only 2 legal examples – plus fines equal to $1.6 million for non-compliance.
Last month the PBOC updated its 2017 ban on cryptocurrency trading exchanges in China, banning financial firms from providing any services to any business involved in cryptocurrencies.
But Chinese traders have simply switched to using foreign-based crypto platforms instead, says Bloomberg.
UK finance authority the FCA is meantime seeing "an unprecedented number" of applications to register with its AML and counter terrorist financing regime being  withdrawn by crypto-related businesses, leading it to extend the end date of its Temporary Registrations Regime (TRR) for the sector from next month to March 2022.
"Even if a firm is registered with the FCA," says the regulator, "it is not responsible for making sure cryptoasset businesses protect client assets (ie customers’ money)."
Bullish betting on AMC and Blackberry via highly-leverage options contrast "were among the most popular in the entire market" yesterday, says the Wall Street Journal.
Smartphone and pager brand Blackberry (NYSE: BB) has now doubled in price over the last 2 weeks but remains 40% below February's 9-year high, also driven by chatter on the Reddit forum calling it "our next meme stock".
Movie-theater owners and operator AMC (NYSE: AMC) has meantime seen almost 5,000 social-media comments in the last 24 hours according to sentiment tracker Swaggystocks, more than 4,000 of them "positive".
Giant silver ETF the SLV in contrast showed just 17 mentions today, but calls to buy the ETF and also  buy silver made via the Reddit/wsb forum in late-January saw silver prices jump from $25 to $30 per ounce.
Silver prices today traded 2.0% lower for the week so far, dropping to 2-week lows alongside gold bullion to slip below $27.40 per ounce.
Issuing new shares this morning for the 2nd time in 3 days, AMC warned investors against buying its stock because "trading dynamics [are] unrelated to our underlying business, or macro or industry fundamentals...[creating a] risk of losing all or a substantial portion of your investment."