END_OF_DOCUMENT_TOKEN_TO_BE_REPLACED

Gold imports can go in, but cannot get out of the 2 biggest end-markets...
CRAZY but true, writes Adrian Ash at BullionVault.
The world's two largest gold-buying nations both restrict the export of bullion.
Hence the big discounts currently hitting India's giant gold retailing industry. Hence the irrelevance of China's world-beating demand and supply to global gold prices, despite the world's second largest single economy mining more ore – and importing more bullion – than any other country.
India and China don't ban gold exports entirely. India briefly became a net exporter of gold overall in spring 2009, for instance, when the global financial crash sank demand and boosted secondary sales by households. But the underlying bullion flows were hard to spot behind the "finished product" exports, and India's Handbook of Procedures for international trade now demands 3.5% value is added before gold jewelry can be shipped out, at least 1.5% on medallions and coins, and now 6.0% or more on gold items studded with gems (that way, Delhi can tax the added value).
China likewise allows the export of jewelry and other gold products – kicking open the door to outflows of crude "semi-manufactured" lumps. But while China and India combined now buy 1 in every 2 ounces of gold sold to end-users each year, none of that metal can flow out anything like as easily.
"Hotel California," joked one bullion-bank director to me at last week's London Bullion Market Association bash at the Museum of London. "Easy to get in, but then you can't leave!"
Whatever hassle and friction these export bans create for importers and traders, however – spurring this call, for instance, as long ago as 2003 from a Dubai dealer for easier export rules – it's a real drag for Asia's biggest gold markets. "If we were able to export the gold back out of the country without constraints," wrote fund manager Chirag Mehta of Quantum AMC in Mumbai last month in the Economic Times of India, "the [domestic] market might be in equilibrium to the international parity rates."
Whereas, with India's wholesalers currently glutted with gold – but unable to ship it out to the world's wholesale bullion market – discounts have yawned to $50 below the global benchmark of London prices. A similar but less dramatic discount hit China in 2014, thanks first to the huge flows sucked in during the previous year's gold price crash, but also to the explicit ban on re-exporting excess stockpiles.
Because Indian and Chinese stockpilers like to buy at low prices, letting them sell higher up could bank a net gain for their respective trade balances. China doesn't need that, perhaps, not yet. But for India, "the government would get Dollar inflows as well," Mehta goes on, "and ease some pressure of the depreciating Rupee." Which sounds just the kind of thing Narendra Modi's self-proclaimed reformist and pro-business BJP government should love to achieve by free-market means.
No matter. Rather than unchaining India's giant gold processing, manufacturing and retailing industry (unlike China, it has next-to-no domestic mine output), the Modi admimistration's latest Budget did nothing last week for exports, but raised gold import duty on semi-refined ore instead, and slapped an extra 1% sales tax on consumers, too.
The industry is united in protesting against this new excise levy, shutting shops that could otherwise meet spring 2016's growing wedding season and festive demand for gold. But while the state-sanctioned block on inflows makes the headlines, it is India's inability to re-export bullion which really distorts and damages its domestic gold industry. 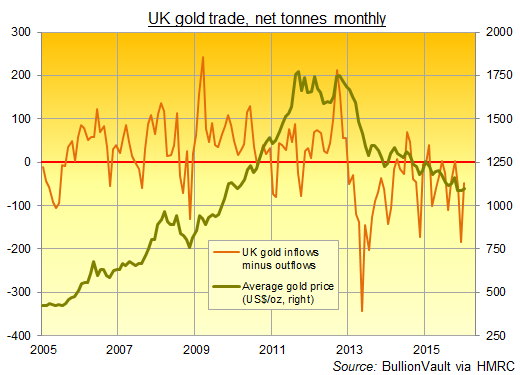 Contrast London – heart of the world's wholesale bullion trade. Metal comes in, metal goes out. So much of the stuff, in fact, that gold bullion regularly features in the UK's top 5 imports and exports, despite the UK having zero mine production, no wholesale-market approved refineries, and next-to-no consumer demand.
Does the lobster-pot of India and China's gold markets mean London must slowly lose metal until nothing is left? The last 3 years together have now seen 65% of the previous 7 years' inflows shipped out, primarily heading for end-buyers in China and India but also destined for those importers who would – if they could – turn exporters as price and demand dictated.
But that still leaves 1,000 tonnes accrued by bullion banks, their clients, and other private owners of wholesale gold in London vaults since 2005. And if prices continue to rise, one can only expect the pattern of net inflows -- led of course by those same money managers and wealthier families whose investment pushes up prices -- to return as well.
China and India's households, as with any consumer market, buy more when prices fall. Investors, in contrast, buy more when prices rise. And prices have risen sharply so far in 2016, suggesting that wealth managers and other big-money investors will have been adding metal in London bullion bank accounts and specialist custodial vaults.
Either way, there is plenty of gold traded globally outside the big Asian centers – and there is currently plenty of metal available in London's wholesale market, too.
Meantime, "sources" say that April 19 will bring the first-ever Shanghai Gold Fixing – a new benchmarking auction to ape and then overtake the century-old process now refreshed in London as the LBMA Gold Price.
Good luck with that. Ten banks classed as market makers will bid and offer metal to help find that single price which does the most business. But lacking the ability to ship out bullion to the wider world, China's new fixing will remain a wholly Chinese affair.
It's the ability to ship it out which entices it in. Maybe someone should tell Beijing, nevermind New Delhi.