END_OF_DOCUMENT_TOKEN_TO_BE_REPLACED

Budget 2016 hikes gold bullion and doré duty, adds 1% sales tax...
GOLD TAX on India's huge jewelry and bullion sector has risen and not been cut as the industry hoped in Monday's new 2016 budget from finance minister Arun Jaitley.
Tax advantages went instead to the Sovereign Gold Bond investment schemes, issued by the Reserve Bank of India, and also the Gold Deposit and Gold Monetisation schemes, also launched with little success to date in late 2015.
Trade lobby the India Bullion and Jewellers Association (IBJA) – a keen supporter of the ruling BJP party led by Narendra Modi – immediately called a strike to start Tuesday in protest at a new 1% excise duty, levied at the point of sale.
The All India Gems & Jewellery Trade Federation (GJF) – already at odds with the government over last year's cut to tax declaration thresholds on gold purchases – then called a strike for 3 days starting Wednesday.
Budget 2016 aims at "boosting farm growth and appealing to the rural poor," says the BBC, summarizing Jaitley's headline policy of doubling farming incomes by 2021.
"The 1% excise duty on jewelry has been re-introduced as a means of effectively taxing the upper and middle classes," say specialist precious-metals analysts Metals Focus, "which are seen as being the main purchasers of jewelry, with the proceeds used to fund projects for the wider community."
But "it will impact 90% of jewelry manufactured by small and micro-sector [workshops]," complains Saurabh Gadgil of PNG Jewellers in Pune.
Indian farmers' union Bhartiya Kisan Union (BKU) calls the rural incomes plan "a dream", saying that insuring crop values will only benefit insurance providers, not farmers.
Jaitley also proposed a 1 trillion Rupee pay rise (US$15bn) for government employees and pensioners in Monday's speech, rewarding perhaps 10 million people. But the 1,500-page Budget is "mysteriously silent" on how the the BJP government of Narendra Modi – elected in 2014 on a reformist, pro-business platform – will fund it, according to one Mumbai economist, speaking to the Mint newspaper.
Ahead of Monday's Budget, India's improving trade balance had seen rumors and expectations spread that Jaitley would cut the current 10% duty on imports of gold bullion. 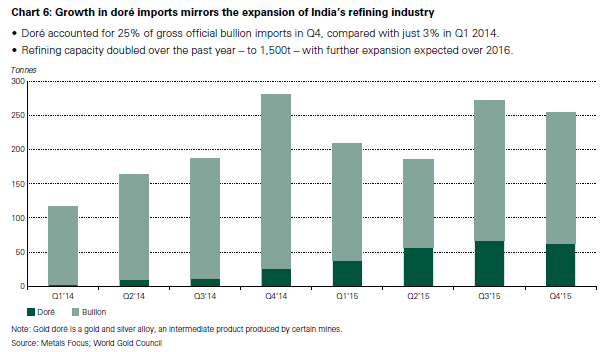 Instead, the finance minister raised India's lower rate of duty on doré bars – an 'intermediate' product consisting of gold and typically silver and delivered by some mines straight to final refiners – cutting the advantage for India's fast-growing doré refining industry, especially those facilities built inside the 'excise-free zone' in the northern states of Himchal Pradesh and Uttrakhand, explains Metals Focus.
Over-investment saw India's domestic gold refineries face near-closure due to lack of business – and huge over-capacity – in 2012. Thanks to the doré tax advantages then imposed in 2013, "Capacity has now surpassed 1,500 tonnes [per year]," Metals Focus says, "around 1.8 times higher than Indian gold demand.
"The duty differential has been the sole reason for the expansion in refining capacity, enabling small and medium-sized refineries to offer miners highly attractive premiums for their doré."
Under Monday's section on tax "rationalization [and] anti-avoidance" however, Jaitley raised import duties on gold doré from 8% to 10%, and also cut the tax-free zone's advantage over other doré refiners from 1 percentage point to 0.75 by value.
Capital tax gains, in contrast, should be abolished for investors in the government's Sovereign Bond Scheme, Jaitley proposed. Households, temples and other gold-owners choosing to relinquish jewelry or bullion by putting it on 'deposit' with commercial banks should also be exempt from CGT, he said.
The world's largest consumer market for physical gold, India imported more than 1,000 tonnes of gold in 2015, according to data published by industry-development organization the World Gold Council – equal to 25% of total global end-use demand last year.
Since launching in November 2015, the Gold Monetisation Scheme – aimed at trying to meet some of India's new demand with metal from the estimated 20,000 tonnes already in private hands – has so far gathered barely 1 tonne, India's parliament was told last week.
The Sovereign Gold Bond scheme, also aimed at reducing imports by diverting investment money away from physical metal, attracted only 0.9 tonnes-worth of money at the November 2015 launch.
A further 3 tonnes-worth of bonds went on sale in January, offered below the prevailing gold price.