END_OF_DOCUMENT_TOKEN_TO_BE_REPLACED

Now, this game isn't new of course.
In fact, the sport has been growing faster than China's gold reserves for 5 years and more.
We've long enjoyed playing it too, pointing out...just like today's new players...how the visible data about China's demand and supply simply don't add up.
Conclusion? The gap between China's supply and demand MUST be going to the central bank, right?
Or so everyone seems desperate to think. Even though, if that were true, it would clearly say Beijing's gold hoarding means less than nothing for world prices, now slipping again below $1180 today.
Still, this was the game played again at Bloomberg's recent Precious Metals Forum at its plush offices in London. The prompt was Bloomberg's own thesis that China's politburo may be planning to launch a Chinese Gold Standard if the US-controlled IMF doesn't give the Yuan the respect it deserves at this October's half-decade review of the monetary system.
So, retro-fitting a reason for China to need huge gold reserves, and starting from the 2009 announcement of 1,054 tonnes, maybe Beijing now holds 3,000 tonnes...matching Germany's national hoard (and the consensus estimate amongst professional analysts).
Or maybe Beijing now holds 5,000 tonnes...only just behind the United States' 8,000 tonnes.
Or maybe, at the top end, the People's Bank actually holds fully 30,000 tonnes...a wild stab at click-bait which, as with so much tomfoolery about China's gold, is now becoming a 'fact' sold back to China itself!
Thankfully, and alongside this latest dose of Kremlinology, Bloomberg's seminar in the City also brought lots of useful analysis from useful analysts as well. Most notably, on China, ex-GFMS chief Philip Klapwijk of Precious Metals Insight showed how between 1,200 to 1,500 tonnes of gold are now tied up in 'shadow banking' and used as collateral for cheap loans.
Moreover, Klapwijk confirmed how Chinese dealers have been exporting gold bullion – in defiance of the country's strict export ban – by shipping it out as very plain jewellery and other 'crude' items, into Hong Kong, where it simply gets re-melted and turned back into kilobars for the bullion market.
This trade took quite a dive in early 2015, according to Klapwijk's presentation, no doubt caught or scared by Beijing's big and sudden anti-corruption drive. 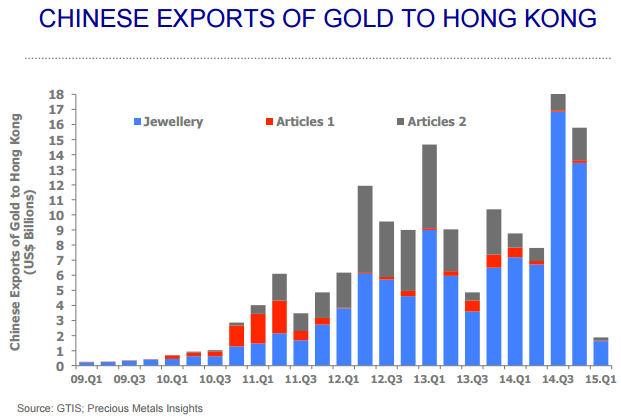 So as Australia's Macquarie Bank noted earlier this year, China's officially reported gold exports of 750 tonnes in 2014 certainly did include gold bullion outflows. Only, they didn't take the form of investment bars – not when they were shipped – to confuse the Chinese customs officers.
What did these hidden gold bullion exports look like? Our guess would be lumpy gold chains via the 'jewelry' category...or 'articles' more or less crafted such as  lucky gold cats...or perhaps little gold bricks commemorating the Great Wall of China.
Either way, today's Chinese bullion smugglers are unlikely to choose the Eiffel Tour paperweights used by British dealers to get around the UK's export ban after the end of WWII.
Just be careful no one mistakes it for a genuine souvenir!

Yes, that 1951 comedy film – The Lavender Hill Mob – was in fact very close to the truth.

Because with London then (as now) the center of world bullion flows, "This technique," explains miner-and-refiner backed information site GoldAvenue, "was widely used in the late 1940s for unofficial gold exports. The gold was officially allocated as for manufacture into 'artistic' objects which, once exported, were remelted into gold bars for smuggling to India."
James Bond's 1959 caper Goldfinger also "had real insights into the black market in gold at the time," with the villain's trick of smuggling recycled scrap gold as panels of his Rolls Royce car "based on actual tricks of the trade."
Despite China's official ban on gold bullion exports then, the metal has still found a way out, as well as in. Beijing's crack-down may be harsher than the UK authorities managed seven decades ago. But the more the world's gold market changes, the more it simply repeats trading patterns seen long ago.
That makes it very unlikely Beijing will declare a Gold Standard or anything similar because it has hoarded a mountain of gold. It never happened that way before. Quite the reverse, in fact, as Europe and the United States' nationalized hoarding of the late 19th and early 20th centuries shows.