END_OF_DOCUMENT_TOKEN_TO_BE_REPLACED

Who needs gold when you've got, umm, Ben Bernanke...?

"To HOARDERS and speculators," says Time magazine, "gold lately has had about as much luster as a rusty tin can."

Rings true here in Feb. 2013, writes Adrian Ash at BullionVault. But this clanging bell – entitled The Great Gold Bust, and drowned out as a signal to fill your boots only by the New York Times' infamous Who Needs Gold When We Have Greenspan? of May 1999 – was rung back in Aug. 1976, right at the very nadir of a 50% pullback in the 1970s' long bull market in gold. 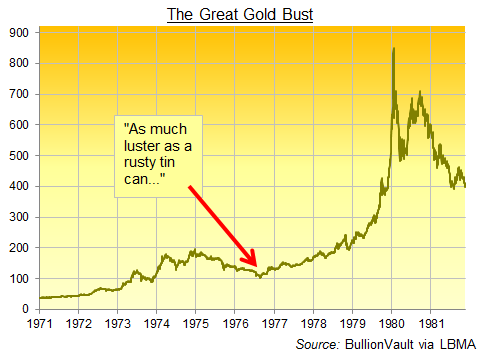 Sound spooky? "This is a commodity that people thought was going to $2000 an ounce and beyond," gasped a MarketWatch video at the WSJ just last week. "This was a commodity that was rising almost parabolically, exponentially...

Well, perhaps. Gold's 21st century bull market has certainly lost its milk teeth. It was 10 years ago this month, in fact, that the number of bullish gold futures on the US Comex market held by professional speculators first broke above 100,000 contracts.

And to celebrate that anniversary, last week the number of bearish contracts held by that same group – professional speculators – leapt above 90,000 for the first time since mid-1999... 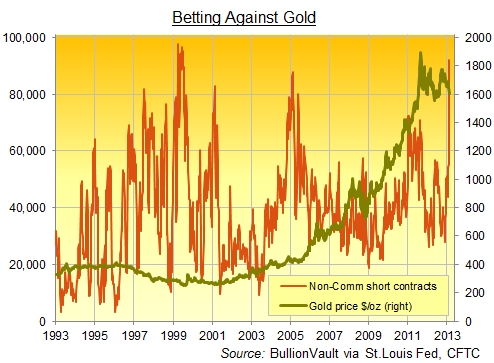 Coinciding with the New York Times' praise for Alan Greenspan versus gold, mid-1999 was in fact the only other time when speculative betting against the gold price reached last week's size.

Back then, as die-hard gold bugs will recall, Gordon Brown squished the price to 20-year low beneath $255 per ounce, announcing in advance that he would dump half the UK's gold reserves just as the Swiss voted to sell huge chunks of their massive gold reserves too.

Gold has come a long way since its Brown Bottom. But gold speculators and hoarders?

"Investors display lowest optimism about gold since end of 2008," says Commerzbank, looking at the net balance of bullish minus bearish bets held on the US futures market by Non-Commercial traders (aka hedge funds and other "managed money" traders). And no fooling... 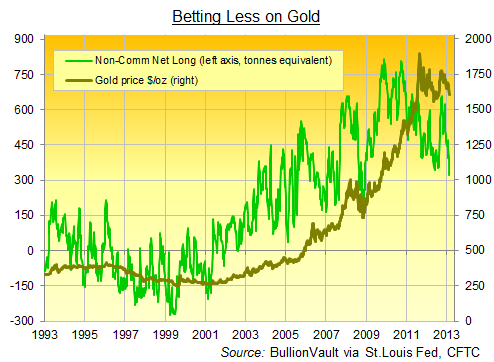 The reasons for gold's new-found bearishness? In truth, it's been coming for 18 months, as analysts from Credit Suisse and Goldman Sachs will tell you, pointing to the price peak of – umm – 18 months ago a mere year-and-a-half after the, umm, peak. But what with gold prices failing to make new highs, the Eurozone crisis must be as near-to-finished as the broader global financial crisis. The US Fed is also about to start raising interest rates much sooner than anyone expected, driving a stake into the heart of the case for gold as cash-in-the-bank starts to pay a real return once again.

Or so runs the fast-rolling bandwagon. You can measure its momentum in the Net Long position of professional traders on the gold futures market. It shrank dramatically over the last 3 months, down 43% to its smallest level since just after Lehmans collapsed. That rate of change has been outpaced only 10 times in the last decade.

The average change in the gold price over the 3 months that followed? A tasty 7.8% on BullionVault's analysis today, with only 3 of those 10 occasions failing to deliver a positive 3-month return (and even then managing only a 2.1% drop).

Still, a gold bull market gripped the last decade, of course. And whether the recent bearishness will run deeper or turn tail, time will tell (or not. According to its online archive, Time magazine has given few column inches over to gold investing since the Sept. 2011 highs). Meanwhile, the bearish bandwagon may already have lost a wheel. Italy's elections and the Fed chairman's latest speech today don't quite fit that consensus.

Straws in the wind maybe. But they don't quite fit a long-term drop in gold prices either. Which may be too bad for long-term gold buyers hoping for a proper pullback in prices, such as 1975-1977 offered.