END_OF_DOCUMENT_TOKEN_TO_BE_REPLACED

Gold and silver bears are now deafening. If that's bullish, these ratios are less clear...
MARKETS make opinions, writes Adrian Ash at physical gold and silver exchange BullionVault.
And right now, the gold and silver markets are making bears out of pretty much every professional trader, analyst and journalist with an internet connection.
"Gold's slump is here to stay," says MarketWatch.
"Silver prices will take 20 years to bottom," says this chart-watching trader.
"A definite break [in silver below] $14.20 will mean further downtrend towards...even $13.15" before the next bounce, says technical analysis from French investment and bullion bank Societe Generale. "Gold could go as low as $800 an ounce," says Bloomberg, quoting a bunch of forecasters.
But 30% lower isn't low enough for Germany's Deutsche Bank analysts. "Gold would need to fall towards $750 per ounce," they say, "to bring prices in real terms back towards long-run historical averages."
"The yellow metal," agrees an op-ed column in India's Business Standard newspaper, "tends to have very long historical cycles.
"[Even after] this substantial correction...the long-term record shows gold literally spent decades trading below $400."
$400 the ounce?! For all we know, these gold and silver bears could prove right. But when everyone turns bearish, there's no one left to sell or short, meaning prices can only go up. Sadly for would-be contrarians, plenty of bloggers and private traders will already take the other side of that bet, sensing a bullish turn in gold's near-universal bearishness in mainstream finance and media.
Whatever the impact or confusion of irony, silver's latest bull market never got close to its 1980 top in real inflation-adjusted terms, only managing a nominal match near $50 per ounce in spring 2011. Gold took 28 years to break its 1980 peak in Dollar terms, and never quite got there adjusted for consumer-price inflation, as this chart of the ratio shows, before turning south. 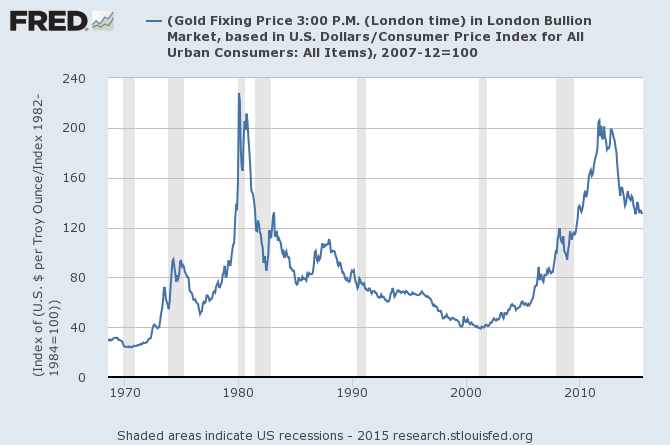 Seen from the average, however, gold still ended last month some 55% above its long-term mean value for US households since 1970. So on that metric, at least, it isn't expensive or 'cheap' at present.
Checking gold against other asset prices doesn't scream 'buy' or 'sell' either right now. Priced against industrial commodities, for instance, "Dear old gold is still expensive vs. all that useful stuff," says one long-time trader. But measured against US business assets – as priced by the S&P 500 index of America's biggest stocks – gold has dumped more than two-thirds of its value since the summer of 2011.
Even at that top, gold never recovered anything like its peak value against US equities of early 1980. But if it is fated to keep going down from here, gold has a long way to go before matching the screaming value of the DotCom Bubble. 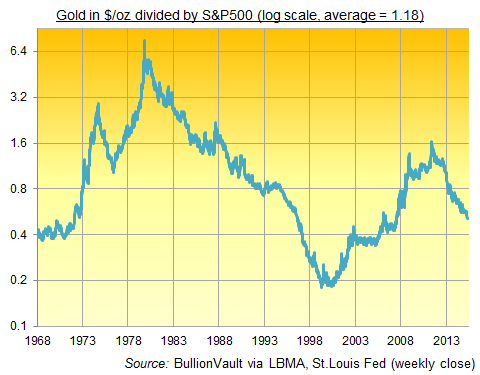 What about real estate? Taking the house-price obsessed UK as a proxy, the average UK home – now costing some £200,000 according to the Lloyds-Halifax HPI data ($310,000) – would currently need some 286 ounces of gold. The government's more official data, based on Land Registry figures, would put it nearer 390 ounces, thanks to an average mix-adjusted house price of £275,000 at last count. 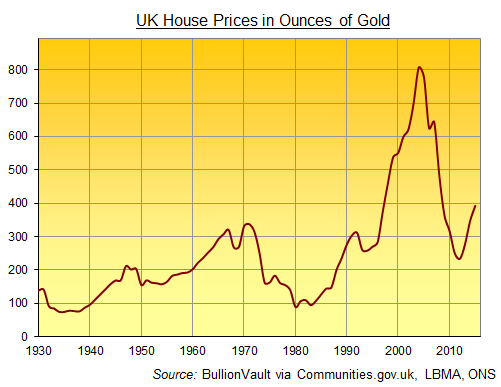 Either way, that compares with the 20th century's repeated low of 100 ounces of gold to buy the average UK home. Real estate in the world's most real-estate obsessed economy got down to that price twice, plainly marking gold as dear (and housing cheap) during the Great Depression and late-70s inflationary crisis.
At the other end of the graph, the peak house-price-in-gold came above 800 ounces a decade ago, when gold looked an absolute steal against Britain's way over-priced housing stock.
Basis such ratios then, gold is neither cheap nor expensive right now. Traders trying to call the very bottom might be early. But the long bull market starting 2001 may alternatively just be taking a pause. A long pause yes. But gold did drop almost 50% during the long 1970s' bull market, halving from $200 to barely $100 per ounce during 1975-1976.
Gold then shot 8 times higher before making its ultimate 1980 peak. That top came at $850 per ounce. For reference, silver had no such pullback.