END_OF_DOCUMENT_TOKEN_TO_BE_REPLACED

Conflict doré poses 'risk' to India's gold bar boom...
NO, the WORLD doesn't face 'Peak Gold' anytime soon, writes Adrian Ash at BullionVault.
That idea – where all the gold still waiting to be mined is about to hit its limit and so annual output tips into unending decline, just like crude oil hasn't – simply doesn't hold.
Global mine output grew for the 10th year running in 2018, setting its 9th new all-time record in a row. Such break-neck growth might slow or pause in 2019, but while discovery rates are falling for the world's major miners (consultants McKinsey reckon underground reserves at the world's top 20 have shrunk by one-quarter since their ill-timed M&A splurge of 2012), the current No.1 nation – China – remains under-explored, and small-scale mining across emerging economies is booming.
There's more gold to come, in short, both now and long term.
But who mines that gold however, and how it then reaches investors, newly-weds and smartphones, is a different matter. Because there's only ever so much gold to go around at any one time, and that boom in often illegal, sometimes violent small-scale gold mining means that a 2-tier market is developing in gold bar refining, while growing competition to process the legal, clearly-sourced stuff is pushing down margins for the big London Good Delivery-approved players.
Gold's No.2 consumer nation India, for instance, is making a push to become a major refining center for the metal. It might help if the government didn't ban the export of bullion bars. But either way, the industry is struggling to find enough metal. 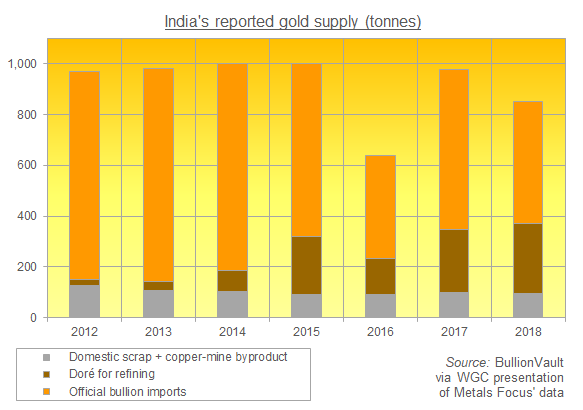 With next-to-no domestic gold mining output, India is the world's heaviest net importer of gold, needing an average of 895 tonnes per year to meet household and industrial demand over the last half-decade on data compiled by the mining industry's World Gold Council.
To reduce the impact of this gold inflow on India's current account deficit with the rest of the world, New Delhi has since 2012 tried a raft of different policies, some smarter than others but all pretty ineffective so far – except a tax advantage to domestic refiners.
India's gold dealers pay a lower rate of import duty on doré – a rough alloy made at the minehead, typically containing silver and costing a little less to buy than refined gold – than on imports of finished bullion bars. Last year that saw India's imports of doré rise another 10% to reach 276 tonnes according to specialist consultancy Metals Focus. This unrefined metal accounted for some 36% of all official gold imports, up from 29% in 2017 and leaping from barely 4% just five years before, thanks both to doré's own growth but also to a drop in refined bullion bar inflows.
Tax rates can and do, in other words, change behavior. Import duty now stands at 10% on refined gold bars and 9.35% on doré, but that 0.65 percentage-point gap still offers a sizeable incentive for domestic refining, because " all it takes is a value addition of mere 0.15 per cent to convert dore to refined bars" according to Sudheesh Nambiath and Professor Arvind Sahay of the India Gold Policy Centre, writing in the Economic Times.
"However," note Metals Focus in their new Gold Focus 2019, "it is worth highlighting that despite the jump in doré imports, refinery utilisation rates in India remain low at just 20-30%, as only a small number of firms are to consistently source doré."
So what growth there is risks breaking international rules on money-laundering and human rights warn industry insiders, by taking in supplies from those illegal sources. That could keep India-made jewelry unattractive for foreign consumers against more expensive Swiss-processed items, hurting New Delhi's flagship aim of transforming 'Make in India for India' into 'Make in India for the world'.
This threat isn't new. Illegal gold flows from Ghana to India, for instance, made headline news in both the West African nation (" Indians hijack Ghana's gold market") and in India (" Conflict gold entering India through Ghana") back in 2015.
But its impact looks potentially worse now that India is pushing to cut its trade deficit by growing exports at the same time as Western nations are pushing ever-harder against "conflict minerals" and human-rights abuses in the supply chain of key consumer goods.
Just this week, officials from the State Department apparently demanded to meet in New York with 25 jewelry chiefs. There they called the Kimberly Process for verifying the source of diamonds "inadequate" in fighting "malign regimes" and announced that Washington is therefore preparing to demand "country of origin" for all US jewelry imports.
You might suspect a move to check and perhaps block inflows from, say, China here. But "whatever you can name, you can put a check mark next to it," one attendee says of what's coming. And that would fit neatly with India's push to formalize its own $35bn per year gems and jewelry industry, employing maybe 4.5 million people. But where the shock of 2016's demonetisation, of higher sales tax, of wider financial access for rural families and of the looming move to make hallmarking mandatory all pull in one direction, India's deep love of cheap gold means the 'grey' market is proving hard to shut down.
Mandatory hallmarking presents a huge change to jewelers in India, where data revealed to the global bullion industry's annual LBMA conference in 2016 said that refiners recycling scrap items found an average gold content of just 60%, rather than the 91% promised by the country's standard 22-carat grading. It also risks bringing in more conflict- and human-rights-abuse gold, worsening India's domestic 2-tier market, because " there will be two rates of gold" according to an industry source quoted by the Business Standard this month – "one for gold which has bar serial number (or held in depository) and other which doesn't...cheaper by 10-15%."
"The risk associated with [refining industry] growth shouldn't be ignored," say Nambiath and Sahay of the India Gold Policy Centre.
"Increasing incentives to refiners and increasing refining capacities [won't by itself] achieve the goal of India as refiner for the world...Adherence to OECD's due diligence guidelines is the key, and [only] then comes the fineness, quality and designs."
More to come in Part 2, this time on the ever-more regulated refining of London Good Delivery gold bars...