END_OF_DOCUMENT_TOKEN_TO_BE_REPLACED

Surely Germany knows it's on the hook for the debt crisis. So why would it want to get in even deeper...?

German chancellor Angela Merkel told her party conference this week that the solution to the Eurozone crisis is "more Europe". At the same conference, finance minister Wolfgang Schaeuble said Europe needs "to build the political union that we didn't manage to achieve in the 1990s."

"That means fiscal union," he made crystal clear.

Schaeuble is echoing the words of Juergen Stark at a conference earlier this month:

"We need bold steps toward a fiscal union," said Stark – who resigned as European Central Bank in September over its decision to buy government bonds.

"We need to go beyond and create a financial union. In one word, the crisis has clearly shown us that we need 'more Europe.'"

This is heady stuff – especially when you consider that Merkel has said commonly-issued 'Eurobonds' are "not a sensible idea". How to interpret Germany's lurch towards such integrationist rhetoric?

One way is to take it at face value. An alternative interpretation is that Germany is simply buying time.

Let's take the face value interpretation first. Germany is terrified of the idea of the European Central Bank monetizing sovereign debt. Though it is forbidden from buying government bonds directly – by Article 123 of the Lisbon Treaty and elsewhere – this hasn't stopped it buying Greek, Portuguese, Irish, Italian and Spanish bonds on the open market, in the hope of forcing down their yields. This hasn't really worked, so the next logical step is to ignore the rules and buy the debt direct.

Advocates of such a move say it is the only way to credibly stop the rot, since the ECB has 'unlimited funds' (what they actually mean is it can put the debt it buys on its balance sheet and create the Euros to pay for it). Anything less than this will be an open invitation to speculative bond market attacks.

Germany doesn't like this idea – understandably, given the Weimar hyperinflation still casts its long shadow. In truth, neither does Germany like the idea of throwing its fiscal lot in with the rest of Europe. But it has come to realize that it faces a choice – fiscal integration or debt monetization. It has chosen the former.

This, at least, is the face value interpretation of Germany's position. But might there be another explanation?

The Eurozone is in serious danger of breaking up. Everybody knows that. What some may not realize is just how close that moment could be.

Take a look at the following chart: 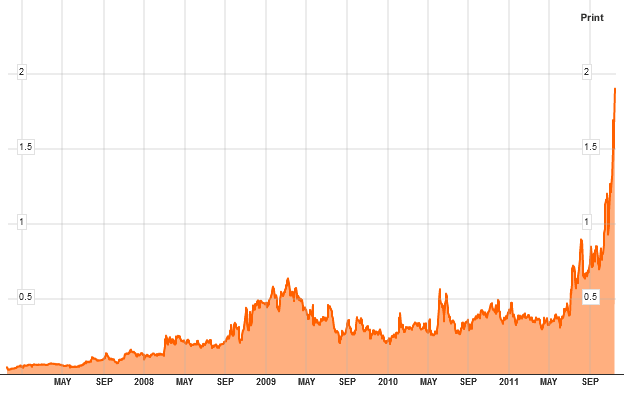 The chart shows the difference between the yields on French 10-Year government bonds versus their German equivalent – known as the spread over bunds. This spread hit a Euro-era high on Wednesday of 193 basis points (1.93 percentage points).

As you can see, this spread has risen sharply in the last month or so. This is what it looks like when a currency union starts to break apart. Bonds issued by the Eurozone's two largest countries are yielding very different returns.

It is clear the market no longer considers French government debt risk-free – despite its AAA rating (if you ignore Standard &Poor's somewhat Freudian accidental downgrade last week). This makes sense, especially when you consider how heavily exposed French banks are to Italy.

What is less obvious – at least, less obvious to many who are Buying Gold – is why German government debt is seen as such a safe haven. Yes, it offers a short-term bolt hole. Germany holds the Eurozone's checkbook, and it isn't going to let itself go under ahead of any other member.

And yes, many institutional investors are limited in what they can hold, and bunds do represent a AAA-rated, Euro-denominated, highly liquid asset.

But surely, sooner or later, Germany will be on the hook for all this? One way to understand the 'contagion' aspect of the Eurozone crisis is to think of a vast swarm of capital losses – most incurred years ago, during the boom – looking for someone to take the hit. German leaders must have noticed that these losses are heading their way.

Unless there's an alternative interpretation for Germany's integrationist stance. Maybe – behind all the rhetoric about "more Europe" and "fiscal union" – maybe Germany is quietly preparing to leave the Euro.

This may seem an odd idea – especially when you consider how much Germany's export sector has benefited from the Euro (something that Beijing-based economist Michael Pettis does an excellent job of demonstrating in his latest blog).

A German decision to unilaterally abandon the single currency must now at least be considered a possibility. Going back to the Deutsche Mark would be difficult – and would almost certainly hit Germany's export model as the currency appreciated. But domestic and international politics may make it impossible to save the Euro – and Germany's leaders may already have realized this.

Schaeuble said this week he would like to see a change to the Lisbon Treaty by the end of 2012, to enable greater fiscal integration. Some European Union members – most notably Britain – are opposed.

"In that case, we would ask them not to stop the 17 of us [in the Euro] from proceeding."

A European 'inner core' has long been a desire of French president Nicolas Sarkozy. Now, it would appear, he has Germany's backing. But it may be a feint – a ploy to buy time before a dash to the exit.