END_OF_DOCUMENT_TOKEN_TO_BE_REPLACED

If forgery covered quantity as well as quality, the private banking system would face jail today...

THOMAS McANEA didn't seem much of a threat to Britain's national security.

A failed businessman who drank too much, and an ex-con freed on a technicality, he had barely "two pennies" to rub together, according to the Scottish police.

But McAnea was also an expert forger, a specialist in faking holograms for official documents. And in January, 'Hologram Tam' – as his underworld clients knew him – was caught with nearly $1.7 million worth of counterfeit banknotes.

McAnea printed Chinese take-away menus alongside the fake cash as a cover to look legit. By the time of his arrest, the police estimate, Hologram Tam and his gang had put almost £700,000 of fake banknotes – more than $1.3 million – into Britain's financial system.

All told, according to the trial report in The Times, McAnea's printing works had the capacity to produce $4 million worth of counterfeit notes per day, "enough potentially to destabilize the British economy."

But that $4 million per day would have been peanuts compared to the money created by the UK's private banking sector. It's been helping to grow the money supply by more than $1 billion – each and every 24 hours – for the last year and more.

Might this flood of legitimate money "destabilize" the economy? It outweighs Thomas McAnea's threat 250 times over, after all. And if forgery were a question of quantity as well as quality, the entire banking system might be queuing up to empty its slop bucket tomorrow morning...right alongside Hologram Tam. 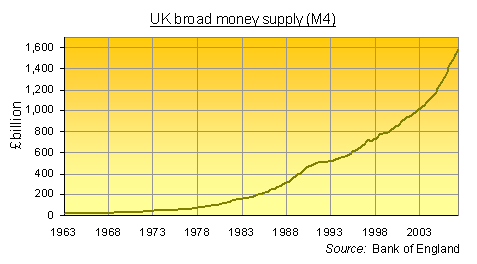 "Modern economists have difficulty in deciding whether they should define money as M1, currency plus demand deposits," writes Charles Kindleberger in his classic text, Manias, Panics & Crashes, "or as M2 – equal to M1 plus time deposits – or M3, consisting of M2 plus highly liquid government securities."

Does the way we define money matter? The US Federal Reserve says not. It famously ceased publication of its M3 data in March 2006, claiming that the measure "had not played a role in the monetary policy process for many years."

But lack of use didn't negate M3's value, however. Private economists have since pegged its growth rate above 10% per year. At the end of August this year, M3 growth hit 14% according to analysis by John Williams at ShadowStats.

"At least we should all be able to rest assured that a global deflation [a shrinking money supply] is not in the cards," as Rob Kirby notes for Financial Sense.

But across the Atlantic and here in London, inflation of the money supply remains on view to the public – and M4 remains the key money-supply data.

The broadest measure of money supply tracked by any central bank outside Chile (those crazy Latinos go up to M6), it covers all notes and coins in the British economy, plus bank deposits – both time and demand – and Sterling bank bills, as well as all commercial paper, bonds and floating-rate notes issued for five years or less.

In short, M4 measures what a 1959 commission called those "highly liquid assets which are close substitutes for money, as good to hold, and only inferior when the actual moment of payment arrives." And it has more than doubled in the last decade. M4 has risen by 65% since the "Deflation Scare" starting in 2002.

Forget for a moment, however, about the supply of what passes for money – even if it did grow by 13.5% in August from 12 months before.

Gasp instead at the surge in private-sector lending... 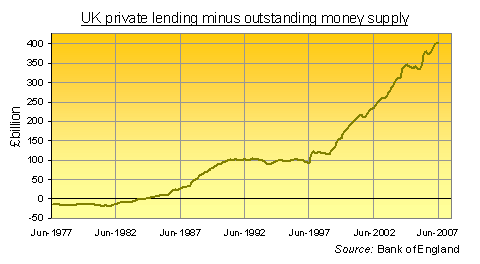 After lagging the outstanding total of M4 money throughout the 1960s and '70s, the volume of private-sector debt first ticked higher during Margaret Thatcher's deregulation of the financial services industry in the early '80s.

Then the real jump came, back when the current government took power in May 1997. The UK's money supply has very nearly tripled since then.

By the end of summer 2007...and just as the global "credit crunch" began to bite after the British economy had enjoyed 15 years of expansion, its longest boom ever in history...total private-sector lending in the United Kingdom outstripped the sum total of broad money by almost half of one year's entire economic output.

Put another way, private households and businesses in Britain now owe the banks 39% more in debt than actually exists in cash, bank savings and near-cash equivalents added together (August data).

Down there with the devil and his number-crunching detail, "most banks have advanced more loans to borrowers than they hold in savers' deposits," as The Telegraph noted recently. Little does the newspaper know that the situation applies right across the entire British economy. But the point is well made anyway.

The scam is simple enough to spot, if not to stop. Lending £6.60 against every £1 on deposit makes for a tidy "arbitrage" between the cost of paying bank savers and the income earned from debtors. And what The Telegraph's horrified exposé misses, of course, is that – on the banks' balance sheets – creating credit in this fashion looks simply beautiful.

Loans are called "assets", but cash-on-deposit is a "liability". So the more money the banks lend, the greater their assets. The less cash they accept from savers, the smaller their liabilities!

"The very fact of imitation," writes Glyn Davies of the Roman denarius in his magisterial History of Money, "indicated that the demand for money locally exceeded the official supply, a gap which the counterfeiter exploited directly for his own interest."

Fast forward two thousand years, and Hologram Tam was merely improving liquidity for his local economy, too – in this case, the economy of drugs dealers, junkies and pimps in Glasgow.

Britain's biggest mortgage banks have merely been doing the same, this time helping out would-be home owners with a flood of liquidity. It pushed the average house prices up three-fold in the 10 years to July 2007. The proportion of income going to service and repay the resulting mortgage debt doubled over that period to a record 32% per month.

Might this surge in "seignorage" – the profits earned first by medieval kings for issuing money, and now by the private banks for issuing debt – come to overwhelm the poor serfs plowing the fields and trying to decorate their newly-built starter homes (carpets and curtains included)?

It's not just Britain, of course, where money has been piling up without the bother of taking physical form as notes, coins or even a line in your banking deposit book. Prior to its untimely demise, the Federal Reserve's M3 data showed mark growth compared with the smaller, less inclusive M2 measure. 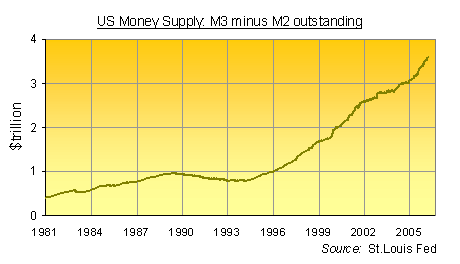 You'll note the upturn in the gap between M2 and its bigger cousin, the now-dead M3 money supply figure, right at the same time that Britain discovered the joys of private money creation in the mid-to-late '90s.

A global stock-market boom followed, and a housing bubble followed that when the frenzy in equities wore out. But in the Fed's own words, M3 included all of M2, plus large time deposits of $100,000 or more, as well as "term repurchase agreements in amounts of $100,000 or more, certain term Eurodollars, and balances in money market mutual funds restricted to institutional investors."

Put another way, a big chunk of the private banking sector's money is not included in M2. Now why would the Fed not want to track what was happening there?