END_OF_DOCUMENT_TOKEN_TO_BE_REPLACED

Why going over the fiscal cliff would have been a good thing...

The "FISCAL CLIFF" label evoked the fear that something terrible was about to happen if the previously legislated spending cuts and tax increases came into effect, writes Bud Conrad, economist at Doug Casey's Casey Research advisory.

From my point of view, our nation's deficits and debt are growing at an alarming rate and need to be cut back. The reason these laws were enacted was to offer markets some hope that we would eventually work toward eliminating our serious deficits.

But the prevailing opinion that such drastic decreases in our deficit would slow our economy and bring recession created the impression that this "cliff" must be avoided.

The chart below indicates the size of our federal government's budget deficit. The blue bars reflect what would have happened if there were no legislative changes, and the harsh measures of tax increases and spending cuts occurred. The red bars reflects potential tax increases, the green spending cuts, and the purple is additional interest paid on the expanded debt as a result of bigger deficits. The cliff is seen in the rapid drop of the deficit in the first few years of the blue bars. 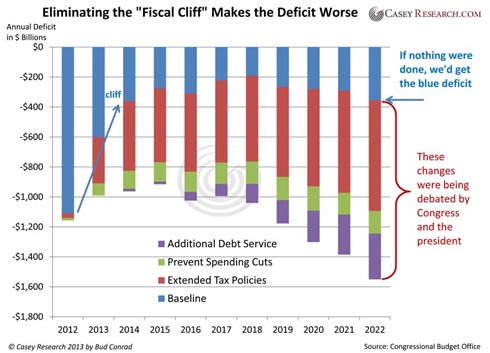 The result so far is that tax cuts have been extended for families making less than $450,000 per year (for individuals, it's $400,000). Spending cuts have been delayed for two months, and the debt ceiling will have to be raised at that time. Compared to last year's structure, the main result is a relatively modest increase of $650 billion in taxes on the rich.

Spreading this over 10 years means that the budget is roughly $65 billion less per year because of the higher taxes. In essence, after all the political discussion and finger-pointing, the politicians did what I expected: they kicked the can down the road and made very little change compared to last year.

The next chart shows the same baseline blue bars with the rather large extension of Bush-era tax cuts to the lower-income households, plus some small additional spending items. Since the blue baseline includes the expectation of sequestering of spending, it is my expectation that the actual deficits could be higher when no cuts are made with some future exercise of government can-kicking. While this chart appears to have lower deficits than shown in the previous range of possible outcomes, the more accurate conclusion is that we are still facing huge deficits, and the politicians really achieved very little in managing our long-term deficit problem. When they get back to meddling, the final deficits could be a lot worse than this analysis.

After the markets closed on Friday, January 3 (when we were less likely to be watching), the Congressional Budget Office released an updated calculation on the size of the cost of the new legislation: it is now $600 billion worse than discussed. They left out the accounting for paying interest on the increased debt for the period of the calculation. I've included the interest-rate cost in the chart below where I estimated it as being larger in the later years of the chart. $600 billion turns out to be only a modest addition. It will turn out to be higher when rates rise. 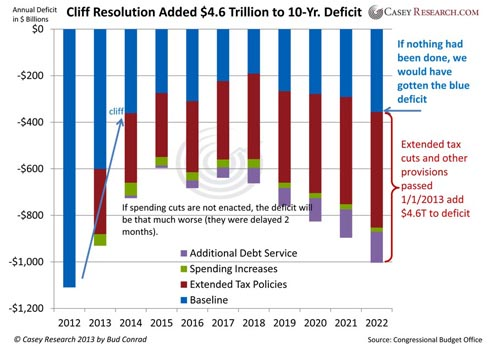 Here are a few more details on what was decided:

It is also sad to report that Washington has been operating as business as usual, including extending many strange programs like support for NASCAR racetracks, rum import duties, and even special support for buildings in New York City near the World Trade Center.

While deplorable, these items are small in the macro picture. One new emergency-spending measure that was not included is $60 billion for hurricane Sandy relief, which will surely be added to the deficit soon. The beat goes on, with the inevitable result that the deficit continues. Fiat currency systems have no built-in limit.

World markets applauded this relatively modest package, because it confirms the short-term positive results of government deficit spending. The Dow Jones Industrial Average was up 300 points the day after the crisis was "eliminated." That means that the Federal Reserve will back up the federal government with more QE to keep the government rolling for the time being.

Another result should be further downgrading of the US government debt by the rating agencies. Can you see a progression over another cliff? Downgrading raises the interest rate required by investors on US Treasuries; that increases the cost and the deficit. See the purple in the above chart? It will get worse than the CBO is letting on when rates rise.

I had been trying to ignore the massive, blanketed coverage by our media of this political circus. I knew ahead of time what the result would be from this deficit-cliff exercise. When it comes to holding the line against more government deficits, spending, and taxing, our government is dysfunctional. This event is more seminal than the results indicate: we can expect the politicians to repeat this process in a couple of months, and so on until there is a major loss of confidence in the Dollar. There will be no return to fiscal responsibility.

My point is simply this: we are already beyond the point of ever returning to a sensible, balanced-budget system. We may be distracted by wars, some crazy or false-flag terrorist event, or by even a natural disaster, but the conclusion is already inevitable: The US Dollar will be toast; Treasuries are a dangerous investment; interest rates will start rising; and even the massive Federal Reserve manipulation supported by the banking cartels will be unable to overcome that. We will likely start in a slow fashion this year and will escalate out of control in the decade ahead.

We need to understand the implications of this recent event, and – as this small step confirms – that promises of future fixes will be complete shams. Remember when President Johnson said that there would be no repercussions from removing Silver Bullion coins from our currency? A silver quarter alone is now worth around $5.50. And that's not because silver is different; it's because Dollars are heading into the toilet. Protect yourself!

In the long run, the fiscal-cliff deal should not be celebrated as if it were a positive event. It is far from balanced, considering the much bigger government-debt problems that we face as a nation. In essence, this action was an opportunity to take real measures to curb our deficits, but the action taken has drifted us further along the path of fiscal irresponsibility.

The American debt crisis has been generations in the making, and so won't be quickly turned around. But that doesn't mean that profit opportunities don't exist – quite the contrary. New regulations and laws always create dislocations that early actors can take advantage of. Learn more about the crisis, and get Casey Research's ideas for how to start positioning yourself, here today.