END_OF_DOCUMENT_TOKEN_TO_BE_REPLACED

How to collapse the gold price? Discover a way to stop e-printing money to inflation destruction...
WELL, well, gasps Adrian Ash at BullionVault.
Like me, the world and all its hedge-fund managers thought the US Fed would start trimming QE money-printing Wednesday.
US Treasury bonds were down, stocks were soft, and gold and silver were long set for a cut to the money-creation scheme, too.
The Fed seemed determined. Ben Bernanke said as much in June. But no.
"The unemployment rate remains elevated," said its long-awaited September statement, a point repeated by Fed chief Ben Bernanke in his press conference half an hour later.
By then, the US stock market had already leapt to new all-time highs.
"Mortgage rates have risen further," the Fed went on, "and fiscal policy is restraining economic growth. Inflation has been running below the Committee's longer-run objective."
And with that inflation objective at 2.0%, the Fed chief's not kidding. Slipping to 1.3% this summer, the half-decade rate of annual CPI is now less than half its 20-year average. It's below one-third its average pace of the last 60 years.
You can spell "deflation", right? 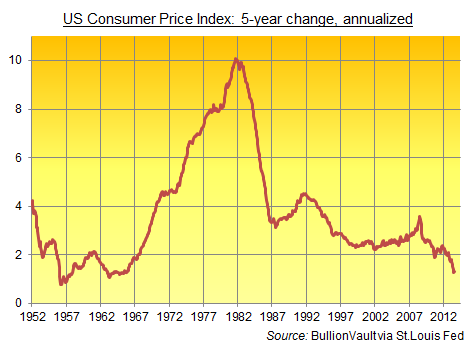 Better keep running the printing press then, and keep running it at $85bn per month. Or rather, as Bernanke first explained in this infamous 2002 speech, keep running its "electronic equivalent".
How does it work? Back in 2002, as the academic and then Fed-governor said, gold was selling for $300 per ounce. Imagine, he invited his audience, that a modern alchemist found a way to create it. "The price of gold would collapse immediately after the announcement."
Fast forward 11 years, and the Fed chairman's own announcement this week saw the price of the Dollar collapse immediately. Because as the deflation-fighter said in 2002, "US dollars, like gold, have value only to the extent that they are strictly limited in supply."
Unlike gold, however, the Dollar doesn't need alchemy to create it. Just a printing press, "or its electronic equivalent." Plus someone to run it. There's no way deflation can kick in, with prices actually falling, if the Fed chooses to wield this ultimate power over the value of money. Quality is destroyed by quantity. Inflation is certain.
Yet whilst we're all waiting, deflation has ticked closer again. Making more money printing the only possible reply from the Fed.
Fact is, the end of QE should be cheered by savers in precious metals. Because when (if ever) tapering does arrive, and finally kills money printing sometime (if ever) in the next couple of years, we can all get back to earning a decent return from money which isn't being printed into destruction by the Fed's e-alchemist team. But while the exit, even before it actually starts (if ever), is proving painful for us bugs in silver and gold investment, it's also creating havoc for more trusting souls in bonds, stocks and other less political assets as well.
Just what does this week's flip-flopping do to the Fed's credibility in the markets, let alone with savers who might trust it to one day raise interest rates from zero? Bernanke is set to stand aside next January. His likely successor in 2014, Janet Yellen, is still louder in her calls for low rates and money printing. But flip-flop again! What if economists, traders and gold-bug pundits have called her wrong too? We all made a "botched projection on Fed tapering" reckon the professional snarksters at Breakout for Finance Yahoo. And just maybe, some other curious minds are asking, Ben Bernanke actually held off so that Yellen can be first the taper – confounding market expectations that she's such a huge dove on inflation and low rates, she'll make the arch-money printer himself look like a buzzard.
Perhaps. Like St.Louis Fed president Bullard said today – helping reverse the last of silver's 9.5% jump of less than two days ago, with surely a new record for Fed indecision inside 48 hours – "Fed officials will argue that they never told the market that it was likely to be September, and that the data has always been the key," as Standard Bank currency strategist Steven Barrow writes.
"But the surge in yields since Bernanke's speech in May," says Barrow, "when he first forewarned the market about tapering, should have alerted the Fed to the extreme sensitivity of the market.  [It also showed] that playing around with the market's emotions, by not tapering when the market anticipated fewer bond buys, risks damaging the Fed's credibility."
Certain big-name pundit economists have long called for credible recklessness from the Federal Reserve. They're pretty much got it to date, as well. But now the recklessness is getting incredible, however. Gold and silver investors especially should gird up for more volatile days, weeks and months ahead. Investors without precious metals might want to get ready for success at last in Ben Bernanke's long anti-deflation campaign as well.
Clearly it's going to take more money printing though from Janet Yellen first.