END_OF_DOCUMENT_TOKEN_TO_BE_REPLACED

Today's welfare-state obligations are simply too big to be paid...

The EUROZONE'S PROBLEM? Its history, of course...precisely what the single currency was supposed to neuter.

But thanks to history – and the very same history that built the Euro, as well – Germany cannot inflate. The rest of Europe, however, cannot do anything else. Sharing one printing press was always unwise. Now it makes UK prime minister Gordon Brown look smart for staying outside. Which really is saying something.

No "single currency" could ever reconcile history, however, because Europe's monetary politics over the last 100 years is cleft right in two. Germany suffered first hyper-inflation...and then madness...before banishing the shame of cattle-trucks packed full of people by promising "Never again!" to wheelbarrows overflowing with bank-notes.

The rest of Europe, in contrast, and especially the PIGS of the south (but also Great Britain, you'll note), got things the other way round. Deflation came first, thanks to the interwar Gold Standard. Victory in Europe was then followed by the victory of soft money. Time and again, devaluation worked magic to rescue over-spent nations from ever settling their debts.

So, where Germans look back and see catastrophic inflation...followed by the sins of the Führer...and finally a five-decade boom built on sound money (not to mention cream-laden lunches)...Greek, Spanish and Italian civil servants fondly recall an insane scramble for cash, only redeemed – repeatedly, and for the next 50 years – by default through debasement.

The hyper-inflation of 1919-1923 is scorched onto Germany's collective conscience and Germany's alone. To the west of the Rhine and everywhere south of the Alps, a very different 20th century applies. Their only memory of tight money was the disaster of the Great Depression. Sparred hyper-inflation in the 1920s, Europe outside of Deutschland slipped instead into chronic deflation the following decade. Come 1931, the world's monetary anchor – the international gold-exchange standard – was cut loose from the Pound, forcing everyone else to do the same sooner or later.

Sooner was better, as well. Inflation worked. So did the war. Just ask Paul Krugman or Ben Bernanke. 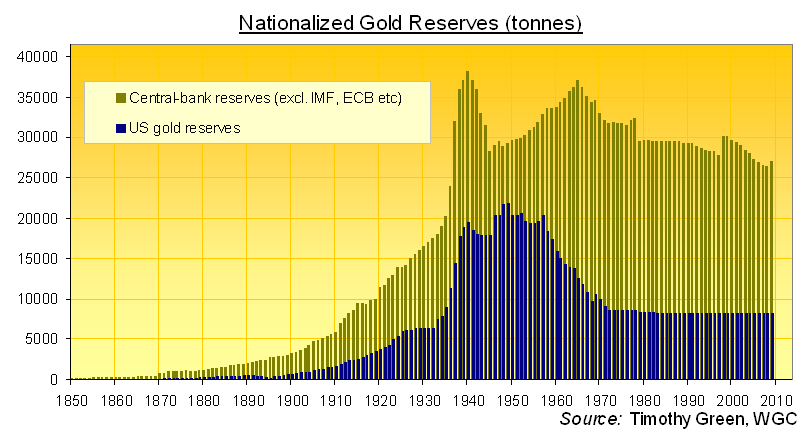 "You owe us €70 billion for the ruins you left behind," spits the mayor of Athens, Nikitas Kaklamanis.

Germany should cough up, in short, for the sins of the Führer. Which is kind of correct, since Hitler's greatest achievement today is a welfare state that neither the Allies or Axis could ever afford.

Compare and contrast with the crushing demands made after WWI. Denied a knock-out blow on the battlefield, the French and British sought victory at Versailles instead...squeezing the Hun for more money than yet existed in the form of gold bullion. Whereas today, "Greek civil servants are suffering because of a crisis they didn't cause," reports the BBC. Only they did cause it, of course – or rather, their parents did...like everyone else who survived or was born after WWII...by voting themselves a cradle-to-gravy-train welfare state that hasn't stopped paying ever since.

The irony of Greek civil servants demanding 16 months' wages each year from German taxpayers this runs deeper than it seems at first glance. The inevitable response by central banks takes us straight back to Weimar, as well.

"What might therefore take place in the long term?" asks French economist Patrick Artus at Natixis of the single Eurozone project. The options he sets out are nigh-on impossible:

Option 1 would force that political union which Helmut Kohl first sought, but the rest of Europe refused to accept. A pan-Eurozone council would hardly help German politicians cool tabloid demands to reinstate the Deutsche Mark, either.

Option 2 is also too ugly to bear, since ignoring the growth-gap only prolongs and worsens the anger, delaying the catastrophe that is Option 3. Watching the Eurozone project – the end of history, no less, for the people who built it – collapse into social unrest inside Western Europe would be just too ironic at best. It might end six decades of peace at worst.

So what about Option 4 – which Artus ignores – by re-opening Germany's print-shop in Frankfurt?

To date, the plan for bailing out Greece, and thus preserving the Euro, means giving Athens enough money to save it asking the markets for funding until 2014. That sum, so far, is put somewhere near €120bn. But to date, Greece's Eurozone partners have offered up diddly squat. Italy and Spain, in particular, have gone very quiet.

Wheeling out the printing press in Frankfurt, however...and getting the European Central Bank to do precisely what Havenstein did in 1920...means Europe can pay its pensioners the same way the Weimar Republic tried to pay Britain and France after Versailles, and with the same inevitable outcome, as well.

Just like British and French pride in 1919, today's heroic welfare promises are just too expensive. Whether sooner or later...and with or without a hyperinflation to try and pay off the victorious pensioners and civil servants...these costs from the past cannot be paid from tomorrow's money. They're simply too big.