END_OF_DOCUMENT_TOKEN_TO_BE_REPLACED

JUST LIKE INFLATION, money itself is always and everywhere a political phenomenon, and nowhere more clearly than Germany, writes Adrian Ash of BullionVault.

Hitler's first coup attempt, the Munich Beer Hall putsch, came during social chaos of late-1923's Weimar inflation. His 1,000-year Reich (lasting barely a decade) then brought fresh monetary nightmares to life, not least the Lagergeld coupons issued to concentration camp slaves. Amid fresh hyper-inflation fears and the cigarettes-and-stockings barter economy of mid-1948, the Cold War then got started when Ludwig Erhard, then Director of Economics for the occupied zones, launched the Deutsche Mark one Sunday, both wrong-footing the Allies (whose officials, naturally, were enjoying a day at home) and so enraging the Soviets that they blockaded West Berlin. And even today, senior Bundestag policymakers argue in public over how far European monetary union was a French pre-condition for accepting East and West German reunification in 1989.

"I cannot believe that will happen. It is inconceivable," says Eichengreen. But that just shows a lack of imagination. So do a host of Eurozone officials. German households, in contrast, know their history.

The German public has long thought the Euro project might unravel, still holding onto some 13 billion physical Deutsche Marks today – equal to nearly 1% of the 16-nation Eurozone's entire notes and coins now in circulation – despite being able to exchange them at any time in the last decade for full Euro-value. 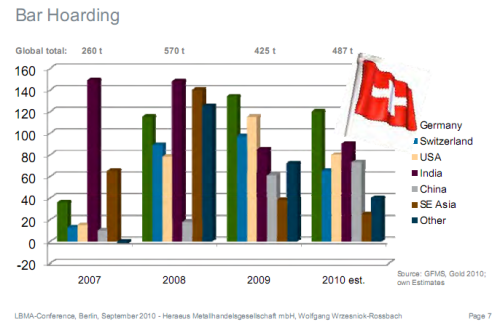 As you can see, Germany (in green) was and remains the developed-world's No.1 gold bar market. (The Swiss flag also indicates how a large but unknowable chunk of Swiss demand for gold bars in fact comes from Germany, where savers want to hold the metal outside the Eurozone – as they can, for instance, at very low cost using Bullion Vault...)

Nor does the United States hold the monopoly on those "swivel-eyed gold bugs" of popular journalistic imagination, either. Citing the discussion boards at HartGeld.com, finance daily FAZ says that German conspiracy theories are getting "chronically overheated online"...primarily because they keep predicting "Apocalypse" for the Euro. But this week's new Euro-price records in gold point to something, and something awful we guess, for this most fiat of fiat currencies. 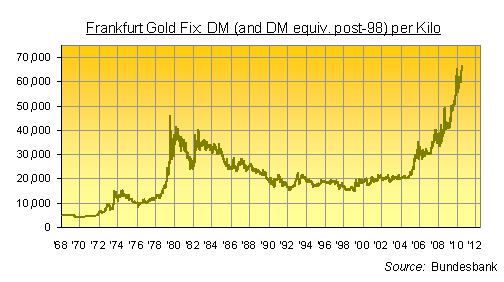 At a minimum, the trebling of gold prices from Germany's long stable valuation around €10,000 per kilo (or rather, DM20,000) throws the Euro's "stability pact" into sharp relief yet again. And you don't need to be Jude Wanniski or Alan Greenspan (pre-1996) to wonder if the price of gold – used as money for 5,000 years straight – might hold a high information-content regarding the value of what Europeans have come to call money in just the last decade.

Right from the get-go, in fact, the "ghost of the Mark" (as Nobel-winning economist and 'father of the Euro' himself Robert Mundell called it) saw the Euro's strict rules – learnt and applied during 50 years of Teutonic discipline – over-run at every turn.

Monetary systems can and do break down, and the ties of cross-border trade cannot guarantee a currency pact which 15 out of its 16 members have breached. No two countries with a McDonald's franchise ever went to war with each other until they did in the Balkans in 1991, and as the last of the Euro's tattered rules are torn up, why should the legal "impossibility" of secession alone be observed?

The likely chaos to follow, of course, is focusing the technocrats' minds as never before. Barry Eichengreen's own warning – of huge and damaging transfer costs, plus a capital flight from the weaker states forcing any new German currency upwards and thus hurting its exports – makes a compelling case for giving the Euro what it's always lacked:

A single sovereign government to back the single currency.

Hell, Aristotle and Plato knew that money is ordained by the sovereign, as did monetary historian Alexander Del Mar 24 centuries later. But the rush to federalize now underway – the "last battle" lampooned by HartGeld.com on Thursday with a photo of Hitler reviewing his pre-teenage troops in Berlin, May 1945...and challenged by such "swivel-eyed" skeptics as the UK's Nigel Farage (he did use to be a London metals trader, after all!) – seeks to create a sovereign in the image of its money, not stamp the latter with the former. Its aim is a super-state willing, eager and able to print Europe out of its debts.

Which would, of course, take us straight back to Weimar.