END_OF_DOCUMENT_TOKEN_TO_BE_REPLACED

The Dow-Gold Ratio of US stocks priced in gold just got to its cheapest level since Jan. 1995...

YOU MIGHT CARE to know, if you put any store by such yard-sticks, that the US stock market just sank to a 14-year low against gold.

With the Dow Jones Industrial Average dipping below 9,000 last week, the price of gold held near $850 an ounce – at least until last Thursday's AM Gold Fix in London. (It's since lost $120; more on that in a moment.)

So the Dow/Gold Ratio – which simply divides the one by the other, thus pricing the DJIA in ounces of gold – fell to a little above ten, making the 30 stocks of the Dow cheaper in Gold Bullion terms than at any time since January 1995.

Y'know, like the Tech Stock Bubble and Reflation Rally were merely a dream Alan Greenspan had after eating wild mushrooms and blue cheese right before bedtime. 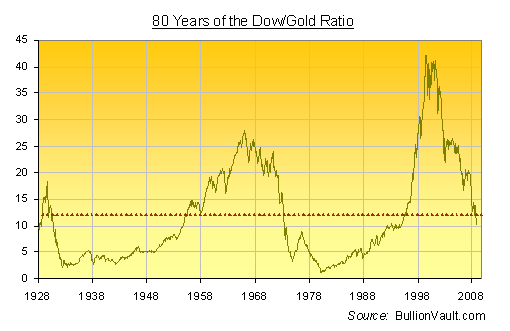 The Dow has sunk back below 9,000 again today (Weds 22nd), while gold has lost 13% of its value in US Dollars since hitting that new 14-year high in terms of investment assets last week.

So in the big scheme of things, where the big money is made, what might this price – which took 22 years to recover last time it slipped beneath its 80-year average (marked in red on our chart; the Dow priced in gold stayed sub-par for 25 years after the 1929 crash) – now mean for US stocks and Bullion? Does the Dow, as a proxy for corporate America, now offer a bargain buying opportunity?

"Things have just gotten a bit silly," reckons Chris Orndorff, co-manager of $50 billion in assets at Payden & Rygel Investment Management in L.A. "We are very, very close to a bottom in equities."

Plenty of other smart, successful and battle-hardened investors think so, as well. But these wise old men all believe US stocks are a bargain for other reasons entirely outside of the Dow/Gold Ratio.

Jeremy Grantham, for instance – chairman of the $120bn GMO funds – points to the mantra "stocks for the long run" used by all financial advisors, good and bad.

"The early purchases will be painful," Grantham's quoted by Reuters. "But if you could slice in and do some buying before and after the low, seven years from now you will not regret it."

The granddaddy of home-spun investment wisdom – Warren Buffett himself – thinks that, because the vast majority of investors are trying to quit stocks, you should "Buy American. I Am" as he titled his New York Times piece last Friday.

"A simple rule dictates my buying," said the Sage of Omaha, like he was fishing for a "Boo-Ya!" from the Berkshire Hathaway crowd: "Be fearful when others are greedy and be greedy when others are fearful. Most certainly, fear is now widespread."

It would be churlish to argue with these giants of stock-market success. So step forward the churls here at BullionVault, ready to mix you a snowball of Devil's Advocaat with a maraschino cherry on top...

#1. Fear & Greed
The Dow/Gold Ratio's most fearsome decline came between Apr. 1971 and Dec. '74. Inside those 44 months, the Dow lost seven-eighths of its gold value.

During that period, of course, the Gold Price was cut free from the US Treasury's official price of $35 an ounce. US stocks, in contrast, lost one-third of their Dollar price as earnings collapsed in the face of the first global oil crisis.

Fear replaced greed almost entirely on Wall Street, giving brave investors a fantastic chance to buy cheap at the bottom. But for longer-term wealth protection, it proved something of a false start. The Dow might have sunk from almost 25 ounces of gold to just 3.5 ounces. It might then have doubled its gold-bullion value inside 22 months. But the US stock market then sank again – and sank sharply – down to barely one ounce of gold by the start of 1980.

That marked the bottom...just as Ronald Reagan picked out new drapes at the White House.

#2. "But the Dow Doesn't Represent US Business Today..."
Too true – and nor does the Nasdaq, despite what you may have heard (or believed) at the top of the tech-stock bull market in March 2000.

Turning then to the S&P 500 – that broad-based index of US stocks – America Inc. rose 32-fold against gold between its record low of Feb. 1980 and the big top hit in summer 2000. The S&P index has since dropped three-quarters of that peak value in Gold Bullion.

Quite where that ratio's headed is unclear today; both gold and Wall Street keep selling lower as the deflation in credit destroys Leverage & Debt in all financial markets. But the outlook for corporate earnings – let alone investment flows – is ugly. Very.

"It's always darkest before it's pitch black," said Eric Upin, a partner at Sequoia Capital – the venture capitalist group which launched Apple, Oracle and YouTube – at a recent "all-hands meeting" attended by some 100 corporate bosses.

"Survival of this storm means drastic measures must be taken now," he went on, "so you will have the opportunity to capitalize on this down turn in the future."

Upin used to run Stanford University's $26-billion endowment fund, so you've got to wonder where he'd put that money today – if anywhere – outside of Treasury bonds. Sequoia's presentation (available here) is worth reviewing if you had any doubts that capital expenditure and corporate growth are being slashed.

It points to a "tremendous amount of capacity build up" worldwide (slide 17), with fixed investment rising above 22% of global GDP since late 2005. Last year's earning forecasts for the S&P constituents, Sequoia notes, have come in some 18% over-optimistic. And at the worst of the early '90s and 2001 recession, that 12-month disappointment reached above 25%.

But what if recession slips into depression – the very thing Ben Bernanke was hired at the Fed to prevent?

#3. The Value of Stocks vs. the Value of Money
Amid such an historic collapse in the Dollar-price of all assets, studying history to inform your thinking seems at least wise. So let's check what happened to stocks priced-in-gold the last time America sank into deflation.

As credit evaporated (check) and the stock-market sank (check), millions of savers were wiped out (check) while commercial banks failed (a half-check for Lehmans). The only thing to go up was the value of money (check once again, as commodities slump alongside non-US currencies, and retailers run out of exclamation marks to add to their "Sale!" signs).

Back in the early Thirties, however, gold was in fact money, rather than another class of investment entirely. So the Dow's 89% loss was matched exactly by the drop in Dow/Gold. So were its gains when the market picked up, doubled the Dow, in spring '33.

But then President Roosevelt stepped in, banning private gold ownership and slashing the Dollar's gold value. For those US investors who clung onto their gold (say, by owning it offshore, safe from the Treasury's $10,000 fine or threat of imprisonment), Roosevelt's move instantly knocked the Dow/Gold Ratio lower, undoing 12 months of stock market gains and making the Dow 40% cheaper for gold owners wanting to switch into shares at rock-bottom prices.

Might the next US president now do the same for stock prices-in-gold when he takes office on Jan. 20th? Won't Ben Bernanke be standing ready to help the Dow find its floor...by destroying the Dollar (again) to stop it from rising?