END_OF_DOCUMENT_TOKEN_TO_BE_REPLACED

Where-oh-where might the UK find enough money to reverse this deflation...?

SO AT LEAST we know now that the Bank of England isn't front-running its personal accounts or pension scheme with inside information, writes Adrian Ash at BullionVault.

Because the Old Lady isn't even front-running her own data before she speaks in public...

"The unprecedented actions of the Monetary Policy Committee to inject £200 billion directly into the economy – described by some as 'quantitative easing' – have averted a potentially disastrous monetary squeeze," said governor Mervyn King in a speech on Tuesday. 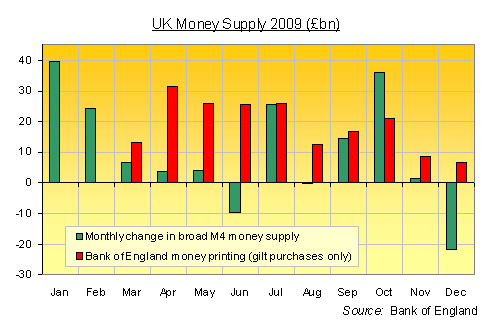 December '09 saw the broad money supply in the UK – known as M4, and encompassing all private UK holdings of Sterling notes & coins, all Sterling deposits held at mainland banks & building societies, and all certificates of deposit, commercial paper & debt securities issued by UK banks and building societies of up to 5 years' maturity – shrink at the fastest pace on record.

Down by almost £22 billion, this deflation (technically defined as a contraction in the money supply, rather than a drop in shop prices as the press seems to think) came even as the Bank of England created £6.8bn from thin air, and spent it on government bonds in its bid to inflate our way out of recession, "easing with quantity".

One month's data, of course, doesn't need to mean much (or so Mervyn King says). The December figures are still "provisional", and the net loss of money is nothing, as yet, to the money deflation of 25% that hit the United States during the Great Depression. Indeed, it only just beats, on a monthly basis, the drop in M4 of autumn 1997. And the data available only runs back to 1963 – so titling this piece he "worst deflation on record" is tabloid, we confess. But then, so is The Times.

Furthermore, a good chunk of that "injection" from Threadneedle's electronic equivalent of the printing-press no doubt went to foreign gilt-owners, looking to quit UK government debt and finding a ready buyer in the Bank of England. The quantitative easing surely didn't stay here at home, not without last month's true deflation – absent the Old Lady's ex nihilo cash – standing at 24% rather than 18% of December's entire economic output.

But either way, the Bank's queasing was dwarfed by the volume of money which quit the UK last month. And whether this Christmas's net withdrawal of cash went east to pay for Chinese toys...or north to pay for Norwegian spruce...a far greater tide of money will continue to ebb out of the UK over the coming weeks, months and years, we guess here at BullionVault, as the world's most indebted nation is forced to settle a much larger bill.

The £647 billion – more than 45% of annual GDP – currently owed by private households and business which doesn't actually exist here at home. 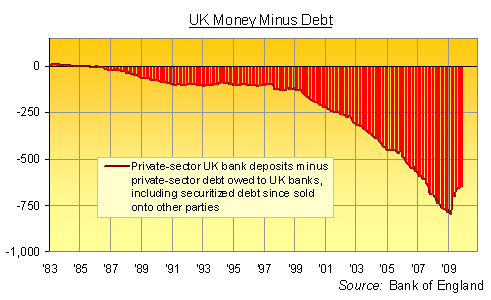 You see, it wasn't only Northern Rock that used the international money markets and foreign investment fund buyers to finance its runaway lending in the "boom" of 1997-2007.

As our chart shows, UK banks somehow lent private borrowers £803 billion more than they held in customer deposits by the spring of 2009. And this excess of debt over money – what the Bank of England has cheerfully called a "funding gap" – was plugged in good part by foreign creditors.

This in itself was not new. The kindness of strangers first stepped in to help giddy-up the Lawson Boom of the mid-to-late '80s. But settling around £100bn as the housing crash of 1989-1995 then struck, their cumulative largesse peaked below 25% of GDP...a sizeable chunk, but not enough to flee back overseas when that particular bubble went bust.

Whereas in the first decade of the 21st century, in contrast, Tokyo pension funds, Manhattan investment banks and other third-party creditors from around the world wound up owning Tyneside buy-to-let debt and Bluewater credit-card bills worth 56% of GDP at the top, half of it held as securitized bonds. 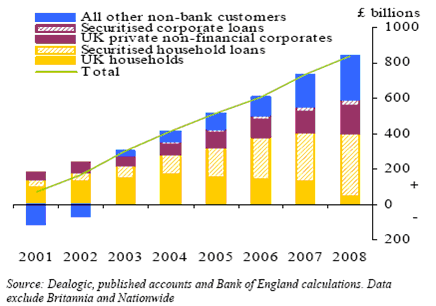 "[The] banks have come to rely heavily upon wholesale funding, rather than deposits from customers," noted Professor David Miles, the latest career academic to join the Old Lady's policy team, in a speech of Sept. '09.

But "a substantial part of this wholesale funding proved footloose and hard to replace once fears about the strength of the banking sector emerged," as Miles said – and as Northern Rock proved all too clearly.

In the last 8 months of its private existence, Northern Rock's total net lending rose 43% from the same period a year before. New residential home loans were 55% greater – not that shareholders bothered to question how or why until the thing toppled over and the board begged the Bank of England for help. What the Financial Times called "an alternative banking model" was applied in extremis at New Labour's favorite ex-mutual. Northern Rock got 43% of its funding from the wholesale debt securitization market, parceling up mortgages and credit-card debts to sell onto pension and insurance funds, foreign banks and overseas governments.

That compared with the UK bank average of 7%, according to the FT. Based on the Bank of England's own data, however, securitization accounted for 10% of all UK bank lending outstanding by the time Northern became Narodny Rock. It peaked at 12% by late winter 2008/09, and stands above 9% today. Overall, the "funding gap" peaked at 30% of the UK's entire bank-loan book, only reducing to 24% today. Meaning that almost £1 in every £4 owed by private households and business first came not from the bank savings of other households and business, but from those "alternative" sources which have turned "footloose and hard to replace" now the global credit boom's croaked.

Who can redeem, or even merely refinance, this outstanding net debt? As it is – and as it has been for the last 25 years, in fact – the UK couldn't settle its obligations today, not even if every saver agreed to give up their cash. Because the total volume of debt is greater by almost one-third than the actual volume of Sterling currently held here in Britain. Even excluding the government's fast-swelling debts, the UK economy now owes more cash than exists inside it.

Yes, we've been constantly in hock since Dec. 1984. But that doesn't mean we can bear any size of net debt – and as the money leaks out...going overseas to repay what once seemed the kindness of strangers...UK deflation at home is guaranteed. Unless we can find a new, happy-to-keep-flowing source of money from nowhere, that is.

Still expect the Bank of England to stop quantitative easing on schedule next month...?