END_OF_DOCUMENT_TOKEN_TO_BE_REPLACED

World markets have taken another battering this week. What's causing it...?

IT HAS BEEN another hectic week for world markets. Gold Prices have been hammered – and Silver Prices have had it even worse, writes Ben Traynor at BullionVault.

Stocks and commodities have also suffered – while US Treasury bonds have had to put up with Ben Bernanke 'Twisting' them.

The real story, however, is not about gold and silver...or stocks for that matter. The real story features two lead characters: debt and growth. The world economy has too much of the former, and not enough of the latter to pay it off with.

Four news stories – all of which appeared on Friday 23 September – provide a worrying snapshot of where we are in this crisis:

So far in this crisis, governments and central banks have managed to stave off a depression. They've done so by undertaking extraordinary measures – record low interest rates, quantitative easing, buying up toxic assets, nationalizing banks, guaranteeing bank deposits etc. The aim was to ward off a debt-deflation spiral and a banking crisis.

We had a recession, and some banks have failed, but the great systemic financial and economic crash has not materialized. Yet.

Policymakers avoided catastrophe in 2008 by transferring private sector debt to the public sector. Some of this was done directly – buying stakes in banks or relieving them of their toxic assets, for example. Other methods were (marginally) more subtle, such as stimulus programs aimed at stirring up some activity in the economic petri dish.

Of course, we all know the governments that undertook these policies didn't just have the money for them lying around. And with recession looming they were hardly likely to raise it from taxation. So, in time-honored fashion, they borrowed it – spending tomorrow's wealth today. In this way, the proceeds of future growth were appropriated for the needs of the present – while the liability for current debt was pushed into the future: 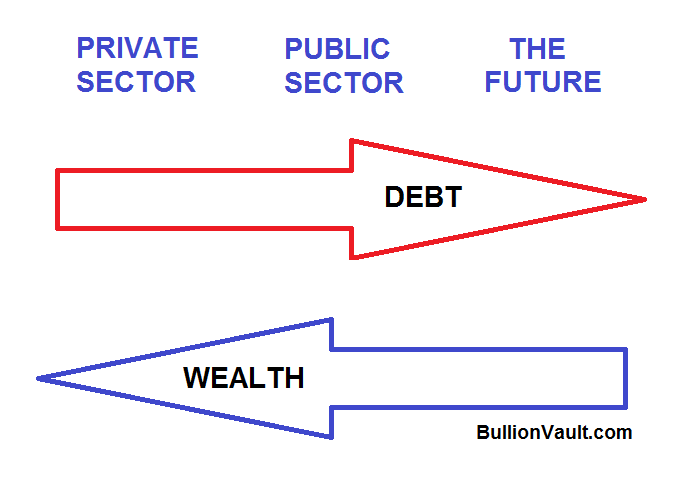 The solutions policymakers came up with amounted to a two-way debt-wealth transfer mechanism. For this to work, it relies on their being enough future wealth against which to borrow. In other words, you need sustainable growth. It looks increasingly likely, however, that the world's major economies are heading for severe slowdown – with some heading back into recession.

Take China – a byword for miraculous rates of economic growth. Preliminary figures published by HSBC this week suggest China's manufacturing sector – its economic engine for three decades – contracted this month. Beijing-based economist Michael Pettis argues that China's economy will have to rebalance its economy away from government-directed investment and towards private consumption – a bumpy process that could see growth rates more than halve.

Fears are also mounting that China will have its own subprime crisis in housing, and that a bubble in local government debt is set to burst.

As for the west, the debt crisis in the Eurozone is being very well documented right now (see virtually any newspaper this week for further info, or read BullionVault's own daily market reports).

Of deeper concern, though, is that the Eurozone – along with its economic powerhouse, Germany – also looks to be heading for recession. Preliminary data this week show both the service and manufacturing sectors are slowing in Germany – and contracting in the Eurozone as whole.

Then we have the US, where GDP grew at an annual rate of 1.0% in the second quarter. One of America's great strengths, compared to Europe, may turn out to be its most dangerous flaw. European leaders have been criticized for their slow response to the crisis. The US, as a single nation, has – the debt ceiling nonsense notwithstanding – shown itself able to act a bit more decisively, especially in the final months of 2008.

But swift, decisive action is only an advantage if you're doing the right thing. There's a growing sense that, actually, maybe the people in charge, well, aren't. Even the policymakers themselves don't seem to be sure.

The Bank of England's latest Quarterly Bulletin, which came out this week, contained a paper that looked at how effective quantitative easing has been in Britain. In amongst the various charts and tables are the following cautious paragraphs:

There is considerable uncertainty around the precise magnitude of the impact.

Translation: we don't know if it worked

It is difficult to measure directly the effects of monetary policy measures such as QE and so estimates of those effects are highly uncertain.

Translation: we can't know if it worked

The wider macroeconomic effects of QE are difficult to quantify.

Translation: we don't know what else it might have done

There's nothing inherently wrong with these statements – the Bank's economists are being honest. But these caveats illustrate a fundamental truth about the policy response to this crisis: no one really knows what its effects are.

This is something the Federal Reserve noted this week, when on Wednesday it announced its Operation Twist policy – and announcement that was followed by two days of market turmoil:

The maturity extension program will provide additional stimulus to support the economic recovery but the effect is difficult to estimate precisely.

It's difficult to predict because there's a very realistic chance it won't do anything at all for the economy. Growth could therefore stay mired at 'stall speed' – or even slip into reverse.

Without growth, the debt-wealth transfer mechanism breaks down: 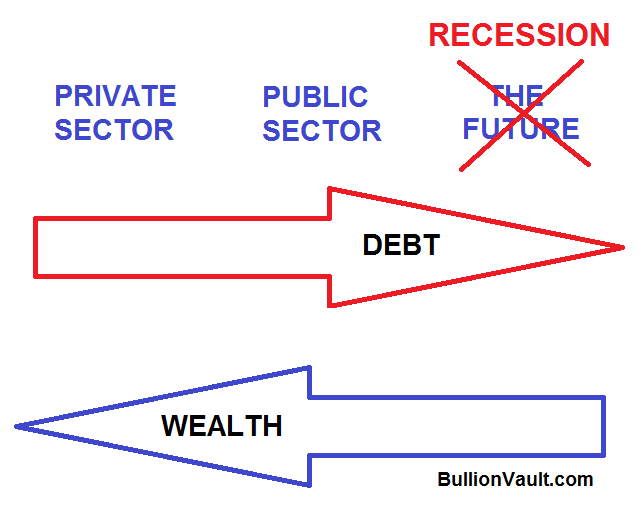 This, in fact, is what we're seeing right now – and why the markets have had such a torrid time lately. We are watching a patched-together, hastily constructed machine fall apart in front of our eyes.

What will happen next? How will policymakers deal with debt if they can't rely on growth? And how might gold owners respond to all this turmoil? Find out more in Part Two...