END_OF_DOCUMENT_TOKEN_TO_BE_REPLACED

WHAT'S UP in China? asks Adrian Ash at BullionVault.

China matters for Gold Bullion prices as much as it does for oil, copper, cement, steel, soya and all the other raw materials now finding their world #1 or #2 buyer in the shape of the middle kingdom. But in the world's fastest-growing large economy, "growth has [now] replaced inflation as Beijing's top policy concern," says Qu Hongbin at HSBC in Hong Kong.

The bank's co-head of Asian economics now forecasts another three cuts to China's banking reserve requirements by July, inviting lenders to keep back less of the money they take in deposits and so boost growth in credit.

"There is developing in Beijing, I think, almost a panic about global economic prospects and the impact of the European crisis on China," agrees Michael Pettis, finance professor at Peking University, going further still and forecasting debate – if not the fact – of a currency devaluation in 2012.

Yes, you read that right. In a US election year, Beijing's policy wonks are arguing over cutting the Yuan's foreign exchange value, not raising it.

Fair enough – basic economic theory says the flood of new currency, let alone the tidal wave of credit creation, should see the currency fall. New bank loans were pegged at the equivalent of $1.2 trillion in 2011, with the 2012 target raised another 7%. Total money supply is set for a 14% rise under Beijing's latest plans, aimed at perpetuating its near double-digit annual economic growth.

China's stellar domestic growth, however, has of course been driven by exporting cheap goods to the rest of the world since it joined the World Trade Organization a decade ago. And to gee things along, the People's Bank of course keeps the Yuan (aka Renmimbi) closely pegged to the Dollar – ensuring that devaluation by the US Fed can't price Chinese goods out of the market.

"Within China," Pettis now believes, "many are going to argue that the rapid decline in the trade surplus, coupled with unmistakable evidence of flight capital, means that the PBoC should devalue the RMB."

Rapid decline in the trade surplus? China's pace of export growth fell hard on the latest data, while imports continued to rise. Flight capital? The tide of cash in Renminbi accounts – after clamoring to get in ahead of the currency's widely assumed and hotly politicized rise – just recorded its first back-to-back months of outflows since 2000. Analysts guess it's because the dead-cert of an upwards revaluation is now off the table. Beijing is only encouraging that view.

"Exports are set to slow [in 2012]," said Shen Danyang, a spokesman for the Ministry of Commerce, in mid-December. "We will further accelerate reforms to...make overall trade remain a positive contribution to the economy."

Such reform cannot mean a rise in the Yuan. Not if overall trade is to continue adding to GDP. Which would suggest worsening returns to cash deposits, already lagging the official rate of inflation for 22 months, as a way of dissauding inflows of foreign money but also encouraging domestic savers to spend. Which only further confuses the picture for China's Gold Bullion and jewelry demand, now the second-largest after India, perennial sink of the world for physical gold. 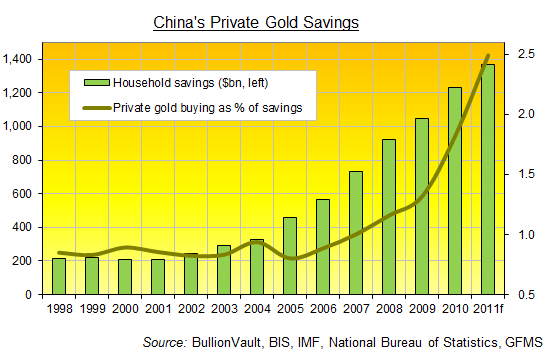 Wednesday brought news that Gold Bullion imports to China through Hong Kong set a fresh monthly record in November of more than 100 tonnes.

That's quite a chunk however you weigh it. China's full-year 2010 imports are estimated to have been some 245 tonnes. Domestic Gold Mining production (now the biggest in the world, and trapped by a ban on gold exports) totaled some 340 tonnes. Already last year, record monthly gold imports from Hong Kong in October had led one analyst, Tom Kendall of Credit Suisse, to forecast total 2011 imports of perhaps 490 tonnes. Double the 2010 total by weight, that would represent a 150% rise in Chinese gold imports by Yuan value, and come on top of the 10% rise in domestic Gold Mining output to 375 tonnes forecast in August by the Ministry of Industry and Information Technology.

Ever-more Chinese wealth, in short, is going to gold, and coupled with households' fear of inflation, this new debate over actively devaluing the currency means Gold Investment demand is only likely to rise again. That would depress China's trade surplus, despite its world-beating mine output. Which given how panicked Beijing is about growth, might perhaps put its friendly policy towards gold at risk.

China began de-regulating Gold Prices and trading in 2002. On best estimates, annual demand by weight trebled over the following decade, even as Renminbi prices did the same. Because allowing private sales of gold (and silver) to boom has enabled China to diversify its national savings (this is still a Communist state, remember) not only out of the Dollar, but also outside equities and over-priced real estate. So as you can see on BullionVault's chart above, the net effect outpaced even the surge in household savings – itself a function of China's galloping GDP growth – to take the proportion of new Chinese wealth stored in gold from a peak of 0.9% in 2004 to perhaps 2.5% in 2011.

No, Chinese households don't love gold quite as much as India gold buyers just yet. India's love of gold saw its 2010 demand equal some 2.6% of GDP – a huge drag on the country's trade balance, since it has no domestic mine output, unlike world #1 China. When global gold prices dropped 20% from their all-time highs in late 2011, the collapse of the Indian Rupee meant the world's heaviest buyers couldn't step up, not even amid the traditionally strong Diwali and wedding-season periods.

No one expects the Renminbi to sink like the Rupee, however. Unwinding China's newly-enabled love of physical gold would be equally disastrous, politically, as well. But is it mere coincidence that, just ahead of the traditionally strong gold buying season of Lunar New Year, Bejing moved to shut down all Gold Trading exchanges other than the officially-recognized Shanghai Gold Exchange and Shangai Futures Exchange?

A neatly controlled and officially approved gold rush has been very welcome to date. Any hint of panic buying, in contrast, might perhaps remind Beijing just a little too much of what's been happening in the neighboring, gold-heavy, inflation-and-falling-currency hit, and equally Communist state of Vietnam.