END_OF_DOCUMENT_TOKEN_TO_BE_REPLACED

So the cheapest money in history played no role in killing the century-long downtrend in commodity prices...?

A LITTLE over three years ago, we published this chart here at BullionVault – now updated so you can see just how much mischief cheap money is causing, writes Adrian Ash at BullionVault. 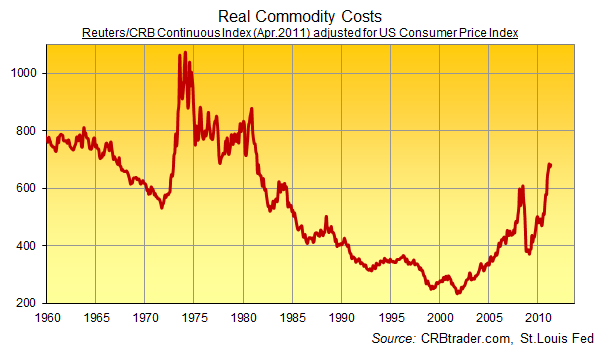 The second-half of the 20th century saw the cost of raw materials fall by almost 75% in real terms. (It's shown on our chart by the 19 most-heavily traded commodities, courtesy of the Reuters/CRB Continuous Index, adjusted by the US consumer-price index.)

This gift to savers and consumers was itself an extension of a trend beginning almost 100 years earlier for Americans (the end of the US Civil War), and some 150 years earlier in Europe (the end of Napoleon). Yes, there'd been a little "blut und eisen" in the meantime. But just as the oil shocks of the 1970s failed to break the long-term, secular trend – despite doubling real prices inside 3 years – so too failed the far bloodier shocks of World Wars I and II... 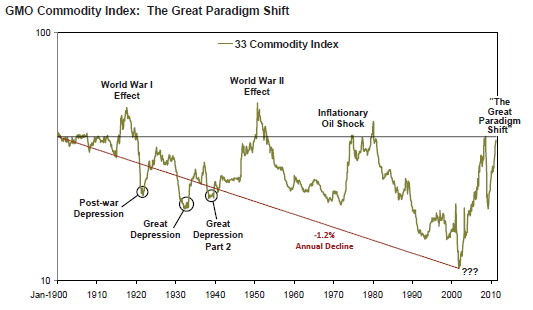 See those question marks at the all-time low? We'll get back to what event they might represent in a second. Because right now, "Mrs. Market is...sending us the Mother of all price signals," says the GMO asset managers' Jeremy Grantham, spotting the same break in trend we noted in Feb. 2008.

Grantham's been watching this signal for longer still, but now puts it very succinctly:

"The prices of all important commodities except oil declined for 100 years until 2002, by an average of 70%. From 2002 until now, this entire decline was erased by a bigger price surge than occurred during World War II."

What to do? As a money-manager, Grantham says he's got short-term trades and investments to recommend, of course. But he also plays politician, urging the United States "and every other country [to get] a longer-term resource plan." Being neither money managers nor politicos here at BullionVault, we're spared both of those urges. Which leaves only the urge to figure out why real commodity prices now stand back at their early 1980s' level. Which means trying to figure out what changed in 2002.

"The Monetary Maniacs may ascribe the entire move to low interest rates," says Grantham. "But commodities are made and bought by serious professionals for whom today’s price is life and death. Realistic supply and demand really is the main influence."

You'll find this same school of "Money? Schmoney!" analysis flexing its intellect in plenty of other arguments right now, too. Rather than ultra-low interest rates knocking the Dollar lower since – hey! – 2002, "There is a global Dollar overhang that is being unwound" by central-bank reserve managers, reckons Pharo Management portfolio manager Mark Dow, writing for Reuters. "The key drivers of inflation [are] oil and commodity prices, factors beyond the Bank of England's control," says UK economist Roger Bootle of Capital Economics and Deloitte. "Questions remain about the capacity of the ECB to find a local solution to a largely global problem," agrees KBC Bank in Brussels. Indeed, and quite apart from "expansionary monetary policy...other factors, such as growth in emerging market economies, are more likely to be the main drivers," according to research by the Federal Reserve Bank of San Francisco.

Besides, "Sharp increases and decreases in commodity prices have had little, if any, impact on core inflation," as the Chicago Fed declared in its own research last month. Which means that "upward pressure on inflation [is only] transitory," as the Fed's rate-setting committee has decided time and again this spring.

No, "The primary cause of this change is...the accelerated size and growth of China," says Jeremy Grantham – concurring with the San Fran Fed – "[plus] its astonishingly high percentage of capital spending, which is over 50% of GDP, a level never before reached by any economy in history, and by a wide margin."

Quite where China got the money from, however, no one says. 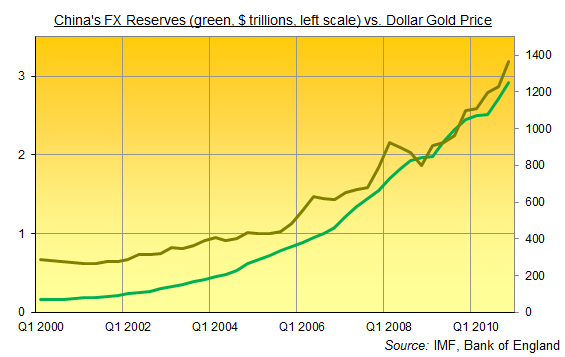 Three trillion dollars is a lot of cash to hoard up in barely 10 years. It's a lot of cash to unleash on the world's commodity markets, too. And "peak oil" or not, we monetary maniacs might just have a point. Real returns to cash do matter.

Doubtless the world really is hitting its straps in terms of natural resources, as GMO's Jeremy Grantham warns. But bringing the scramble forward by handing out ever-more claims upon those scarce resources – and at the lowest nominal interest rates in history – can hardly be blameless.

Get safe gold at low cost with BullionVault...