END_OF_DOCUMENT_TOKEN_TO_BE_REPLACED

How UK households defied the Bank of England's rate-cut ritual...
YOU'VE heard the phrase "Cargo Cult" no doubt, says Adrian Ash at BullionVault.
Japanese and American troops fighting WWII regularly landed food and supplies onto small Pacific islands.
Troops would clear some forest as an airstrip, set up lights to guide the pilots, and then call in the drops or landings by radio.
Local tribes saw all this. So when the troops left after as war ended, they tried to bring in food and supplies by repeating the process...
...making a clearing, lighting small fires on it, and talking into sticks and boxes.
The European Central Bank tried much the same this week, telling a press conference how it is going to print money to fix the economy while holding interest rates at zero or below. Because like all central banks today, it thinks easy money will push people into borrowing and spending, not saving.
But this ceremony has failed to work any magic for the Bank of Japan since it began ZIRP and QE at the start of this century. The world's third-largest single economy remains mired in deflation, with people still saving – not borrowing or spending – 15 years after it started.
The Bank of England has failed abysmally here in the UK since it took rates to 0.5% and started QE precisely 6 years ago too. That's some achievement given the taste which UK households, as a group, had for borrowing and spending back when rates were 10 times this level.
Yet faced with near-zero rates and a surge of monetary inflation since March 2009, UK households have moved to repay debt and save, not borrow more. 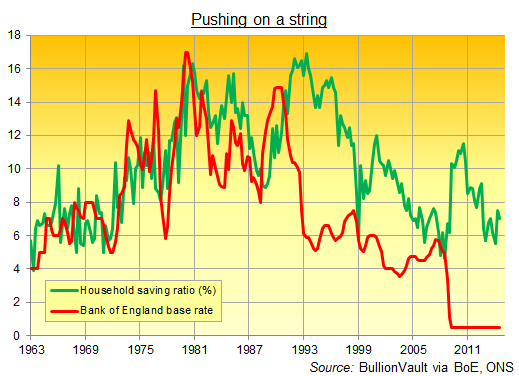 Saving, not spending, is what UK households did when interest rates rose in the 1970s and '80s. So by cutting rates, the logic still runs, the Bank of England would in fact boost spending.
But no. UK households first slashed their bank debts by 10 pence in each Pound, as this second chart shows, and then failed to start raising new loans again. They meantime continued to add to their bank savings, albeit half-as-fast as they did before the global financial crisis. 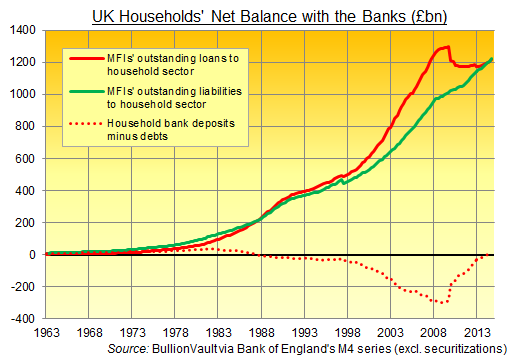 Net result? UK households, when you compare the sector's total bank debts against total bank deposits, now have a net positive balance for the first time since 1988, having hit a £300bn deficit just as the global financial crisis broke.
"Why isn't it working?! Turn that dial, twiddle that knob, pull that lever!"
One big problem for the 'transmission' of zero-rates-and-QE to household spending was the UK regulators' sudden dash to impose tight lending standards after the crash. Stable doors and bolted horses, of course. The Financial Services Authority (RIP) ordered the banks not to lend except to the very safest risks, even as the Monetary Policy Committee tried after 2009 to stuff lenders full of cash they could lend out.
But as the government has also complained of the regulators suddenly finding religion, because lending standards for household borrowers have been easier than those applied to small businesses – another key sector the Bank of England wanted to borrow and spend. So the retreat of UK household debt, and the overall shift to net saving, does reflect a choice not to borrow. A choice which basic central-banking theory says couldn't happen when interest rates were slashed to record lows near zero.
Look, I'm far from the first person to call modern central banking a cargo cult...a make-believe ritual calling forth growth by trying to conjure new debt and spending. But as the Bank of Japan's increasingly insane policy shows, the worse this fake science fails, of course, the crazier central banking will get. And as one of the UK's most successful investors noted last week, "The unintended consequences of monetary experiments on such a scale are impossible to predict" (see page 5).
One consequence, at least on the evidence so far, is that more and more savers will turn to gold and silver for some rare, tangible, indestructible sanity. Okay, such investors might be re-enacting a cargo cult all of their own. Nothing mechanical says bullion prices must rise when interest rates sink and central banks pour money-from-nowhere into the financial markets. But it's a simple guess which a growing number of people make when they see crazy central-bank voodoo trying to burn their savings as an offering to the gods.
Indeed, gold's long bull market starting in 2001 began "within days" of the Bank of Japan first trying QE, says a note this week from analysts at BNY Mellon. It lasted more than 10 years. Gold's sharp rally from sub-$700 during the Lehmans Crash then "came within a week or so" of the US Fed starting QE in late 2008. From there, gold rose 175% to the peak of 2011.
This week, the European Central Bank finally gave details of its $1 trillion QE programme. And as BNY Mellon note, gold's upturn from late 2014's sharp lows came as the ECB...formerly "the most hawkish of the major central banks"...finally said it was getting ready to launch QE to fight deflation.

"History therefore suggests that...the current move could last for far longer and travel much further than might commonly be expected."

Perhaps. But if so, most investors will struggle to see its early stages, especially in Dollar terms. Still, markets turn when the fewest people can see it.