END_OF_DOCUMENT_TOKEN_TO_BE_REPLACED

The CURRENT SURGE in silver prices worldwide might seem dramatic, but it's more measured – so far, at least – than the true silver bubble that went Bang! in Jan. 1980, writes Adrian Ash at BullionVault.

Even so, you might as well call this a record price. In real terms, as Matt Turner at Mitsubishi told me this week, one ounce of silver briefly rose above 40 of today's US Dollars per ounce in 1864, when the American Civil War neared its climax. In nominal Dollars, the Hunt brothers' multi-billion-dollar corner only saw it more highly priced on 5 trading days in Jan. 1980. And while US investors buying silver are waiting for a new intra-day high, it's already broken new ground against the British Pound and for most of the Eurozone, too.

The cause? Gold investors have long claimed the metal is "telling us" something. "First warning" of the looming financial crisis ahead, said Marc Faber in his Gloom, Boom & Doom Report of Sept. '07, was when "the price of gold more than doubled in nominal terms and against the Dow Jones Industrial Average [because of] ultra-expansionary US monetary policies with artificially low interest rates."

In which case, and with global interest rates further below zero today after inflation than at any time since 1980, what in the hell is silver telling us now? 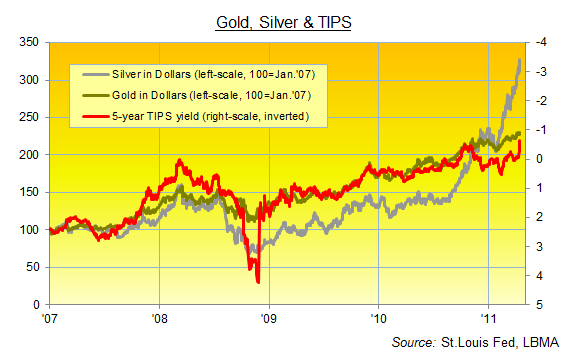 "TIPS pay a lower rate of interest than regular Treasuries," explained Bloomberg News when the yield offered by 5-year Treasury Inflation Protected Securities briefly dipped below zero (and $20 silver broke a 28-year high) back in March 2008.

"[That's] because their principal rises in tandem with a version of the consumer price index which includes food and energy prices. Rising demand for TIPS [which pushes up prices and so pushes down the nominal yield] indicates investors expect the inflation adjustment to make up the difference."

What great expectations TIPS buyers must have of Uncle Sam's "inflation adjustment" today! They're buying 5-year index-linked bonds with a nominal yield of minus 0.6%, anticipating a full 2.8% per year fillip from Washington when compared with the annual yield now offered by conventional 5-year bonds. And what greater hopes still must the new rush of investors Buying Silver hold...rejecting TIPS in favor of metal, and breaking silver's tight connection with both gold prices and TIPS yields as our chart above shows.

Note the point at which silver breaks higher – right when Fed chairman Bernanke vowed to begin QEII in summer last year. That a fast-growing nugget of the world's private wealth is fearful of the result is clear. That silver looks a turbo-charged play is clearer still. Because as an industrial as well as monetary metal, silver is exposed to strong economic growth – as well as loose central-bank policy – in a way that its cousin, gold bullion, isn't. You could point to 2010's record levels of Indian and Chinese gold demand coming off their continued economic booms, but Asia's Silver Investment demand is surging faster still. And the aim of all this easy money, remember, is to keep GDP stoked, whether in Beijing, Washington, Frankfurt or London.

Little wonder then that Chinese, US, Eurozone and UK inflation is rising sharply. And so no wonder either then that...

There's no bull market like a silver bull market, in short. Just ask the Hunt brothers ahead of their bankruptcy, eight years after their attempted "corner" blew up with the big inflation-fueled 1970s' bull market. Double-digit Fed interest rates popped the bubble back then (plus a good dose of anti-speculative action by regulators and the exchanges, of course, otherwise known as "saving the system". It was sparked in turn by the Hunt brothers' own naked greed, otherwise known to them as "simply trying to find an inflation hedge"). The most recent time silver got hot, however, it took oil at $150 and then the Lehman Brothers' collapse to do to GDP growth and commodity prices what central bankers wouldn't dare. Because raising interest rates to double digits to kill a "speculative frenzy" wasn't politically possible.

Silver's bull run, unlike gold's, is all about inflation. Which is worth bearing in mind whether you're quitting, holding, ignoring or looking to start Buying Silver today.

Get the safest silver at the lowest costs using Bullion Vault today...