END_OF_DOCUMENT_TOKEN_TO_BE_REPLACED

SPEAK TO ANY old hand in the gold market about Buying Gold between now and September, and they'll point you to gold's seasonal shape, writes Adrian Ash at BullionVault.

Clearly seen in well over half the 43 years since Gold Prices began freely floating in 1968, the seasonal move tends to be up in spring, down and then flat in the summer, rising in autumn, and then recovering (if not beating) the previous high by year's end, or at least rallying to cut investor losses in bear runs. 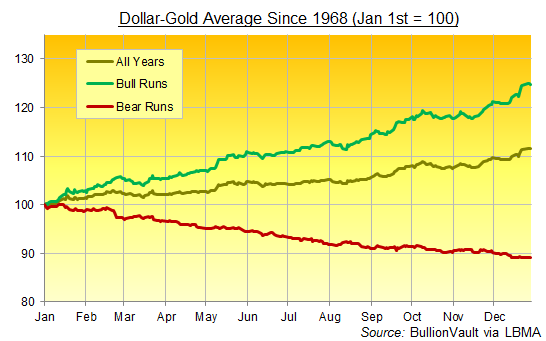 Thus, in nine of the last 10 summers, Dollar-gold has dropped 10% on average from its spring high. It's risen to finish the year higher again in 8 of them. The average wait from top to bottom was just over five weeks. Only 1 of those lows came as late as 1st August. The 1st of September has been like a starting gun for the autumn race to new highs.

Of course, just Buying Gold and then leaving well alone – whatever the season – has been the simplest and most profitable strategy of the last decade, no matter where you got in. Because nice as it is to extend your gains, over trading has been the investor's only true enemy during this bull market so far.

Two curve balls whacked summer-sale traders in particular – the first in 2006 (when gold never quite recovered its startling spring peak) and then in 2008, when the world turned upside down, and the US Dollar actually rose. (Buying Gold with any other currency showed a fantastic gain by year's end, and it still rose 5% for US investors from Jan. '08.)

Now, until today's new record high, 2011 was playing right to script. But at this rate, gold risks running straight into India's festival demand...and then into China's New Year hoarding...without pausing for breath. And while making a new high for the year as late as July or August isn't unheard of (12 of the last 43 years), any significant new highs in mid-summer have typically come amidst real monetary turmoil. Just the kind of mayhem we've got across Eurozone debt markets, in fact.

The US gold crisis of 1971, the Iranian crisis of 1979, the Less Developed Countries crisis of 1982, the Iraqi invasion of Kuwait in 1990, Europe's exchange-rate crisis of 1992, the global banking crisis of 2008...gold's seasonal lull has come unstuck when the kind of events which gold can help defend against strike.

Whether we now get a late seasonal lull or not most likely depends on a lull in the Eurozone and then US debt wrangles. And given the odds of that, longer-term wealth preservation – seeking simply to avoid fresh chaos breaking out in equity and debt markets – might not want to risk trying to finesse the price of Buying Gold so tightly.