END_OF_DOCUMENT_TOKEN_TO_BE_REPLACED

Buying gold was all the rage for central banks net-net during the crisis. But now...?
BUYING GOLD typically signals a lack of confidence in other people, writes Adrian Ash at BullionVault. ( Read part 1 of this little series on the LBMA 2013 conference here...)
Yet even as governments everywhere give investors and central banks new reasons to lose trust, the trend is no longer for central banks to keep buying. Not according to analysis of the latest IMF gold data.
"Central bank activity in 2013 suggests the appetite for buying gold has been whetted," notes Blu Putnam, chief economist at CME Group, in his latest Markets Insights on Gold.
More than that, says the commodities team at French investment bank and bullion dealers Natixis, central bank gold buying – "which two years ago was the driving force behind the price of gold – has not only slowed but actually turned to net selling", albeit of 20 tonnes from this spring's 10-year record aggregate holdings of 31,940 tonnes.
And little wonder... 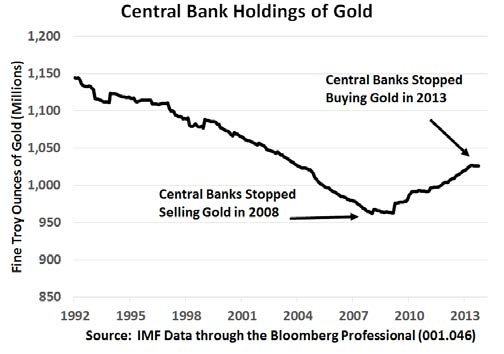 Rather than buying gold, as the CME's chart shows, central banks as a group were net sellers for two decades starting in the late 1980s. Asian and other emerging-market banks then raised their demand as prices rose (and the US Dollar fell). Former sellers in Western Europe then paused their divestment, as the global financial crisis bit hard.
Now, in contrast, "We don't feel comfortable with gold's volatility," said Juan Ignacio Basco, deputy general manager at the Central Bank of Argentina, at this month's London Bullion Market Association conference in Rome. "Even though it's only a small part of the [reserves] portfolio."
This year's volatility in prices has "definitely changed" attitudes, Basco went on, amongst central bankers towards buying gold. Argentina's experience makes a signal example.
Basco's central bank cut its gold bullion reserves as prices fell in the 1990s from 120 tonnes to pretty much zero. But as prices rose, Argentina then bought back some 62 tonnes. The last 8 tonnes were bought at gold's all-time highs in late summer 2011.
Since then? Buying gold at $1800 per ounce has resulted in a 30% loss over the last two years. Spring 2013's waterfall price drops represented "greater than two standard deviation" moves, said Basco. So "we're using options to smooth volatility," he went on. Because with gold so volatile, but falling instead of rising, "We have to do something."
This little titbit – plus a comment from Banque de France director Alexandre Gautier on the same panel – would seem to confirm a point which Natixis flagged 6 months ago, before gold's first sharp decline in April. Which was that, after buying gold to achieve their desired allocation whilst prices were rising, many smaller central banks "have become hedgers rather than accumulators, selling at higher gold prices and buying at lower prices in order to maintain gold holdings within their target benchmark ranges."
Such activity – known to financial wonks as "dynamic hedging" – involves options and other derivatives contracts. No metal is being added, even as prices fall. Because those falling prices, plus the achievement of target levels at the peak in 2011, have spooked emerging-market central banks from buying more gold bullion in 2013. Paper contracts will do nicely, thank you, for fine-tuning the portfolio's allocation to gold.
Hard times can make dynamic hedging less urgent, however. Because as IMF data gathered by the World Gold Council show, Argentina's official gold holdings have remained pretty constant as a proportion of its total foreign reserves. Sticking around 6.5% by value, gold has held steady even as prices fell thanks to the Latin American basket-case's latest economic crisis, which has seen it sell other currencies in a bid to buoy the Peso on the international currency markets.
Even so, the Banque de France – reputedly a big player in the gold sector's lending, hedging and forward selling of the late 1990s – is now "active [again] for other central banks and official institutions" the LBMA  conference learnt from M.Gautier. Certainly, European central banks are sitting tight on their hoards. So those government bodies now keeping the Banque busy, and whether buyers, sellers or hedgers, must be elsewhere.
The big issue, then? China. If only because it stood out by its absence. For the first LBMA conference in five, in fact, China's gold reserves weren't a hot topic of debate in Rome this month. Perhaps because everyone just assumes more gold buying by the People's Bank is par for the course.
China hasn't reported its official gold reserves to the world since 2009. That update added 450 tonnes to the 600 tonnes already declared. Within 6 months, near neighbor and arch-rival for Asian leadership India snapped up 200 tonnes, buying gold from the International Monetary Fund at what soon looked like a bargain price of $1050 per ounce. And while India's private gold demand has since helped tip its trade deficit into a tailspin – leading the government to put a ban on gold imports in all but name – China's demand has continued to surge.
The world's largest gold-mining producer, China's gold buying is likely to overtake India as the largest consumer in 2013 as well. Add up the numbers, and the gap between supply and private demand looks so huge, it's hard not to put the People's Bank right in the frame as the world's gold buyer of last resort today.
Why might that be? Freer to speak than the West European central bankers on the LBMA's panel in Rome, Argentina's Basco still agreed with the Bundesbank and Banque de France's key point. Even if a little less diplomatically. "Gold is a strategic matter, okay?" he told the conference. No doubt he meant from a portfolio view. But politically, gold is plainly highly strategic as well.
Beijing knows it. So does the Indian government. Yet this year's key themes at the LBMA conference – of trust and confidence – were most yoked together by Indian households, weirdly absent from the discussion even as they presented the hottest topic for the 700-odd market professionals gathered in Rome.
Third and final part to come...