END_OF_DOCUMENT_TOKEN_TO_BE_REPLACED

Poland plans new purchases, Russia may return...
GOLD BUYING among central banks will prove "moderate" in 2021 analysts say, potentially acting as a drag on prices after helping support the gold market with half-century records prior to last year seeing the strongest private investment demand in modern times amid the Covid Crisis.
In 2018 central-bank buying rescued the global market from its weakest demand since 2009, reaching the most since the late 1960s before rising still further the following year.
But in 2020 demand from central banks then sank to its lowest since 2010, dropping by almost three-fifths in tonnage terms on newly revised data as surging prices, plus the financial impact of the Covid pandemic and lockdowns, deterred reserve managers at the emerging-economy institutions previously driving the official sector's net inflows.
With 2021 now expected to bring a global economic rebound, "The possibility of capital inflows into emerging markets and the [continued] low interest-rate environment may lead to central banks adding gold for diversification purposes," writes Krishan Gopaul, senior analyst for Europe, the Middle East and Africa at the mining industry's World Gold Council.
But across the official sector as a whole – where No.1 holder the USA has reported no change since 1980 and where Western European states have stopped selling since the global financial crisis of more than a decade ago – January marked "the third month of net sales since June 2020" on the WGC's latest data.
That suggests that while central banks "will stay net buyers in 2021", it will be "at a moderate pace". 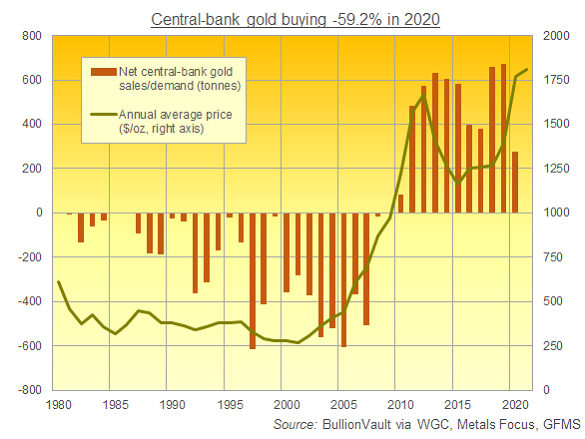 The drop in central-bank gold buying "has been a challenge for gold prices," says analysis from US financial group Bank of America, also pointing to weak jewelry sales and now a "lack of interest" among money managers and other professional investors as the reasons for gold's 20% retreat from last August's new records above $2000 per ounce.
But this week's news from Poland that the Narodowy Bank Polski plans to buy 100 tonnes "over the next few years" now "reminds us all that there exists solid demand for the yellow metal," says a note from the precious-metals team at French bank BNP Paribas – winner of the Global Markets Award from Central Banking magazine for helping its official-sector clients tap the "significant liquidity...without disruption, [of] the London and Zurich markets" during 2020's Covid turmoil.
Announced by Poland's central-bank President Adam Glapiński in an interview with pro-Government weekly magazine Sieci, the move would repeat the net addition Warsaw made in 2018 and 2019.
That took the NBP near the top 20 official holders worldwide with a current total of 229 tonnes.
Leading 2020's big retreat in official gold buying however, the central bank of Russia – having bought an average 205 tonnes every year since 2014 – last year bought just 27 tonnes.
The heaviest official buyer since 2006, the CBR bought over four-fifths of the country's new output – the 3rd largest behind China and Australia – over the five years to 2019, after Western sanctions over Moscow's annexation of Crimea and the war in Ukraine blocked Russian production from reaching international markets.
Moscow suspended those purchases last spring as the oil-price crash caused by Covid (and compounded by Russia's price-war with Saudi Arabia) hit its economy, tax receipts and foreign currency inflows and also spurred a plunge in the Russian Ruble on the currency market.
That drove the price of gold up to fresh all-time highs in RUB terms throughout February to April, and again from July to October. 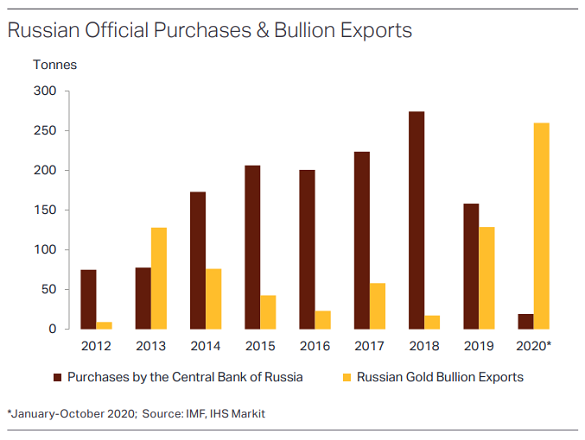 "With subdued gold purchases by the central bank," said specialist consultancy Metals Focus in December, "the majority of Russian gold output this year has been exported, which helped cushion the blow to Russia's foreign exchange reserves amid a slump in oil prices."
Alongside other gold-mining ex-Soviet states such as Kazakhstan, "The fact that gold reserves could be comfortably added to in the local market without affecting foreign exchange reserves...gives [Russia] the flexibility to adjust their buying programmes in the future," the analysis went on.
"As such, it is plausible that central banks will re-consider large scale gold purchases once their economies return to more normal condition."
Aiming to more than double gold's share in Warsaw's reserves to 20% – "well above the accepted norm of a 10-12% share – the proposed buying "propels the Central Bank of Poland into the pro-gold advocates," says BNP Paribas.
"Gold reserves matter to perceptions of the state and its economic strength," said Glapiński.
"Poland is already an economic power in the ascendent...one of the most resilient, dynamic and resilient in Europe, and perhaps also in the world."
The 100 tonnes bought in 2018-2019 were transferred from London for storage in Poland, Glapiński noted, adding that the proposed 100 tonnes would also be kept at home.
Despite the 2019 transfer, the NBP has now consistently kept over 100 tonnes at the Bank of England in London since 1999.
"Certainly," says Polish finance news-site Bankier.pl, " a symbolic moment would be to overtake Great Britain," which currently has 310 tonnes of gold in its official holdings following the early 2000s halving of UK gold reserves under finance minister Gordon Brown.
Poland's fellow 'new EU' state Hungary also made headlines back in 2018 with its gold reserves policy, when Budapest went from 3 tonnes to a modern-era record of 31 tonnes in what its central-bank chief György Matolcsy promoted as "a way to improve the security of the nation's wealth."
Poland and Hungary last week launched a joint legal challenge to the European Commission's "conditionality" rules for receiving Covid stimulus cash from the 27-nation union, reversing their earlier agreement to meet "democratic principles and the rule of law" as yet to be defined by Brussels.
"The Left went too far," said Hungary's justice minister Judit Varga on Facebook.
"Who is to tell us and others for sure whether we are good people?"
"Going forward," says Metals Focus, "we expect the official sector to remain on the demand side, though net purchases are likely to remain modest compared to heightened levels in recent years.
"After all, portfolio diversification remains the key driver behind central banks' interest in gold, especially considering elevated geopolitical tensions."