END_OF_DOCUMENT_TOKEN_TO_BE_REPLACED

Poland keeping over half its gold at Bank of England...
WHAT's in a headline? asks Adrian Ash at BullionVault.
Way too much when it comes to gold and central banks.
"Still trust London with your gold?" asks Kremlin-backed news-site RT.com.
"Poland latest to repatriate its bullion from the Bank of England."
Mwah-ha-ha! Those top-hatted elitist running dogs in London wil be crying into their silly cucumber sandwiches with the crusts cut off this tea-time!
For Poland's flight from the clutches of London's bullion banksters, however, "its bullion" should actually read "some of its bullion".
"Less than half" in fact.
Indeed, Warsaw is only taking home the gold Poland has added since New Year 2019, buying it in London and happily keeping it at the Bank of England pending this apparently long-planned announcement.
But hey, maybe RT.com's English speaking staff don't speak Polish or know how to use Google Translate. They certainly don't seem to think their own readers can. 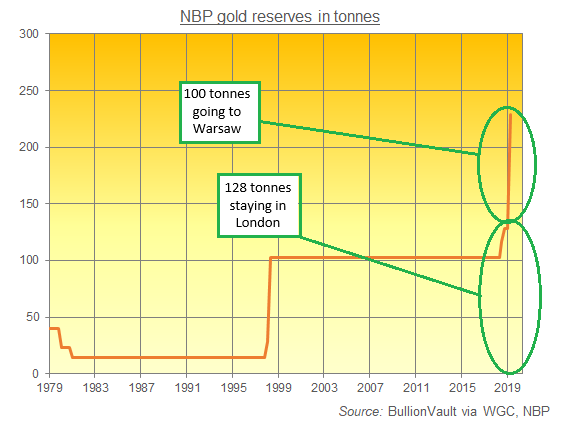 "The National Bank of Poland has implemented a strategic decision by the NBP Management Board to increase significantly the gold held in its foreign exchange reserves," the central bank announced last Friday.
"In 2018-2019, the NBP gold resources were increased by 125.7 tonnes and currently amount to 228.6 tons. Almost half of the Polish gold will be brought into the country and will be stored in the NBP's vaults."
Note that "almost".
The rest, says the NBP, will remain in London. Because for one thing, "The highest quality of gold and high standards of its storage were confirmed during an inspection conducted by NBP employees in the Bank of England in June this year."
A big tick, in other words. So why ship almost half home?
"The strategic nature of gold reserves requires long-term planning," the NBP says.
"Therefore, central banks usually strive to diversify the storage locations of their gold resources in order to limit geopolitical risk, which could result, for example, in losing access to or restriction of the availability of gold resources held abroad."
You might think that's a dig at the Bank of England for not shipping back what's left in London of Venezuela's gold...
...now trapped by international sanctions against the murderous Maduro regime.
But if Warsaw does, amid the global condemnation heaped on Caracas, hear any echo of its more localized spat with Poland's partners of the European Union (mostly over trying to crimp the independence of its domestic judiciary), it clearly feels a very long way from pariah status.
To repeat, all the gold Poland held at the Bank of England prior to New Year 2019 is staying there, including last year's addition. A slightly smaller total, all acquired in London since January – and only now reported in public – will be transferred to Warsaw.
When it comes to gold and central banks however, the trolls of RT don't have a monopoly on sensational headlines. Journalists everywhere seem to want to imply fear and mistrust in the world of central bank gold. The end of London's key role is pretty much a given. Again and again and again.
"Austria wants the UK to give its gold back," accounced CNBC in 2015, also omitting the words "some of". The OENB then held 224 tonnes at the Bank of England; now it's 84 tonnes, with 100 tonnes shipped to Vienna but the other 50 shipped for safe-keeping in Switzerland.
"The distribution to different depositories," explains the OENB, "reduces the risk of concentration on the one hand, while on the other keeping open the possibility of using gold in the trading venues of the United Kingdom and Switzerland."
But who cares when there's a headline to write?
Germany also stressed diversification and liquidity when it shuffled around its national gold holdings – the world's No.2 behind the US – between 2013 and 2017.
"In its storage plan," Buba explained on completion, "the Bundesbank is focusing on the two primary functions of the gold reserves: building trust and confidence at home, and being able to exchange gold for foreign currencies at gold trading centres abroad within a very short space of time."
Yet how did Reuters relay this news?
"Germany brings home gold reserves ahead of schedule," said the news-wire, naturally omitting the word "some" so that its writers wouldn't lose their NUJ cards. As for the Financial Times, it reported "How Germany got its gold back...It was kept abroad to escape the Soviet Union. But then Germany decided to bring it home" and likewise omitting the words "some of" in case readers mistook the news for anything other than a dark day for peace and co-operation.
"Until recently, most of [Germany's] gold was stored in New York, London and Paris. [Then in 2013] the country decided to bring half of its gold back home," the FT went on...
...also neglecting like pretty much everyone else to mention that Germany's holdings in London were entirely unchanged while New York shrank by one fifth and Paris was emptied.
Yes, Buba's London allocation had already been cut at the turn of the millennium, apparently to save money in storage fees. But that was almost 20 years ago, and the heaviest buyers since then have been the home-hoarding nations of China and Russia. It might be a hard sell to attract other central-bank or private bullion to Beijing or too close to the Kremlin.
Still, could London's role as the key storage and clearing point for gold in fact be changing? 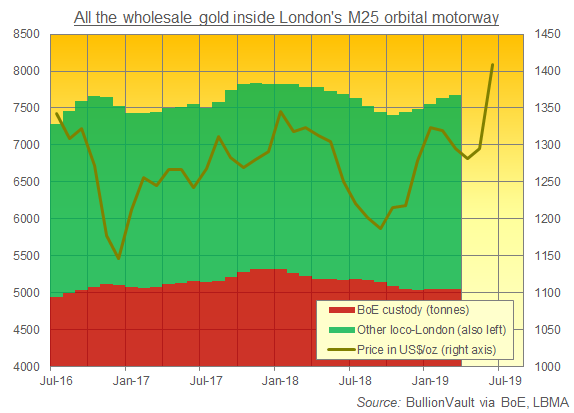 Latest data say the Bank of England was caring at end-March for nearly 20% less gold than at the recent peak of February 2013 – pretty much the peak for investor allocations of all types, and so eve, of course, of the trillion-dollar crash in gold prices, the worst for a generation.
What's more, the quantity of gold entrusted to BoE custody has shrunk to its smallest so far on the available data as a proportion of all the wholesale bullion bars vaulted ready for sale or lending in London. The Bank ended March with 65.9% of London's holdings, down from an average since mid-2016 of 67.6%.
However, the Bank's facilities still account for the lion's share of London's custody provision, and London as a whole remains the single largest location for physical gold storage on earth. (New York comes a close second, thanks to the NY Fed vaulting for foreign central banks but without the storage fee charged by the BoE; no doubt Switzerland holds more, but it's split across Bern, Geneva, Zurich and elsewhere;  likewise, on the best analysis of China's central and commercial banks, they held maybe 5,000 tonnes between them at end-2016, but that's split across Beijing, Shanghai and Shenzhen)
What's more, the 2019 surge in prices will – as the vault data are released – very likely coincide with an upturn in London's use a gold storage point, whether at the Bank, commercial bank vaults, or with the non-bank security specialists. Indeed, physical volumes in London's wholesale bullion market overtook trading in US gold derivatives on late-June's price jump, beating the volume of betting on futures contracts. And excluding BoE custody from the London data says that private storage in the City grew this spring to its largest in at least 3 years.
So, do you still trust London with your gold storage and trading? 'Yes' says pretty much everyone who actually has to decide.
Because the bottom line? Even if you plan simply to keep holding it, any asset is worthless if you cannot sell, lend or borrow against it. Nowhere makes those actions available like London for large gold bullion holders.