END_OF_DOCUMENT_TOKEN_TO_BE_REPLACED

2016 demand to buy gold switches from Asian consumers to Western funds...
REMEMBER when gold prices would shoot to the moon thanks to Chinese demand? asks Adrian Ash at BullionVault.
Slowly liberalizing its gold market from 2002, the world's fastest-growing big economy fast became its biggest gold buyer.
Its giant central bank was buying gold with both hands, too.
Yet prices fell as China's private demand surged to new heights in 2013, and gold fell again as the People's Bank announced just how much gold it had hoarded as well.
Now prices have risen in 2016, yet the PBoC has trimmed its monthly gold purchases.
And with prices driven 25% higher year-to-date by Western money managers, Chinese household demand has also gone AWOL.
That's because most consumers like to buy things cheap. Whereas investors tend to buy into an uptrend.
That's why India's demand is also on the floor. Indeed, word is that recycling flows (of old jewellery and investment bars) has turned higher.
China's central bank has meantime trimmed its rate of gold buying at this summer's 3-year price highs. So too has Russia, growing "tired of gold" according to Bloomberg.
That threatens a key plank of gold-price support, the newswire quotes one analyst. But Moscow's central bank, like Chinese consumers and Beijing, hiked its pace of gold buying all through the 2012-2015 price slump.
Why didn't their demand stem the slump? How come prices risen now they've stepped back?
Money managers in the West have stepped up in 2016, offering Asia's existing gold owners a good profit if they want to sell.
This makes a virtuous circle of the 2013 price slump, when Asia's retail investors and jewellery buyers stepped forward to buy gold from Western money managers all running for the exit 3 years ago.
Physically unchangeable, gold becomes a different thing to different people at different times. For active traders, the money comes in spotting what gold is about to become for which bit of its global market.
And for you? If you're anything like readers of our Weekly Update to BullionVault users, gold offers stability and surety in a world of changing, volatile risks.
Some 13% of respondents to our mid-year survey this July said they first bought precious metals as "insurance", with a further 30% using the words "safety, security, hedge, protection" to describe their reasons.
Defending against change remains the key appeal of precious metals as well, with 26% of respondents saying "geopolitics" will have the single greatest impact on gold and silver prices, while a massive 41% said "monetary policy" will drive prices, thanks to changes in QE and interest rates such as UK savers and investors got from the Bank of England last month.
Backwards looking? Perhaps. Geopolitics has certainly broken higher as a perceived driver of gold and silver prices following the Brexit shock. But faith in the power of demand/supply fundamentals has steadily waned over the last couple of years in favor of central-bank magic. And that fairy dust, after all, is what stockmarkets, housing and the vast pile of government, corporate and household debt now look to rely on.
Why not 'useless' gold and silver prices too? 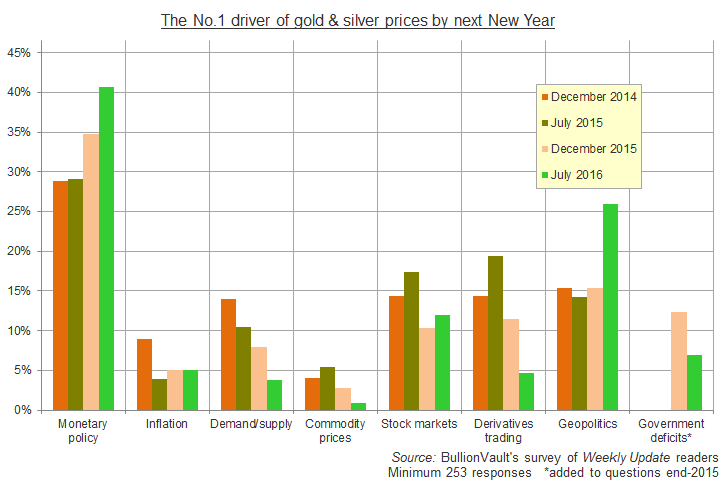 What then of price direction in precious metals? The single largest gold forecast amongst our Weekly Update respondents is for a 10% rise by end-2016, made by 44% of our 315 replies this July.
Silver looks more bullish, at least according to Update readers, with 34% forecasting a rise of 20% by year's end on top of the 43% already gained by then from 1st January.
Both those forecasts are less bullish than so-called "retail investors" might be expected to think. And both fit better with Update readers' views from the end of 2015...when 71% of respondents forecast that gold prices would rise 10-30% in 2016, and 40% said silver would rise 30% or more...than professional analysts now scrambling to reverse their bearish predictions for the end of this year.
Meantime this September, the current dire warnings of collapsing Indian and Chinese demand might just prove a blip.
The death of Asian gold demand has long been forecast, but failed. And Asian households did continue to buy gold during its last bull market, often waiting for pullbacks before accepting the new, higher prices of 2001-2011.
As it is, with the Hindu calendar now ticking off the days until the 2016 wedding and festive season is scheduled to pick up ahead of the Diwali peak, why does anyone still think the US Fed will ever raise interest rates?
That's a trick question, of course. Because it doesn't matter whether the Fed does or doesn't raise rates. Not from 0.50% to 0.75% or even a measily 1.00%.
All that matters is whether the market thinks the Fed will raise...or falls alseep whilst waiting...or falls into a coma during the next deadly-dull speech from Fed chair Janet Yellen.
News meantime says that after Mitsui quit precious metals late in 2015 – ringing a bell at the bottom – another giant Japanese trading house is looking to cut back on commodities.
The timing looks impeccable if you believe that supply and demand will determine prices long-term.
Yes, stockpiles of copper at LME warehouses are now 60% greater than all the gold ever mined in history. Saudi oil output meantime hit a new record this summer, despite the price-crushing glut worldwide.
But the cure for low prices is supposed to be low prices. And after explorers in 2015 discovered only one-tenth as much new oil below ground worldwide as the previous five-decade average, this year's discovery rate is running at barely one-half that sunken level. The US rig count fell to 489 rigs last week, 44% down on the same period last year.
As for gold supply, mining output from Australia, the world's No.2 producer nation, hit a 15-year high in the first half of 2016, defying analyst forecasts of a global slowdown.
That growth, of course, came thanks to the surge in prices from last winter's half-decade lows. That in turn came thanks to the 2016 surge of investment demand...
...and that in turn came thanks to professional investors finally realizing that Janet Yellen is more likely to win the next season of The Apprentice than raise interest rates to any kind of meaningful level.
That's why, according to data compiled for and analysed by the World Gold Council, global investment demand for gold set a new half-year record between January and June.
Led by shareholders piling into exchange-traded trust funds, investment demand beat even the first-half of 2009 as prices jumped 25% – the fastest pace in more than 3 decades in US Dollar terms.
Consumer demand collapsed in contrast (or therefore), as did central-bank demand, with Asian jewellery purchases sinking as small-bar and coin investment barely held flat from a year ago.
"Unusually," says a precious metals note from Australia's Macquarie Bank, "how much gold can go up by might finally depend on supply and demand 'fundamentals', and while likely to improve, they will do so only slowly."
But for the meantime, and to pick up where the world left over before the summer, it is the nature of gold demand – not the quantity – which counts for prices.
Who buys, in short, not how much. Which means why.