END_OF_DOCUMENT_TOKEN_TO_BE_REPLACED

Consumers buy 5% more gold for every 1% rise in GDP, study shows...
GOLD BUYING is boosted more by rising GDP and stronger consumer incomes than by financial crisis, according to a new study from a world-renowned economics professor.
Defying the developed West's common belief that gold is only for bad times, the report confirms what market-development organization the World Gold Council calls "gold's positive duality: its ability to benefit from both the contraction and expansion phases of the business cycle."
The econometric study comes from Avinash Persaud – emeritus professor at Gresham College, visiting fellow at CERF-Cambridge University, and governor of the London School of Economics – who was commissioned by the World Gold Council to study consumer versus investment gold buying both globally and in 11 key countries.
Over the last five years, world demand to buy gold jewelry has accounted for 48% of annual purchases, and a further 10% has gone to electronic products such as PCs and smartphones. With central banks buying 7% on average, and despite the global financial crisis, gold investing has accounted for less than consumer demand – some 35% per year since 2009.
"The new analysis," says the Council, presenting Professor Persaud's findings, "shows that a 1% increase in GDP lifted jewellery consumption by an average of 5%, all else equal." Because "gold jewellery is what economists refer to as a 'superior' good," says Persaud, "where demand increases proportionally more than income."
The same 5:1 relationship applies to electronics demand compared to GDP growth, too.
Although gold investment demand is "much smaller" than jewelry buying, however, "shifts in investment demand can be large and play a critical swing role in the market," Persaud cautions.
Gold investment, agrees the World Gold Council's commentary, "can exert strong pressure on prices over the short (and potentially medium) term.
"However, the longer-term trend is more closely linked to global consumption, savings and, at the same time, by the availability of supply." 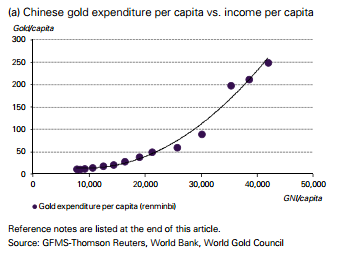 India and China lead world demand to buy gold, accounting for one ounce in every two sold worldwide last year. Asian households' propensity to buy gold is far greater than Western consumers', the report says, because they "typically devote more money to savings" with a real average saving rate around 30% of income. 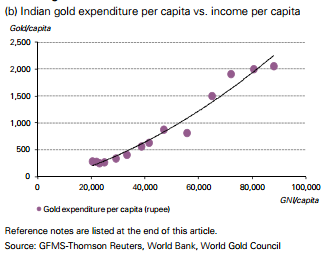 Even so, half of US gold buying "is [also] linked to consumers". US jewelry fabrication will rise 6% this year from 2013, according to leading consultants Thomson Reuters GFMS in the latest Update to their Gold Survey 2014.
On the supply side, says GFMS, US scrap sales – which soared as prices rose during the financial crisis, enabled by companies like Cash4Gold – fell 17% in the first half of 2014 from a year ago.
Such recycling flows from consumer worldwide fell 9% "as the need to raise funds by cashing in gold assets dwindled," the consultancy says, "due in large part to an improved US economy."
"Given a strong price elasticity of demand in many countries," says Professor Persaud – pointing to Asia's huge move to buy gold on 2013's thirty per cent price drop – "a trebling in the gold price [from 2009-2014] should have led to an even greater decline in gold jewellery consumption, and if prices were to stay high, a permanent decline in consumption.
"However, jewellery consumption is also highly sensitive (elastic) to rising income."
In short, concludes the World Gold Council, "It seems reasonable to suggest that positive GDP growth will not necessarily be negative for the gold market."