END_OF_DOCUMENT_TOKEN_TO_BE_REPLACED

UK's Brexit vote blown up your savings? Get in a time machine and buy gold, says everyone...
BREXIT – love it or loathe it, you cannot ignore it, writes Adrian Ash at BullionVault.
Yet everyone seems to think there's still time to get ready.
"Brexit: how to navigate the fallout?" said a stockbroker's email on Thursday...exactly one week too late.
"How can investors handle the Brexit 'black swan'?" asks Investment Week...mistaking a national referendum, announced 4 months in advance – and with only 2 possible outcomes – with a metaphor for events which no-one can imagine, let alone forecast.
Even our friends at MoneyWeek offered last week to show "How to beat the Brexit panic"...despite actively calling for the winning outcome, which already spurred the worst financial panic since Lehman's collapse in 2008.
Bank of England boss Mark Carney meantime "Strikes Preemptively With BOE Crisis Communication Blitz," according to Bloomberg...clearly in need of a dictionary, and a calendar, to go with its war-room thesaurus.
And here comes CNBC to say "Gold could be set for a strong breakout"...a mere 121 hours after gold priced in Dollars did its first $100 day in 3 years, and the metal jumped 22% versus the British Pound inside 5 hours.
Well gee...thanks.
What could you have done in advance? Pretty much what every pundit now recommends you do with hindsight.
Buy gold. Buy major government bonds. Hold cash. Quit your most high-risk corporate debt and equity bets. And sell the hell out of UK housebuilding stocks.
But from here, after the fact, in reality?
"A July hike was already out of the question before Brexit," writes Tim Duy on his Fed Watch blog, looking at the US central bank's options, "while September was never more than tenuous.
"Now September has moved from tenuous to 'what are you thinking?' Indeed, the debate has shifted in the opposite direction as market participants weigh the possibility of a rate cut."
The time to raise US rates – and not only with hindsight – was plainly 2013, maybe 2014, but surely not end-2015 (just to assert 'credibility') and most definitely not 2016. 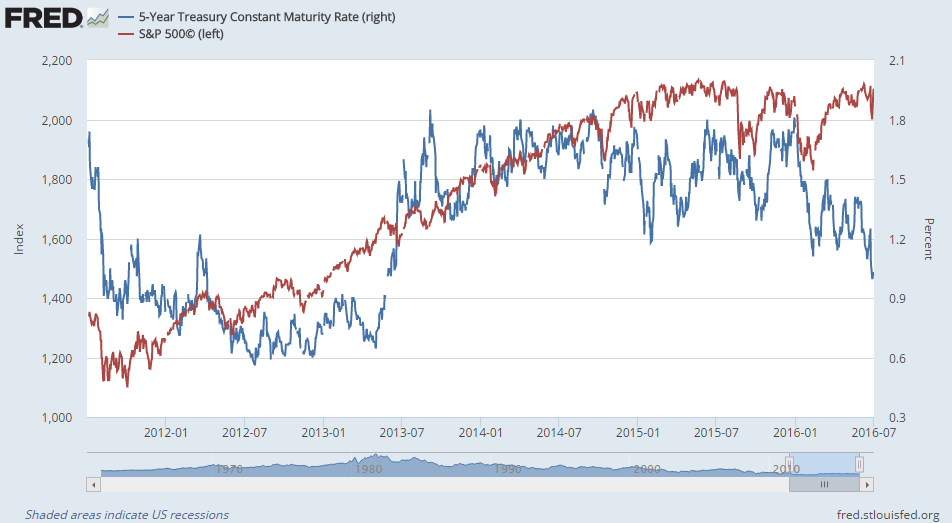 But here we are now, one measly baby-step above nothing, with the Anglo-sphere's other big bank admitting that Brexit makes UK QE a nailed-on sure thing sooner, not later.
They never did re-load the interest-rate gun – pop! pop! – after the financial crisis. Which makes new money creation the only bullets they've got left as a fresh asset-price crash and debt-laden GDP downturn again threatens a true deflationary slump.
Gold and silver aren't guaranteed to keep rising. But they are sure not to get printed into existence. And in our world of uncertainty, that fact never changes.
Used to store value by all cultures in all ages across the world, gold has never gone to zero in recorded history. Universally priced and traded worldwide, it finds a deep, liquid market (daily trading in wholesale gold bullion is larger than all but 4 biggest currency pairs), yet it can be bought and sold instantly as a physical asset which cannot go bust or default, making it pretty much the opposite of a debt investment.
Being physical property, gold is governed by property law rather than financial regulation – law that is strong, simple, proven and well-understood everywhere. Unchanging and needing no maintenance (it doesn't even rust), gold has plainly offered financial insurance to investors holding a broader spread of shares and bonds throughout recent history.
No one knows what comes next, whatever they might claim about November's US election. Unchanging gold is likely to prove an increasingly popular defence. The price rise since Brexit became fact, however, does pose a challenge to new buyers right now.
How much further would gold have to rise to convince them the trend really does point upwards?