END_OF_DOCUMENT_TOKEN_TO_BE_REPLACED

Failing that, ask its pension fund for a few index-linked Gilts...
The BANK of ENGLAND announced its latest policy decision in London on Thursday, writes Adrian Ash at BullionVault.
In effect it told UK investors and savers to buy gold. Because gold tends to rise when interest rates fail to rise faster than the cost of living.
And the Bank of England just confirmed it plans to stay way behind the curve on inflation.
How so?
The Bank’s central projection now says inflation will remain above the 2% target at least until 2021. It further warns of inflationary pressures building from excess demand in the economy by early 2020, right on its 2-year horizon for targeting the cost of living.
Unemployment meantime stands at a four-decade low (on the official data at least), wages are set to see something like growth (or so says the Bank), global economic growth will support the UK (again, that's what the Bank says) and house prices are rising (albeit with "subdued" growth after the recent stab at reviving double-digit annual jumps).
That last data point has long seemed a necessary condition (if insufficient) for the Bank of England to consider any rise in UK interest rates.
Yet instead of tapping the brakes on the UK's bubble-era credit growth and mortgage lending – and despite the Bank's own forecast of rising inflationary pressures – the MPC voted unanimously on Thursday to leave rates unchanged at next-to-zero – way behind the current near-6-year high in inflation – and it voted unanimously to leave its £445bn injection of QE cash unchanged at that record high.
What to make of it? 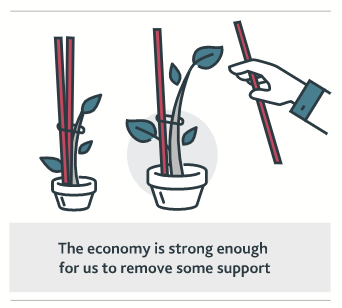 Because the Bank has failed to act in line with its own forecasts, methodology or mandate, the only conclusion is that – contrary to what the currency market suddenly thinks – UK interest rates will not be raised fast enough to offset the rate of inflation.
Adjusted for the cost of living, real interest rates therefore risk falling still further to become yet more negative.
And on that outlook, history (if not actually Bank of England chief Mark Carney) says "Buy gold!"

Over the last four decades, gold priced in Sterling has moved in the opposite direction to the real UK rate of interest almost two-thirds of the time on a 2-year horizon.
Over the last 10 years, that inverse relationship has grown stronger still, with gold and the real rate of interest moving opposite to each other in 74% rather than 64% of all months.
Most telling, the relationship grew stronger still in those months when the pace of inflation had risen from 2 years before, showing in almost 94% of all months since 2008.
Real rates down, gold up in other words. And vice versa. But there's little chance of that on this week's disconnect between what the Bank thinks and says, and what it has actually done.
Luckily for savers and investors wanting to defend their money with a little affordable insurance, the market reaction to Thursday's MPC announcement was almost as perverse as the Bank's decision itself.
Hearing in the Bank's inflationary forecast a "hint" of more rate rises to come (copyright all sub-editors everywhere), currency traders pushed the Pound higher, and gold traders meantime sold bullion lower.
Net result? The UK gold price in Pounds per ounce briefly fell to £937, a discount of 4.5% from this time last month and not too far from December's 11-month lows.
A steep rally isn't certain of course, and gold priced in Sterling has already risen back to last week's closing level at £945 per ounce. Nor should anyone think higher inflation plus low-to-no interest rate raises will guarantee a boom in gold prices either. It's just that, on the historical evidence, that's pretty much how things have worked in the past. And if you won't study the past to plan for the future, just what will you study instead?
Gold has instinctive appeal when real interest rates fall. Because if the value cash savings is dropping, then it makes sense to want a rare, physical, indestructible and un-inflatable asset to hold for defence. Especially one used as a store of value everywhere it's been discovered and traded throughout human history.
Second to gold, one asset likely to do well from a fall in real interest rates would be index-linked Gilts – government bonds which offer a rate of interest and also pay back your original stake adjusted for the cost of inflation.
Oddly enough, the Treasury isn't too keen on selling these inflation-protected bonds to investors. They've accounted for just 17 pence of every £1 of the near £100 billion  borrowed so far in the 2017/2018 tax year. No doubt the Government would rather put the risk of inflation onto its creditors, repaying them a nominal sum in devalued currency when their bonds mature.
Weirder still, the Bank of England is a big fan of these linkers, at least for its own staff's retirement savings.
Ever since its miserable oversight of the Northern Rock bubble became a bust, the Bank has stuffed its own pension fund increasingly  full of the things. Index-linked Gilts accounted for 61.1% of the fund's £4.4 billion holdings at the last count, with a further 29.6% in inflation-protected corporate bonds.
In contrast to this near-91% holding of inflation-protected securities, the Bank's holdings of fixed-interest UK government Gilts shrank yet again in the year-ending 28 February 2017, down to just 9.1% of the Bank's pension pot.
It's hard to overstate quite how heavily index-linked Gilts sit in the Bank's pension fund. On the most recently reported data, it would hold fully 0.65% of all index-linked Gilts now in issue. That's quite a chunk for a fund with fewer than 17,000 members. Scribbling on the back of a fag packet today, we reckon the per person holding is around 21 times the amount of state-issued inflation-protected assets left over for the pension schemes of all other workers and retirees on average.
Fair enough. Buying gold just isn't an option for the publicly-reported retirement savings of the people setting the UK's monetary policy of interest rates and QE money creation. Because it really would say that the Bank's pension fund trustees think inflation is going to outpace cash interest rates by a worsening margin...directly as a result of its own inaction.
The Bank's pile of index-linked bonds merely "hints" at that forecast.