END_OF_DOCUMENT_TOKEN_TO_BE_REPLACED

Investors should be careful what they wish for, most especially for Dollar interest rates...

BE CAREFUL what you wish for. The entire US Treasury market is betting the Fed will cut rates in September. Goldman Sachs expects rates to finish the year at 4.5%, fully 75-points lower from here.

The head of Ford just demanded a cut in interest rates too, and now Bill Gross of Pimco, head of the world's biggest bond fund, says Washington should step in to save US home-buyers – "write some checks, bail 'em out" – before their teaser mortgage deals run out, pushing up to two million families into foreclosure.

But what's the hurry? The US Dollar is already more worthless than at any time in its history according to the international currency market.

The trade-weighted US Dollar closed July 2007 at its lowest monthly value ever against the world's other major currencies. It took a 12% drop in world stock markets to force enough short-covering to cause a bounce in the greenback.

Flooding Wall Street and Main with freshly printed bills – whether through sharply lower interest rates...or through direct intervention by the "Reconstruction Mortgage Corporation" that Bill Gross is calling for – will only remind the world why it was so bearish on the Dollar before the start of this month.

Come Sept. 2007, the only difference will be that we can add the chasm of negative US real-estate equity to the yawning Twin Deficits. And with America's troublesome triplets choking its throat, the only hope for the Dollar would be a swift death.

Long-term support on the Dollar's Trade-Weighted Index had sat around 80 since the mid-90s low. But not any more. 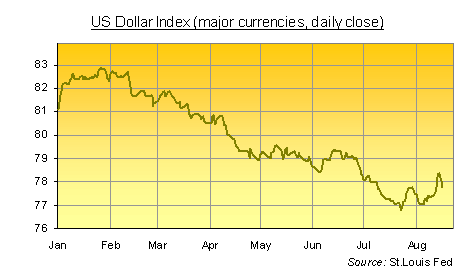 "Someone would certainly be blamed for the ultimate collapse when it came," as J.K.Galbraith wrote in The Great Crash, 1929. "There was no question whatever as to who would be blamed should the boom be deliberately deflated. For nearly a decade the Federal Reserve authorities had been denying their responsibility for the deflation of 1920-1."

It took re-arming for World War II to finally kill the Depression, but Milton Friedman still blamed the Fed for causing the slump nearly thirty years later. Ben Bernanke has gone on to build his entire career on saying "sorry" for the interest-rate hikes that apparently caused the modern world's worst-ever recession.

Indeed, the long shadow of the Great Depression today blocks out most recollections of just how bad things became during the inflationary bust of the 1970s. Investors fleeing into the safe, welcoming arms of US Treasury debt would do well to remember what happened when gains in the Consumer Price Index overtook bond yields between 1973 and 1980. (They might want to recall what happened to Spot Gold Prices when the same thing happened between 2003 and 2005, too.)

But the current Fed chairman has played no small part in ensuring that flared pants and double-digit inflation have been replaced by the 1930s deflation as the big ghoul from history most feared by policymakers, central bank wonks and investors worldwide.

"During the major contraction phase of the Depression, between 1929 and 1933," as Bernanke said in a speech of 2004, "real output in the United States fell nearly 30%. During the same period, according to retrospective studies, the unemployment rate rose from about 3% to nearly 25%, and many of those lucky enough to have a job were able to work only part-time."

By comparison, the 1973-75 recession – "perhaps the most severe US recession of the World War II era," according to Dr.Ben – real output fell 3.4% and the unemployment rate merely doubled from 4% to 9%.

"Other features of the 1929-33 decline included a sharp deflation," he went on. "Prices fell at a rate of nearly 10% per year during the early 1930s – as well as a plummeting stock market, widespread bank failures, and a rash of defaults and bankruptcies by businesses and households."

Fast forward to late summer 2007, and Bill Gross has bought into the Bernanke Fed's worst-case scenario, adding the full weight of his $692 billion in bonds under management for good measure.

"Market forecasters currently project over two million [housing] defaults before this current cycle is complete," says Gross in his latest comments. "The resultant impact on housing prices is likely to be close to minus 10%, an asset deflation in the US never seen since the Great Depression.

"The ultimate solution, it seems to me, must not emanate from the bowels of Fed headquarters on Constitution Avenue, but from the West Wing of 1600 Pennsylvania Avenue. Fiscal, not monetary policy should be the preferred remedy, one scaling Rooseveltian proportions..."

In short, the very crisis for which Ben Bernanke has been waiting to prevent all these years is beyond his meager talents. Bill Gross reckons that even a 200-300 basis-point cut in the Fed Funds rate would still leave the vast bulk of re-setting homebuyers facing monthly mortgage repayments they simply can't bear.

"Write some checks, bail 'em out, prevent a destructive housing deflation that Ben Bernanke is unable to do," he advises George W.Bush, claiming that Depression-era fiscal meddling will somehow avoid weakening the Dollar. That will only happen, however, for as long as the rest of the world keeps debasing its money at the same rate as Washington. And that, in turn, will only protect US investors for as long as fixed-income fund managers can pretend that bond-interest coupons aren't being eaten alive by inflation.

The Bank of England summoned up £314 million from nowhere on Monday, making a short-term loan to cover a gap in Barclay's cashflow. Four of Wall Street's finest borrowed $500 million each from the Federal Reserve on Wednesday. The European Central Bank injected €40 billion in three-month loans on Thursday (around $54.2 billion). The offer was snapped up by German and Italian banks unable to get short-term funds in the market.

On the other side of the trade, meantime, the cost of natural resources continues to push higher, even as Treasury bonds surge. Wheat futures just hit a new record high, after India – the world's second-biggest consumer of the grain – invited bids to help it buy an "unspecified" quantity of wheat to help expand government stockpiles. Global inventories, says the US Dept. of Agriculture, will fall to a quarter-century low by next June.

Soybean prices are also rising, as China's domestic output is likely to fall after a prolonged drought – potentially losing 17% from last year and causing imports of 31.4 million tons in the 12 months beginning Oct. Copper imports into China, meanwhile, doubled in the year to July, said the Beijing customs office last Wednesday.

The only US data report that showed a double that day was the number of foreclosure notices sent out in July to late-paying US homeowners. Investors fearing a sharp cut in US interest rates, even as the cost of living continues to rise sharply, may want to consider an allocation to Physical Gold Bullion.

During the negative real interest rates of the late 1970s, Investment Gold more than quadrupled to its all-time high of $850 per ounce. Its greatest gains during the current bull market so far came when US interest rates again dipped below the rate of inflation between 2003 and 2005.

To Buy Gold Online Today – as near to live "spot" market prices as private investors can get – be sure to visit BullionVault now...