END_OF_DOCUMENT_TOKEN_TO_BE_REPLACED

Flush with British Pounds at a 27-year high against the Dollar, they poured something like $4.6 billion into US real estate according to data from the Association of International Property Professionals (AIPP).

Now the Pound's slipped back, but so too have Florida house prices. So cue Fannie Mae to target British holiday-makers.

"Homes Available in USA," says a Google advert – visible only to web surfers inside the UK it would seem – from the US-government backed mortgage agency.

If you're inside the fifty states, most likely you won't find it. Which would only be tactful.

There are plenty of "holiday homes" to choose from in the USA right now, not least on Fannie Mae's books. Single family homes in Miami, Florida, for example, start at just $45,000. The last time a first-time buyer in Britain could snap up a starter home for that price – around £23,000 – was 1991.

Even then they had to buy far outside the "hot spots" of London and the South-East. At least 150 miles away, in fact. The last reported sighting of a London home costing less than $50,000 equivalent was back in 1985. Today the average apartment in the UK capital costs six times as much.

But hey, that's inflation for you! And flicking through the huge range of cut-price real estate now on sale at Fannie Mae today, three things about the decade-long inflation in real estate prices now imploding on both sides of the Atlantic continue to amaze us here at BullionVault.

First, the sheer volume of foreclosures sweeping the former hot spots of America. Second, the size of house price "discounts" about to hit the United Kingdom. And third, how-in-the-hell anyone ever thought subprime mortgages sounded like a good idea. 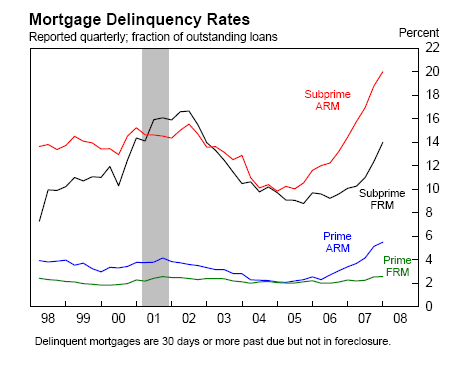 As the chart above shows – courtesy of Janet Yellen of the San Francisco Federal Reserve – late payment rates on subprime US mortgages stayed above 9% even when the cost of borrowing sank to a four-decade low (and stayed there) between 2002 and 2005.

Teaser rates of just 1% interest, in other words, left almost one-in-ten subprime borrowers unable to meet their monthly mortgage bills. So the profits assumed by "resetting" those rates to 7% and above two years down the line were never going to show up.

As in not ever. Any bank day-dreaming otherwise deserves euthanasia, let alone bankruptcy.

What they're getting instead, however, is a fresh dose of money from the Fed. The US central bank is actively creating a market in mortgage bonds, accepting these illiquid assets as collateral against loans of highly liquid US Treasury bonds.

Will the money thus released to the banks find its way back into US house prices? Whatever happens on your street in 2008, subprime lending as a financial product is dead – if not for good, then at least for now. Issuance of residential mortgage-backed bonds collapsed by 95% during the first three months of this year, according to data from SIFMA, the securities association. The futures market expects a further 25% drop in US house prices, notes Janet Yellen of the Fed, based off the price for Case-Shiller index contracts.

And now the UK property crash has finally turned up as well – a mere three years after everyone thought it would – the chances of British holiday-makers supporting the Florida real estate market look pretty slim too, despite Fannie Mae's advertising dollars.