END_OF_DOCUMENT_TOKEN_TO_BE_REPLACED

Forget "credit easing". It's the Bank of England's own QE that needs, ummm, more QE...!

JUST LIKE PRINGLES – the tasty potato snack – quantitative easing is awfully more-ish, writes Adrian Ash of BullionVault. But unlike Pringles, QE doesn't come with a resealable lid. So the famous sales line is truer still for central bankers:

Ah yes, barks the historian, lurching out of the gloom of the library stacks. This is how Germany's infamous Weimar Republic moved from something like sanity to madness inside three years. A trickle when it started, "more and more paper [poured] from the Reichsbank presses" by January 1923, writes Adam Ferguson in his well-thumbed history, When Money Dies.

"During February the note circulation was being increased by a matter of 450 milliards every week. On a single day in early March, by way of Treasury bills discounted at the Reichsbank, the floating debt was increased by 800 milliards."

A milliard? It used to mean 1,000,000,000 – formerly known as 1,000 million but now called one billion even though it's a thousand times smaller. Still, that's inflation for you. One billion buys much less than it used to. Just ask Mervyn King.

"There is not enough money in the economy today," the Bank of England governor told ITN News on Thursday (and Sky, and the BBC, and everyone else) as he tried to explain why his team is adding £75 billion ($115bn) to the £200bn of quantitative easing they tried in 2009.

"That is why we have taken this measure to create money, in order to ensure that there is sufficient money to support the recovery, to support jobs, while ensuring that inflation remains close to our target."

Hmmm. Mervyn King's target – of 2.0% annual inflation on the UK's official Consumer Price Index – hasn't been hit since autumn 2009. Inflation is now running at 4.5% per year and has exceeded Mervyn's official 3.0% limit in 20 of the 29 months since he first got his hands all covered with ink. So whatever this apparent "lack" of money might be doing to the UK today, it's hardly pulling down prices.

Nor will the new money help private-sector investment, not directly, even though – just this Monday – UK finance minister George Osborne declared he wanted "Credit Easing" to kick-start new borrowing by business to jump-start new growth. Poor George! He must have thought his birthday had come on Thursday morning, when Mervyn wrote to say the Bank wanted to print a fresh six per cent's worth of GDP in new cash.

"The structure and operation of the Asset Purchase Facility would be unchanged from that described [by] your predecessor," the governor winked in his letter.

"The APF continues to include facilites for eligible private sector assets," the chancellor winked back, "authorised up to a maximum of £50 billion."

But not so fast! Within minutes of this cheery exchange being posted for the world to enjoy on the Bank's website, up went the Bank's plan for how it will spend this new money – every last penny on government bonds, and none of it on private-sector assets or loans! 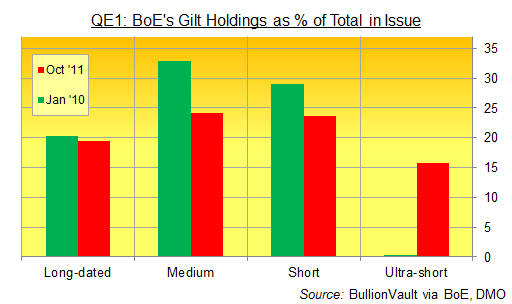 Of its first £200bn in quantitative easing, the Bank of England spent all but £1.7 billion on UK government debt. Like the name says, the effect was to "ease with quantity" – pushing down longer-term interest rates, which the Bank can't ordinarily change through trading short-term debt bills, by bidding up longer-dated government bonds.

Government bonds pay a fixed income each year, so the higher the price, the lower the yield to new buyers. Hence the lower interest rates for other borrowers in the economy.

Trouble is, government bonds don't stand still. They shuffle towards maturity – that happy day when the current owner gets repayment of the money first borrowed by the government. And as our chart shows, this slow shuffle has changed the way the Bank of England's gilt holdings stand, even though it's holding the very same UK gilts it bought between March 2009 and Jan. 2010. QE1 is moving towards the short-end of maturities. Hence the need for QE2. Because since the start of last year, that 70% of the Bank's £198bn spent on medium and long-dated gilts has turned into 60%. That means the 30% of its money spent on "Short dated" gilts has now become 40% held in "Short" and – yikes! – "Ultra-Short dated" gilts, set to mature in 3 years or less.

You won't need reminding how tight the UK's public finances are right now. Mervyn King certainly doesn't. But he does seem to think the chancellor needs telling – and pretty much in public, too. Because this new round of quantitative easing is aimed at easing one problem above all others: the first dose of UK QE now needs a cash injection.

Fully 16% of all that money printed last time around is starting to pile up at the short end...about to turn back into real cash. So to rebalance the queasing, trying to keep long-term rates down but with the government's total debt very much larger, the Bank has no choice but to target medium and longer-term gilts once again, buying (no kidding) 3-10 year gilts on Mondays, 25-year-and-over on Tuesdays, and 10-25 year debt on Wednesdays.