END_OF_DOCUMENT_TOKEN_TO_BE_REPLACED

Who killed the UK recovery? UK households of course, finally saving not spending money they don't have...

DELEVERAGING, like Hamlet's nothing, is only good or bad when you come to think about it, writes Adrian Ash at BullionVault.

And what view you choose speaks to your moral view of the world too, and so to your economic theory as well, acknowledged or not.

Take UK households, for instance. By September 2008, their net debt – their total savings minus their borrowings – were equal to 20% of the UK's annual economy. People owed the banks £300bn more than the banks owed to them. 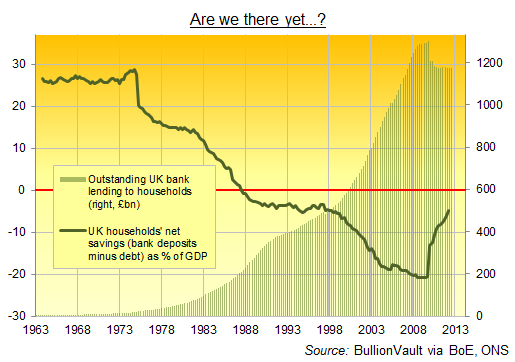 Over the last four years, UK households have cut their debt and grown their savings faster than any time on record. They have delevered by more than 15 whole percentage points' worth of GDP – a "cost" to the economy of £235bn in current spending. Or if you prefer, a long-needed boost to household assets after two decades of spending beyond our means.

Of course, the savers and the debtors aren't all the same people. Poor pensioners still trying to pay off their mortgage are very different in spending and financial behaviour from young City workers struggling to spend last year's bonus. Yet across the UK as a whole, people's response to the financial crisis – or rather, their role in creating the economic fallout – has been the same: to cut spending as never before.

The retained money has either gone to paying down household debt (some £104bn on the Bank of England's figures) or building household savings (which have risen by £133bn). Anyone wondering why the UK economy has failed to recover as rapidly as after previous post-war recessions has a good part of their answer. The question now is how much further this deleveraging could run.

Fifty-odd years ago, net banks savings amongst UK households totaled some 26% of GDP on average. That cushion (or "dead money" depending how you see it) got chewed up by the 1970s' inflation, itself tied up with the surge in consumer debt which credit cards and the mass commercialization of hire-purchase wrought.

By the end of the 1980s, we'd tipped from net savers to net debtors. But it wasn't until 15 years ago that the second-leg of Britain's household leveraging got started. That swoon took 10 years to reach the record net debt of 2008. It's been unwound in less than half the time, despite the Bank of England urging people to borrow with zero interest rates, and urging others not to save with quantitative easing.

Can the UK bear another 15% of GDP in household deleveraging? That would only take us back to 1983's level of net savings. But it would likely gut the UK banking sector, let alone the shopping malls.

Again, whether that's good or bad is your personal choice. But policy-makers have so far been powerless to prevent it.